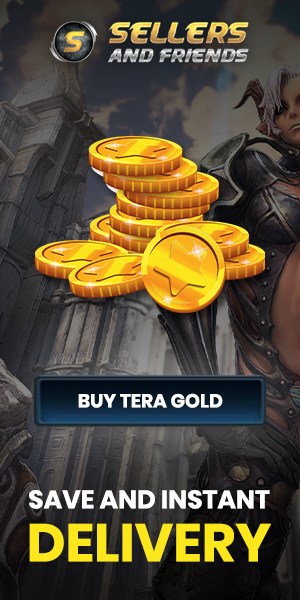 Your account can quickly become much stronger in TERA. Getting a level 65 character all by yourself may take some time, but there are some ways around it. Of course, you can search through the internet and find a guide that will be helpful, but there’s an even faster way. TERA power leveling will get you to endgame so quick, you won't believe it!

Buy power leveling services to increase the amount of fun you have in TERA. Skip some of the boring days of hard work and grind and get yourself a boost! Enjoy some of the most mechanically intensive combat you can find in MMORPGs.

TERA (which is an abbreviation for The Exiled Realm of Arborea) is a Korean MMORPG developed by Krafton. The game was released on Windows in 2011 for South Korea and in 2012 for Europe and North America. In 2018 it started being available on Xbox One and PS4. It quickly became one of the top MMORPGs for consoles.

It is set in a high fantasy open world. In a genre that’s famous for its massive PvP, captivating dungeon crawling and riveting raids, TERA manages to stand out with it's over the top anime-style epicness. Use your skill to kill the enemies standing in your way!

There’s also new content continuously being added to the game. Developers are expanding the world and adding new locations as well as many other features. One of the added features is a fun battlegrounds arena called Kuma’s Royale. Every now and then there’s also a new event that keeps TERA interesting and attracts more and more players.

The epic world of TERA

Developers themselves coined the term BAMs (Big Ass Monsters) to call some of the bosses you can fight in the game. The notion of monumental fantasy adventure is omnipresent in TERA. You can see it in the design of cities and locations, as well as weapons, armor and even the playable races.

Speaking of races, there are seven of them, with Humans and High Elves being some of the more standard ones. Players can also pilot Amani – the physically strong descendants of dragons, the wise and peaceful Baraka who are related to Giants, the relentless and individualist Castanics, the nature-loving Elin who never age and finally sly and curious Popori – the animal-like nature spirits. Pick whichever you want and play!

The power of fast paced combat

The most unique aspect of TERA is the dynamic combat system. Forget the boring point and click stat checking fights and projectiles that act like homing missiles. In this MMORPG it’s not going to be that easy, you have to aim your attacks and dodge the incoming ones to avoid damage.

When the game was released in 2011 this approach to fighting was truly revolutionary in the genre. After all, this was the time when MMORPGs started losing some ground and a meaningful part of player base to more mechanically demanding online games, like MOBAs and multiplayer shooters. Challenging players with aiming and dodging attacks was a breath of fresh air in this kind of games.

As in many other MMOs getting your character to max lvl may take some long hours. If you want to skip that, you can just buy a power leveling service that will get you from level 1 to level 65 in no time! On the Korean server, the level cap has been already increased to 70, this change will soon come to other regions, making this service even more useful. Completing quest after quest to reach the desired level might be just too boring.

Instead of doing the boring and repetitive quests over and over again you can just take a fast way and purchase a good power leveling service at MMOAuctions. No more grinding, instead you can enjoy fighting in the high-level PvP, unlocking achievements and clearing the most difficult dungeons.

Jump straight into the most thrilling action that TERA can offer thanks to the powerleveling, it will get you to late game quicker than any of the online guides! The real fun in MMORPGs always begins near the max level or even after getting it. Often the best way to enjoy the game is getting to that point instantly, without having to get through the early game. The power leveling service is the fastest way to get enough exp to get you there. To learn more about the process you can always ask the seller a question.

If you’re looking for any other TERA related content you can browse MMOAuctions and find a lot of accounts, bots, gold, and items. Furthermore, there are all sorts of virtual goods associated with over 100 different online games such as Guild Wars 2, Black Desert, Tree of Savior, Blade & Soul, Path of Exile, Division 2, Archeage, Elder Scrolls Online, League of Legends and many more!

MMOAuctions is a website where gamers can buy and sell their virtual goods. We are not an online store nor a middleman service. Our purpose is to create a platform for players to find everything they need to improve their gaming experience.

To take part in all the trade of virtual goods that happens at MMOAuctions you need to log in or sign up. To create an account you‘re going to need an active e-mail address or a pre-existing Facebook, Google+ or Twitter account. The registration and posting standard offers is completely free. MMOAuctions doesn’t take any provision from the transactions. Join our site, post your own offers now and make some money on virtual goods.

To ensure the security of the online trading we implemented a tool called Scam Killer. It collects data of people who scammed other traders in the past. We recommend using it during every transaction. It takes very little time, you just type your trading partner’s contact information to the Scam Killer and check if anything shows. If he’s not in the database, you’re probably safe. In situations where the person you’re dealing with is in there, you should terminate the deal immediately, it’s basically dodging a bullet.

We also encourage to take other safety measures. After years of experience in trading the virtual goods, we learned to notice some patterns and the most common red flags. Scammers are always in a hurry, they try to finish the deal with the speed of light. They don’t want you to have enough time to check their story and think everything through. If they’re pretending to sell content, they will often downplay and degrade the competition. They often set the prices much lower than everyone else, to attract as many people as possible. If you find an unbelievably favorable offer, remember to stay extra careful.