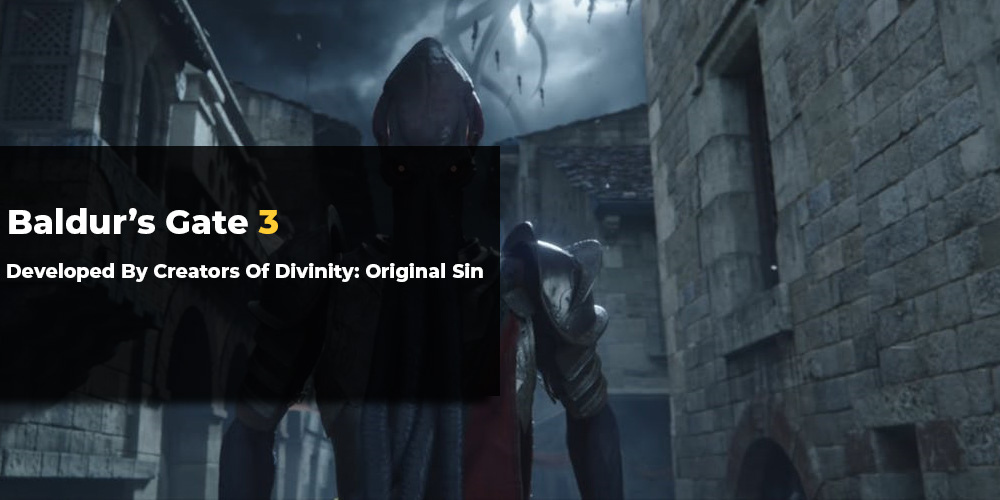 What a time to be alive. After two beautiful, praised games, and after almost two decades, most seasoned RPG players will once again have a chance to create a party of brave adventurers to decide the fate of the world. 18 years we’ve waited for this moment, at it’s happening right now. We’re finally going home. We are returning once again to the Forgotten Lands, to bring a new light of the day, or to leave it in eternal darkness.

According to the claims of this wonderful Belgian developer - Baldur’s Gate 3 will have its release somewhere around the end of year 2019, and the beginning of year 2020, with the game that will be based on the most current Dungeons & Dragons 5th Edition system, having some sweet touches of Divinity: Original Sin 2, while still remaining true to the original series. Larian Studio will surely once again bring something new and fresh to the table, but still something of a very familiar taste, even though Baldur’s Gate 3 will start out with a distinctively new chapter in this legendary series.

Belgian developer released an announcement trailer on this year’s Electronic Entertainment Expo (widely known as E3), and internet absolutely exploded. On said trailer (that you can find on the bottom of the page), the first thing you’ll see is a panorama of the city of Baldur’s Gate, as the camera switches to the view of the streets, we can see one of the members of a famous mercenary group - Flaming Fist - exhausted, panting from an apparent fight, as he stumbles through the streets passing the corpses of his fallen comrades.

His vision slowly deteriorates, and as we hear some dark voices in his head, camera switches to the first person perspective, presenting us with a wonderful dolly-zoom, as the character visibly loses his mind. Suddenly, the mercenary pukes a large amount of blood, losing some of his teeth. Trailer quickly descends into a gruesome body horror, as parts of his skull start to collapse in front of us, his fingers twisted and broken, his human eyes slowly changing to an eyes of a monstrous creature, before we cut to black we get the last glimpse of four tentacles ripping and tearing through the skin and muscles of his human jaw.

As the music cue starts to raise from within the darkness we can see the final form of a humanoid Lovecraftian-like creature, with a face full of tentacles, and a gaze full of hatred, slowly beginning to levitate above the ground of now dark, and covered in the mist city. The monster gets closer and closer to us, camera slowly rises, showing a dark cloudy sky, as a thunder pierces through the darkness we get a short glimpse of a Nautiloid - a bizarre and tentacled Mind flayers’ ship - hovering over the fallen city, before we cut to the title card.

One of the greatest titles in the RPG gaming world, being created by one of the most trusted RPG developers currently on the market is the best case scenario, not only to fans of the series, but also for those that enjoy latest RPGs. Larian Studios planned to get involved into making a new Baldur’s Gate title long time ago, but the owners of the series Wizards of the Coast, were reluctant to then very green and inexperienced developer. However, after the two very popular, innovative, and critically acclaimed Divinity: Original Sin series, that belong to the best Roleplaying Games of all time, after contacting Wizards again, and presenting their core ideas for the newest Baldur’s Gate, Larian Studio was allowed to continue working on this project that in a few months will be playable on our personal computers as the newest Baldur’s Gate installment.

Currently, there are over 200 people that are working on the game internally, and a little bit over 100, working externally to make this game, this dream of veteran RPG gamers - finally come true.

What Can We Expect?

One thing is for sure, the newest Baldur’s Gate will hold a strong resemblance to both installments of Divinity: Original Sin. There are lots of mechanics that were completely original and innovative in the RPG world, and widening the range of those fresh mechanics will be an important aspect of Baldur’s Gate 3. As said by Swen Vincke, the Founder of Larian Studios - it would’ve been a shame to go back with their staple mechanics, and not include them in their newest title. Therefore we can for sure expect lots of environmental storytelling, even more advanced combat system, and engaging story, that you will be able to craft yourself in some instances.

Baldur’s Gate 3 will play out like a classic tabletop RPG session thanks to the D&D system. To get involved with the story - you will have to create your adventurer, or adventurers. You won’t be only filling your character’s skills and abilities. You will also choose your character’s background, personality traits, ideals and his own set of values that will enhance your immersion, by letting you create the exact character that you want to be the part of that glorious bigger story. Smart, eloquent Mage? Unstable and hateful Berserker? A greedy and sociopathic Rogue? You should be able to create each image of a fantasy character that you imagine.

While it’s not for certain, Vincke said he is also interested in bringing some pre-made characters into the mix, just like in Divinity: Original Sin 2. These characters would have their own origin story, which would lead them through various bonus unique quests. In Divinity: Original Sin 2, we had a mystical Skeleton that would play a major role in the main story of the game, a bard with a second personality, with an evil voice inside her head that would turn her hostile to party members, or a fallen Prince of a Lizard Kingdom, searching for revenge and redemption. We could expect something like that included in the newest Baldur’s Gate.

While it’s not guaranteed, fans of this Belgian Developer assume, that we might also get a Gamemaster mode in this game, that will allow one of the players turn into a god, that will shame his own world and entirely original story, for other players to enjoy in the real time. If you love tabletop, pen and paper RPG games with your friends, and sometimes you can’t find time to gather in one place - you will be able to do that in an amazing game on your computer in real time, with some additional preparations. How amazing is that?

And of course - Multiplayer Cooperation system should also find its place in the game. Larian didn’t feel keen on announcing how it will work just yet, but we can expect something very similar to the Original Sin series. Meaning that each players will be able to spread out, and do whatever they would like to do. One player may decide to clear a dungeon, second will go to the trading spot and pickpocket every merchant in the district, and another one might just sit at the tavern and play dice with a pack of dwarves

Best RPG of all time inncoming?

As Vincke said in one interview - Larian Studios is not going to release the game that they wouldn’t want to play. And by the looks of it, looking at their previous latest titles that they’ve released - they sure as hell want to play wonderful, engaging, and epic games. Therefore, for the most part, there’s nothing to worry about. The game is objectively speaking going to be a blast, as long as the publisher doesn’t push for an early release date.