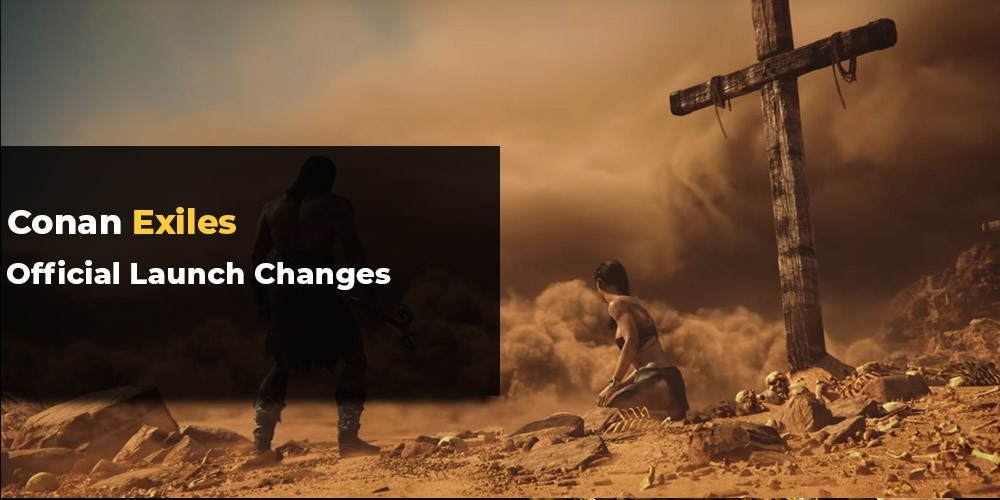 Conan Exiles arrived when early-access survival games were at an all-time high. Many took this title as Funcom's desperate attempt to monetize on the genre-hype at the time. But despite all the doomsayers and troublesome early access phase, Conan Exiles is finally reaching its official release!

What is Conan Exiles?

Conan has come a long way since it released as an early access Steam title back in January 2017. Featureless, buggy and boring, back then it didn't look as if the game will ever reach the full release. Even tho early phases were difficult and gathered some severe criticism Funcom kept on adding new features and improvements to the game. Complete overhaul of AI, improved combat, climbing, levelling revamp, new areas are just some of the things added over the last year and the amount of work done is really impressive. With the full release on the 8th of May Funcom pushes Conan even further nearly doubling the size of the world, adding further improvements to combat, new equipment, gods and more.

So what can we expect at launch and beyond?

Say farewell to aimless swinging of whatever you have in your hands. New combat system introduces unique moves, combos and style to every kind of weapon (swords, daggers, hammers, maces, spears, greatswords, bows). Combat animations are also improved to make every cleave, slice, thrust and lunge feel natural and impactful. Different weapons have their own set of light and heavy attacks that can be combined into a chain of moves increasing their damage, also various combinations will grant extra effects, for example, good combo with daggers will leave your opponent bleeding while hammers will sunder your enemies armour.

Mid-way into early access Conan Exiles received "Frozen North" expansion doubling the size of the map. When Conan Exiles hits full release players will get another two unique biomes. Ashen plains surrounding an active volcano to the north and swamp to the east. Both areas offer unique dungeons, resources and mysteries to uncover. Frozen North introduced players to new deity and avatar: Ymir. This time we will be able to worship mistress of life and death, harvest and rot Derketo and her avatar that's half-beauty and half-corpse.

Anyone who has ever played any online survival game knows how fast servers become littered with abandoned buildings, small makeshift bases and annoying access-blocking walls not to mention one dominating tribe having fortresses scattered all over the map forcing new players to build in areas void of any resources. Conan Exiles decided to remedy this adding the purge mechanics. The longer you play, the more you build and kill you are increasing your "purge meter" when the meter hits 100% you have to prepare to defend yourself against hordes of zombies, gorillas, locust or giants attacking your structures.

Levelling up in Conan Exiles used to be pretty basic for any cookie-cutter survival game. Gain experience for doing basically anything, level up, spend points into attributes (usually half of them is completely useless) and learn some crafting designs. Now developing each stat comes with extra perks, for example, spending fifty points in agility lets you perform a double jump while having ten points in survival allows you to eat raw meat without feeling sick.

Fans of alchemy in Conan Exiles know how hard it is to get the proper materials for various potions. Now you can combine your brewing passion with newly introduced agriculture and grow plants you need yourself. Which is now even more important since on full release players will no longer regenerate health over time and will need food and potions to stay alive. Even at the very beginning of Conan Exiles lifespan, getting anywhere from one corner of the map to another was quite a trip, now, with map almost three times as big the distances you'll have to beat increased, even more, that is why you can now craft a huge map-like detailed sculpture that will allow you to teleport to the monoliths scattered around the exiled lands.

Apart from these new features, Conan Exiles has undergone a massive rebalancing in combat, traits, feats and crafting.

Will Conan Exiles live up to the initial hype? Will we finally get a proper game set in legendary Hyboria? Time will tell, Funcom has done an impressive job in making this mediocre, empty, "just another" survival into something that can redefine the genre. Will they succeed? Time will tell.