EVE Online Caldari Ships - What you may expect 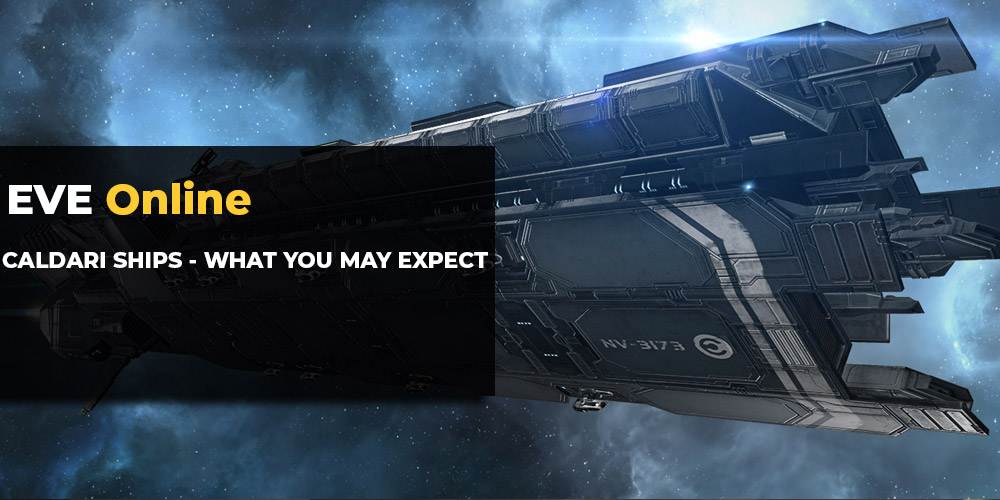 Caldari Ships are some of the most known “mission runners” out there, often being capable of completing missions tier higher that they are made for.

Caldari State ships are, in general, slow ships (still not as slow as Amarr Ships) with a very good range. Extremely capable for PvE content even tho they have relatively small drone bays. Thanks to high CPU they can fit a very solid passive shield tank. Utilizing the strengths of both Hybrid Turrets and Missiles their ships are extremely versatile.

Almost all Caldari ships are shield tanks, combined with their high CPU they can fit a massive passive regeneration tanks for PVE or a very efficient buffer/active shields for PVP. There are pros and cons to every “tank style”. Caldari ships with active shield tank can soak way more damage than its armor counterpart but can hold for a shorter time. Shield tanking does not reduce agility and speed unlike armor tanked ships but they suffer an increased signature radius which makes them easier to hit.

Missiles are usually weapons-of-choice for Caldari pilots as many of their ships have bonuses (especially to kinetic-type) to misiles. Missile damage is great especially for PvE as you don't have to worry about tracking, optimal and falloff ranges since missile always does same damage at any range. Unfortunately, it’s not that effective in small-scale pvp since missile damage can be almost completely mitigated by ships size and speed. Certain ships, like interceptors, can outrun missile even after its launch. There is a missile type for every kind of damage which makes it easy to adjust your damage output to match your enemies’ weakest resistance.

Hybrid turrets are a second type of weapon used by Caldari State ships. There are two types of hybrid turrets: railguns for long range and blasters for short range encounters. Blasters have the shortest range of all turrets but have highest potential DPS, railguns however have the longest range out of all turrets in the game but also lowest dps. Caldari ships are especially good with those turrets thank to their bonuses that mitigate some of the drawbacks of using hybrid turrets.

Unfortunately hybrid turrets are not as versatile as missiles and can only deal kinetic/thermal damage while also depleting your capacitor. Instead of damage types, hybrid ammo has a wide variety of range options. For example T2 railgun spike ammo can easily beat 100km range, which makes them a combination of choice of any Rokh sniper.

Caldari EWAR type is ECM. Its prolly highest chance-dependant and most attention consuming ewar available but is also extremely annoying to fight against target lock prevention of successful ecm burst. Unlike other ewar types, ECM is extremely inefficient on non-ewar hulls.

Bantam:
Very basic logistic frigate with bonuses to shield transfer modules. Thanks to being small its not reliant on cap-chains. It's a very good training vessel for future Osprey or Scythe pilots.

Heron:
Standard exploration frigate. Probe strength bonuses make it a great ship to start your exploration in. Can be fit as a low cost stealth ganker as well as incursion hacker.

Kestrel:
Entry level missile boat with high speed and damage but a terrible tank, hard to fit with underdeveloped skills, if you can kite properly it can be an amazing ship to do some low-cost pvp.

Merlin:
Hybrid DPS ship, one of the strongest T1 frigates available in game with good tank and strong damage.

Moa:
Hybrid turret ship with terrible DPS, usually fit as a rail-sniper. Pretty slow with good tank, some people fit it with blasters but its not really recommended since most of other cruisers can outrun moa pretty easily.

Ferox:
Hybrid Turret sniper boat that can fit ganglinks which are pretty useless since it’s a primarily a…. sniper boat. Can be fit with blasters but if you really have to do this it’s better to go for Gallente Brutix.

Naga:
The newest addition to Caldari ship roster is a Hybrid turret ship that can fit a battleship sized weapons on a battlecruiser sized hull. Almost always fit as a glass cannon sniper capable of a strong “alpha strike” from afar.

Scorpion:
Fleet ECP battleship and the only caldari ship that is very often armor tanked, not due to bonuses but rather due to slot distribution. With 8 mid slots available, Scorpion can fit massive amount of ECM modules.

Raven:
Missile boat and the best L4 mission runner in game. Has a bonus that affects all types of damage (not only kinetic) and a solid active tank.

So there you have it, a brief look at the boxiest of boxes, shieldiest of shieldy - Caldari Ships.
I hope you’ll find this guide useful, remember to keep your d-scans running and, as always, Fly Safe o7