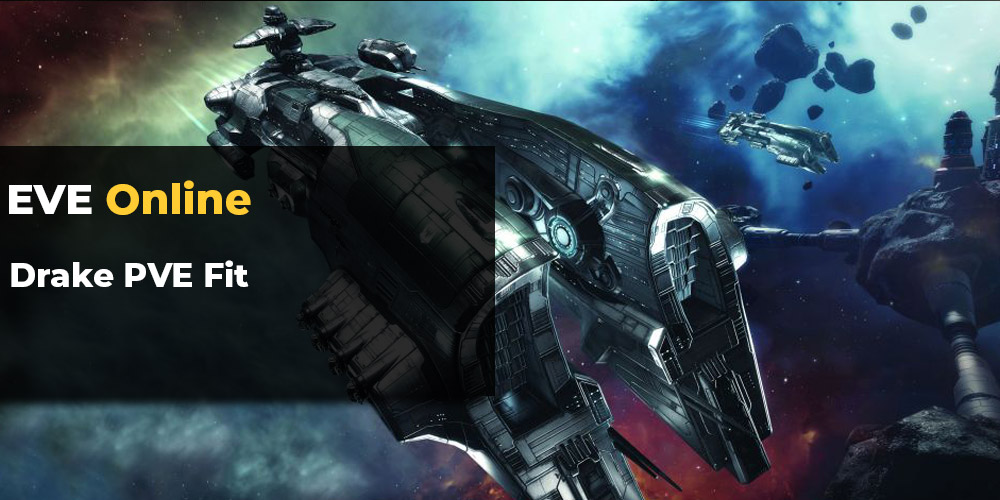 Drake is probably the most recognizable mission-running ship in EVE online. Thanks to its massive passive shield capabilities this Battlecruiser could do even Level 4 missions. Since it’s hay day Drake pilots have been bashed by a series of nerfs, first Heavy missiles had their DPS lowered significantly making them worse even than Heavy Assault Missiles. Then the hull itself got changed with reduced fitting capability, shield regeneration, and speed.

It’s quite possible no other ship in the history of EVE got nerfed so badly. Despite all this, and after few tweaks Drake still remains as the top choice for Lvl 3 mission running albeit not as meta-breaking as it was in its former glory.

Drake fitting isn’t skill point heavy and is quite easy. Thanks to the massive tank bonus it is pretty forgiving and missiles are extremely easy to use weapon system since you don’t have to worry about intricacies of angular velocity or optimal range. There are few downsides to the drake like low speed and reliability on T2 missile launchers and missiles.

The most popular, cookie-cutter fit for PVE Drake is based on Heavy Missiles and massive passive tank. You want to put 6 Heavy Missile Launchers in your high-slot, preferably Tech 2, you will still have one slot remaining for either probe launcher or salvager module. Your mid slot should consist of two Large Shield Extenders, 10mn afterburner (whichever you can fit) T2 EM Ward, Thermal Dissipation Amplifier and Adaptive Invul Field II. Obviously, you can shuffle those resistance mods to better fit rats you are fighting. You can check your current mission up on EVE-Survival to learn what type of damage you should be resisting on your current assignment.

There isn’t much room in the low slots so keep it simple, two Ballistic Control Systems and two Shield Power Relays (both preferably Tech 2) should be enough. When it comes to rigs use them to further upgrade your passive tank by fitting your rig slots with three Medium Core Defense Field Purgers. Remember to always adjust your ammo and drones to the current mission. In general Drake pilots stick to Scourge Fury Heavy Missiles (Tech 2) unless fighting against Sansha and Blood Raiders, in that case, switch to Mjolnir Heavy Missiles. Since you are passively tanked remember to keep on moving to mitigate some of the damage, usually it’s a good idea to orbit at about 30km.