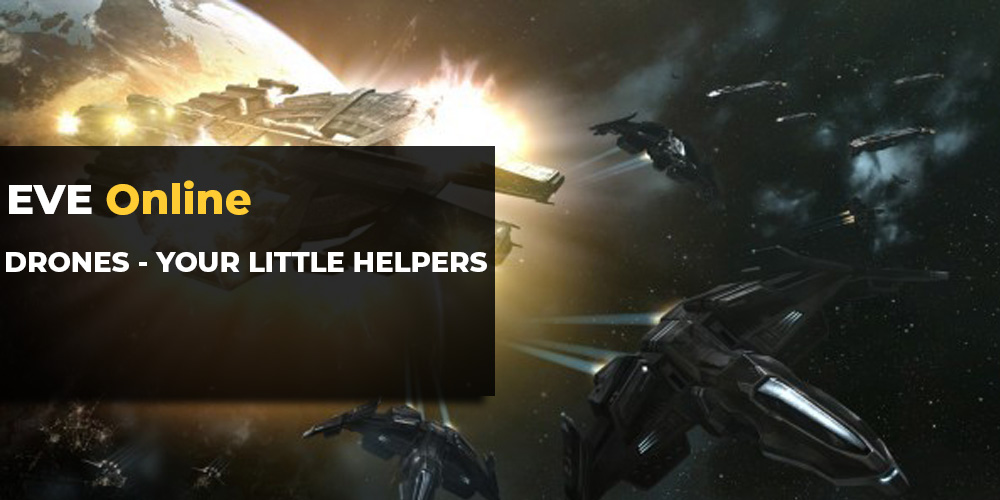 Drones are your little helpers in EvE Online. Those semi-automatic little crafts can perform a variety of tasks, from providing you with additional firepower to repairing your fleet or salvaging wrecks.

To use drones your ship has to have a drone bay, the bigger the bay the more or bigger drones you can use. You can find information about the drone bay in the attributes tab of the ships. Drone bay is a space exclusively for drones, you cannot put anything else inside.

With drones loaded in your drone bay, you will notice a new UI element which tells you what drones you have in your drone bay and which ones are currently in space. Through here you can launch your drones and command them when in space. This window will also show you how badly damaged your drones are (just like normal ships, drones have shield, armor and hull hitpoints).

Bandwidth is a ship attribute that determines your ship ability to control your little helpers which is measured in Mbit/sec. The bigger the drones are, the more bandwidth they need and you can only deploy as many drones as your ship bandwidth can handle. You will often see ships that can carry way more drones than they can actually handle in space which gives them more choice and options when it comes to drone selection. The maximum amount of drones is determined by your Drones skill. For example, if you have Drones at level V but your ships bandwidth allows you to launch only four you will have to work with four AI buddies. This works both ways, if your ships bandwidth allows you to launch more than five drones you won’t be able to (this usually means that this ship is designed with more advanced drones in mind).

Drone control range is the area from your ship that your drones can operate in. Base range is 20km but it can be increased greatly by Drone Avionics and Advanced Drone Avionics skill. You can enhance the range even more with proper modules and rigs such as Drone Link Augmentor or Drone Control Range Augmentor rig.

Electronic Warfare Drones are your mobile EWAR modules designed to tackle or incapacitate enemy ships using various electronic warfare measures. There is a drone for every type of EWAR: Tracking Disruption, Electronic Countermeasures, Sensor Dampening, and Target Painting. Additionally, you will find Energy Neutraliser drones that drain your enemy capacitor and Stasis Webifier drones that will slow your target down.

Logistics Drones - Repair bots that will fix your shield, armor, or hull depending on which drone you’ll choose.

Mining Drones - they mine asteroids (shockers!)

Drone combat has the highest skill requirement from all the types of weapons but considering their versatility and the fact that drones are often running along your main weapon skills it's worth getting into. There are also modules that can enhance the performance of your drones for each type of slot.

I hope you learned something about EvE Online drones from this brief guide. Drone combat is a very wide topic with lots of nuances, we have only covered the bare basics of it. Be sure to check our site often for more detailed guides in the future.