EVE Online Mining: everything you should know about EVE Mining 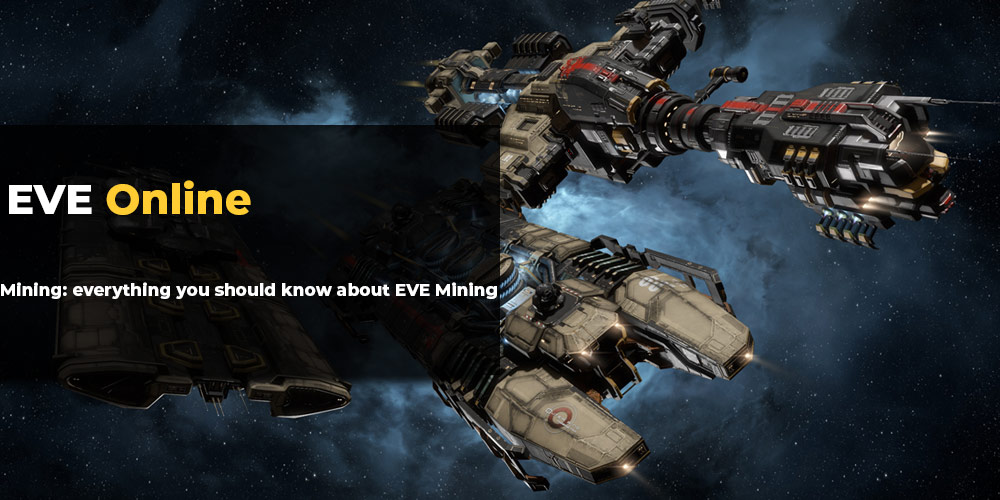 EVE Online Mining isn’t a bad choice of profession. Some may find it boring, but others are quite happy chipping away at rocks with their mining lasers and mining drones or combat drones. EVE Mining profession will provide you with a decent steady income and will let you learn the basics of the game while you make use of those mining upgrades on your local asteroid belts. There are few ways you can approach mining, from gas huffing, ice mining to moon mining and production, you can mine for corporations or do mining missions. You can mine in fleets of frigates or mine solo in one of the specialized mining barges with highly specialized modules. You can focus on raw ore harvest or you can sell refined minerals or even take up production. You can spend your days in high-sec or take a risk and mine in nullsec for maximum profit. There is room for a number of ways pilots go about their mining.

If you find yourself trying to buy a brand new pirate ship but just don’t seem to have enough ISK, there’s no problem, you can go for a slightly less pricey ship. Still over your budget? Maybe it’s time to learn how to mine and start raking in that dough. If you do EVE Mining well it can be worth much!

Although it does have its subtleties and its dangers. And of course, there are other, maybe more fun, or at least active careers for you to pursue.

How to begin mining in EVE Online?

At first, you will wake up in a newbie ship. If this is your first time playing it is a good idea to go through all those tooltips the game is providing. During your tutorial, you will also receive your first rookie ship, as well as some skill books and equipment.

The dangers can be mostly avoided if you stick to EVE mining in High-Security systems (those with a security level between 0.5 and 1.0) which are patrolled by NPC CONCORD, and where stargates and stations have sentry guns. Your only danger here will be suicide gankers, rare, but you still need to keep an eye out.

How to do EVE Online Mining safely?

The golden rule in Mining is “never undock what you can’t afford to lose”. With that being said, the entry requirements for starting mining are quite low. You can get the Venture mining frigate as a reward for a mission from the Industry Career Agent. It requires Mining Frigate I skill, which only takes 15 minutes of your time to train, apart from the skill Mining level I. Astrogeology is nice to have for an efficient miner, although it requires Mining IV and Science IV, and should be trained later.

What is the venture?

The Venture is one of the most basic mining ships in the game suitable for early solo mining, so anyone should be able to use it straight off the bat. Despite its low mining yield and inability to use mining crystals, Venture is a good step before you jump onto mining barges and exhumers. So if your mining kills are still developing and your cycling times are still long Venture is a great ship to chip those space rock for some extra income.  As soon as you can, you should get two mining lasers for blasting the asteroids and survey scanners for checking their contents. As you get into advanced mining you will gain access to strip miner, ice harvesting, Tech 2 mining frigates, you will learn about jetcan mining, gs harvesting and more.

Next, bring the ship fitting up in the Venture and strap on those two mining lasers you just bought. Don’t worry about any other modules, you don’t need them for mining.

You could just start mining as soon as you find an asteroid belt, but the recommendation would be to go to a quiet system, away from main hubs, and mine. The chances of getting ganked, one of the dangers mentioned earlier, are far smaller. Once you get your mining laser upgrade and your mining skills up you can grab that survey scanner and try ore mining in more dangerous areas.

Your mining fit will depend if you are flying without any fleet member or are you flying as a squad. In a multiplayer mining and gas harvesting operation you will often see ships that can boost your strip miners strength, enhance your shields or strengthening your warp core. In general mining in the group is way more efficient due to support units large cargo holds and mining drone operation support.

Fleet focused ships like ORCA allow for hours of mining before going full (depending on the squad line-up). With a ship like rorqual in your squad, which is way more expensive than ORCA but holds way more cargo hold and is more resistant to rats, you won't have to visit a station at all, unfortunately, effectiveness of Rorquals is limited only to null security space since they are allowed to move around only at 0.0 and lower.

Who are suicide gankers in EVE Online?

Suicide gankers are players who will destroy your mining ship even in high-security space. The reason they do it is sometimes for profit; they evaluate the value of their ship vs the potential profit from loot gained from you and if they break even or make a profit, they go for the attack.

On the other hand, some do it just for kicks. There are always those people who like to watch the world burn and won't think for a second about the penalty. All they care about is the reduction of your ship into a bunch of debris and container. Avoiding suicide gankers is difficult since they are usually not a part of a larger corporation and usually alt characters so you have to make judgments based on your experience. Gankers often target Hulks since they have large cargo holds and poor tank, they won't go for larger or tank-fitted ships.

How to increase your mining earnings?

One way to increase your earnings, once you get comfortable mining in your Venture, is through refining. So apart from selling your ore directly to the market, it is better to refine the ore and obtain minerals, which you can then sell at a higher price. For this to happen, you do need two additional skills: Reprocessing and Reprocessing Efficiency, both of which need to be at least level 5.

When you get the extra ISK, the next level of EVE mining ship is the Mining Barge. There are 3 types of ship: the Procurer, Covetor, and Retriever, each with its’ pros and cons. The Procurer has tanking ability but lacks in yield and size of the ore hold; the Retriever can be also somewhat tanked, but its’ greatest strength is the ore hold, making it a great candidate for solo EVE mining, whereas the Covetor is a very thin ship with a small ore hold but surpassing both other two ships in ore yield, making it great for fleet mining operations.

Out of all of these, I believe going with the Procurer for high-sec mining is your safest bet.

The skills needed for using a Mining Barge are Mining IV, Science IV, Astrogeology III, Mining Frigate III and Industry level V, although the industry has nothing to do with mining and it takes you a few days to train. After getting all of those and raising enough ISK, you can get the Mining Barge I skill.

The next tier of mining vessels is the Exhumers. They maximize the abilities of the barges, however, training for them is a very time-consuming activity they also have stronger CPU and power grind drastically giving those ships some room to expand their fitting.

If you do decide to become a professional miner, you’ll need Exhumer skill level I, for which you’ll need Spaceship Command IV, Astrogeology V and Mining Barges V, all in all, a few weeks of training for what could be considered not a large gain in yield, but opening the door for new and better modules to equip your ship with. Again, it depends on the mining scenario, but the Skiff would be a good choice for an Exhumer.

Other options to maximize profit

There are more ways of increasing the effectiveness of your industrials. Thanks to boosters, fleet links, the addition of mining implants you can modify cycle times, cycle duration, processing effectiveness, overall survival rate, capacitor size, and regeneration.

Once you reach the top tier form of mining - Rorqual Mining, you will also need drones skills fully developed. Rorqual operations of three or more rorquals target the best ores in null-sec. With huge cargo, upgradable bays Rorquals are at the core of every major alliance resource management.

Once you reach Rorquals you won't need to bother about the survey or combat - since your shield tank module can take quite the beating and drones can handle both mining and fighting. Remember to pick your fitting according to the situation to suffer minimal losses due to ganking. New Eden is a harsh place for industrial pilots so you might consider joining one of the beginner corporations like EVE Universit that will provide some defense and will be your safe haven in space.

EVE Mining is a great way for new players to earn some starting credits, it does not require a lot of special skills or expertise to pull off. Effective fly with a huge amount of money revenue it is a hard process. I wish that this news introduce increase your income. Check our other content for reduces capital loses and make game easier and secure. Miners are a backbone of every bigger operation, every corporation requires huge amounts of every type of rocks out there so anyone who does play a miner is an asset to a corporation.

It allows you to pursue other activities besides the game, although being AFK is not recommended while mining, as you never know when the next encounter will take place. You don't want your account damaged.

There is always a danger of running into other players, which hunt miners on purpose, even in high sec space.