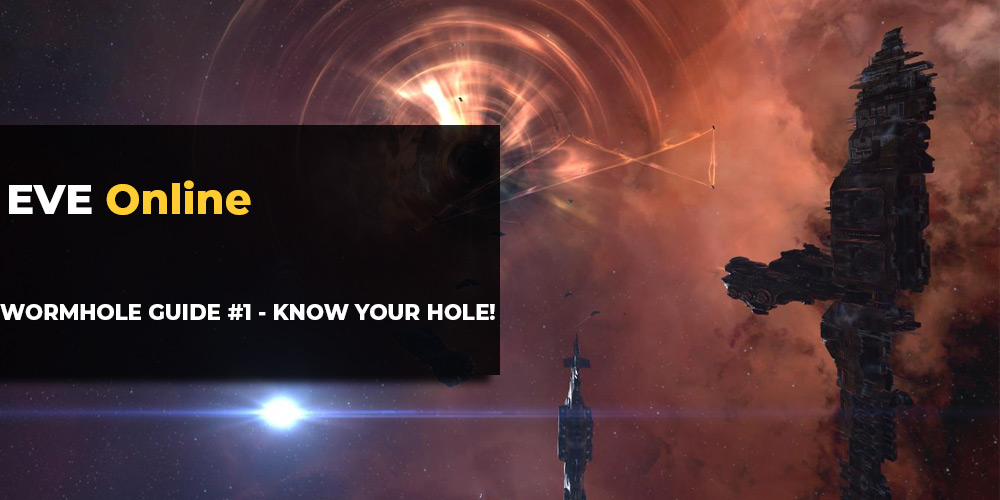 Wormhole space, the Wild West of EvE Online where pilots of all kinds seek their fortune. Away from hi-sec, sovereignty and with local chat disabled you can never be too sure what danger lurks around the corner. Exploring those forgotten corners of the galaxy may be a source of great fortune for those lucky enough to survive, today we'll take a closer look at the Wormholes to give you a basic idea of what they are, what to expect and how to survive.

Wormholes can be found all around the EvE universe and appear as cosmic signatures that need to be scanned down. Once you have pinned down its location you will see a portal-like object floating in front of you, this is the wormhole. Those "portals" can lead to anywhere from empire-mapped space also known as Known Space or
K-Space to W-Space (wormhole space) in various combinations - high sec to high sec, high to null, null to a wormhole, null to low etc. etc.

When you will first see the wormhole it won't straight up tell you what kind of wormhole it is there are few ways to identify the wormhole. You can read the description that will give you a basic idea of its destination, if you are experienced enough you could identify them visually (different wormhole types have different colors) or you could just look their code up in the table at the end of the article.

Even if you use the table method it is still a good idea to read the wormhole description as it can give a few hints about its stability and ship capacity. There are certain keywords that can tell you a lot about that specific wormhole.

The first sentence talks about a type of the wormhole and it will follow a certain format:

This wormhole seems to lead into [keyword] parts of space.

Depending on what the keyword is used you can guess what's on the other side:

The next sentence will tell you how much longer the wormhole has before it collapses. You can find one of the following sentences here:

The third sentence will tell you how much mass has passed through the wormhole already. This is very important knowledge for fleet operations as each wormhole has a certain mass capacity and collapses after it is reached, reading the information properly can give you a hint about enemy movements in the area, how big of a fleet can you squeeze through or what will it take to force-collapse the wormhole.

Wormholes are divided into six different classes, each one defines the difficulty level and ship class allowed with C1 being the easiest and C6 being the hardest. Let's do a brief summary of each class.

Combat sites in this wormhole class are pretty easy and are perfectly doable in most cap-injector tactical destroyers, battlecruisers such as myrmidon are pretty much overtanked for those sites. Each site is worth about 60 million ISK and more depending on the loot from salvage. There are two kinds of data and relic sites - standard nullsec sites which are basically hack-and-loot type of sites such as Sparkling Transmitter or Ruined Monument and there are also heavily guarded Sleeper Cache Sites with guards slightly stronger than other pirates in the system and can be additionally hacked after you defeat them but they do not yield any worthwhile loot unless its a Ruined Talocan. Statics (wormholes that are constantly spawned in W-Space) will always lead to K-Space. Only battlecruisers and smaller ships can enter with exception of Nestor -

+. You can, however, build bigger ships inside the W-Space, they won't be able to leave it though.

Combat sites are not really worth it, eHP required for them is relatively high compared to C1 and if you can tank it you can probably go straight for C3 sites since the difference in damage isn't that big. They are doable in overtanked battlecruiser but you might just skip it and go one class higher. Scannable sites are pretty much the same as in C1. When it come to gas harvesting there is a very small chance of getting a really good one. As it comes to statics there are always two - one going into K-Space and one going into W-Space and they always come in pairs - if there is one static into Hisec the other one will be C1/C2/C3, if there is a Lowsec static the other one will lead to C2 and Nullsec static will lead to C5 or C6.

One of the most popular wormhole classes. Combat sites are pretty easy for the ship class allowed and you can easily get 200-300 million ISK per hour doing them. Averagely fitted Rattlesnake, cap-injected Stratios or Tengu can easily run those. When it comes to data and relic sites you can be pointed (warp disrupted) by the pirates so you better be ready to face them head-on. Gas sites are pretty decent as more C32 starts to spawn more often. There is only one static leading to K-Space. Battleships are the largest ship class allowed to enter.

Similar case as with C2. You really need to have a very expensive ship to successfully do those sites solo, we're talking officer and faction modules which are worth lots of money and return on those sites is not really worth it. It is more efficient to do them in active-armor linked teams of two, but when it comes to solo play it's not really worth the effort. Each combat sites is about 80 million on average but you could just run relic and data sites and get about 90 on average. Just as in C3 those sites can point you so once you're in you have to be ready for a fight (unless you have a micro-jump drive). There are two statics in C4 and both lead to W-Space. Ship size is still battleship or smaller.

Combat sites in this wormhole are probably the best sites to run duo when it comes to ISK per hour. Each site is worth somewhere between 500 to 600 million ISK. If you can run a team of two dreadnoughts you should be able to do those sites in about 15 minutes which translates to huge income per hour. However, if you want to run those sites solo, an officer fit marauder (especially Paladin) is probably the only ship that can handle them with an ease. The only problem when doing them solo are the escalations that can spawn three elite battleships with insane eHP and DPS.

The next thing to know that at the end of the site a Decloaked Transmission Relay structure will spawn and when hit it will summon Arithmos Tyrannos which is a drifter response battleship with eHP similar to the entire site altogether. If you will escape Arithmos, that beast will warp around the system for three days before it despawns. When it comes to scanning, just like in C4, there are no NPC pirate faction relic and data sites, just sleeper caches that can escalate as well if you bring in a capital ship to the site. Static in this system will lead to another C5 or C6 space but it allows to push through capital ships.

Combat sites are probably not soloable and are highly contested, it is rumored that Russian alliances hold those systems with an iron grip so it's very dangerous for anyone outside their "blue list". Scannable signatures are at this point hardly worth it since they are even harder than combat sites and escalations can bring some heavy neutralizers that can make it hard even for a team of two dreadnaughts. There is only one static that goes to a random class W-Space.

So now you know how to find and identify your wormholes. In the next chapter, we will go more in-depth on surviving in this extremely hostile environment and make some profit. Until next time, fly safe!