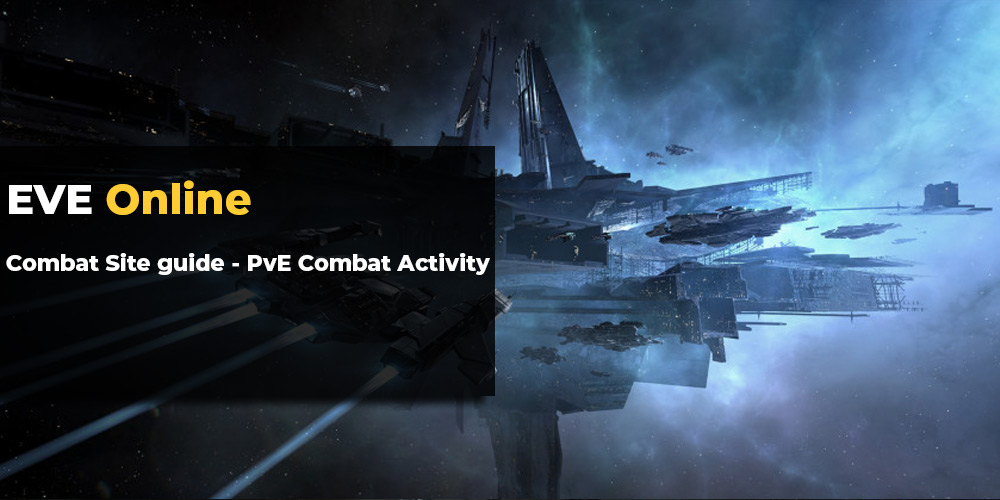 Combat Sites are one of two most well known PvE combat activities to perform in “Known space” or “Imperial Space”, other being security missions. Combat Sites can be found all over New Eden and just like missions you get from the Security Agents, the type, number and variety of enemy ships found in a specific combat site is always the same for that particular site, with very small random factor (also called “escalations” but we will talk about it later). The rewards for doing such sites vary depending on the “officer spawn” (the random element) and DED rating (how hard it is). Most sites have some percentage of chance to spawn an “officer”, ship with a unique name that is harder to kill, deals more damage but also has a chance of dropping a random Deadspace or Faction module, often unique blueprint copies with multiple runs.

Combat sites will be named after the faction occupying it. Unlike the security missions, combat sites do not feature any hostiles from the four empires (Amarr, Caldari, Gallente, Minmatar) neither those sites will be guarded by any of the friendly NPC factions like ORE or the Sisters of EvE. One exception is Mordu’s Legion (neutral faction) appearing in the Besieged Covert Research Facility. All enemy ships found in the site will have bounties on them and are paid to the player or fleet that kills them, in case of a fleet bounty is divided equally among the players. Bigger the ship, or more advanced the ship, higher the bounty.

Combat sites can be found by exploration using Core Scanner Probes or, in case of anomalies, using onboard ship scanners. There are two different categories of sites you will find oun your radar combat anomalies visible to everyone and combat signatures that have to be scanned down by probes (dividing further into DED rated complexes, unrated complexes and chem labs). In short Cosmic Signatures are considered to be more dangerous and also more rewarding.

Expedition and COSMOS sites are unique combat sites that do not belong in any of the previous categories. Expeditions are long chains of connected combat sites that may be triggered when a player completes very specific requirements in an Unrated Complex, and those sites can be reached only via the Agency panel. COSMOS sites are found in few regions of New Eden and are marked with special beacons that by default show up in the overview. Those sites reward special items for COSMOS missions such as materials for Storyline modules etc., you don’t need to be on a quest to enter but the granted items are useless without the mission.

Doing a combat sites is simply done by entering and clearing the site of any hostile NPC ships. Completing these sites is easier with ships fit with PVE specific modules to reflect resistances and damage types of the pirate faction found inside.

Combat anomalies do not need any scanning equipment to be found, they will automatically appear in the scanning window upon entering a system. Because of this fact, high security space anomalies are considered “newbie sites”. Anomalies are just a single “room” or “pocket” without any acceleration gates leading further and can be entered by any type of ship. Upon entering, waves of hostile NPC’s will throw themselves at you with a low chance of a commander ship spawn and even smaller chance of escalating into DED rated complex.

All anomalies (except rogue drone ones) follow specific model of naming them: . Faction will tell you who occupies the site and will tell you the difficulty of the site. Each faction will have their anomalies spawn only in the region of their appearance (with the exception of Rogue Drones that can appear anywhere), so for example, Metropolis region which is the center of Minmatar Republic will have mostly Angel Cartel (and drone) anomalies. The possible difficulty spread of combat anomalies depends on the system security status, higher the status lower the difficulty. 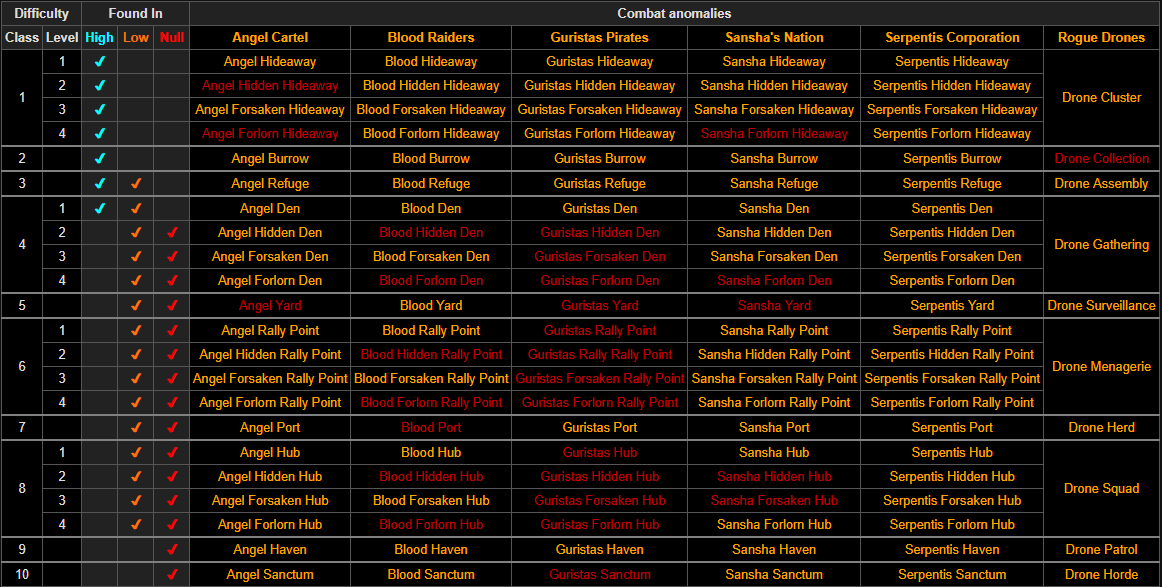 There are two unique anomalies you should be aware of. Besieged Covert Research Facility is found in all low sec region and spawns two waves of Mordu’s Legion cruisers and battleships. Unlike other encounters those ships are able to switch damage types to find your weakness. Also in a Faction Warfare, warfare complexes are marked as anomalies and once someone warps into such site it will spawn a beacon visible in the default overview.

Combat sites  spawning as cosmic signatures have to be scanned down using Core Scanner Probes and will require some skanning skill to pin them down. The harder the site the harder it is to scan it to 100%. Those combat sites can be divided into three categories: DED rated complexes, unrated complexes and chemical labs. Differences in threat however are pretty minor with exception of Chem Labs requiring data analyzers to get the best rewards.

Unrated complexes have a big chance of containing commander ship spawn and, after completing various requirements, will escalate into an expedition. Those sites will consist of various rooms connected to one another by network of acceleration gates. Gates from one room to another are usually locked until some condition is met or key is found. Those combat sites also have “trigger ship” that will spawn additional defenders. Size ship limitations in unrated complexes have no set formula, each site allows for a different ship to enter.

DED rated complexes are rated by CONCORD in scale 1-10 with 1 being easiest and 10 being hardest. DED rated complexes have a limited ship class access and, just like unrated complexes, are found with Core Scanner Probes. The rated sites are very similar to their unrated counterparts in their composition and will consist of few rooms connected via acceleration gates and will contain pack of mobs. Unlike other sites however, rated complexes will have no extra triggers and each room will begin with every possible enemy already spawned but, instead of defender triggers, they can have a “gate trigger”, a ship that unlocks the gate when destroyed, making it possible to blitz through all the rooms if you know what to look out for. Rated DED complexes do not escalate unless they are received as an escalation from an unrated site, in that case you may receive another escalation or a second part of it.

The difficulty rating of a complex displays the difficulty and also determines the maximum ship size allowed to enter. After recent changes, T3 cruisers are no longer allowed in 3/10 and 4/10 DED complexes.

You can tell the DED class of the site by checking the table below:

Chemical Labs are cosmic signatures that also can be found using scanner probes but will be initially categorized as “gas sites” only scanning them further will show that they are actually a combat site. To get to the all possible rewards you will need to use Data Analyzer module to hack in the certain containers. You will also have to take the hostiles down unless you plan to tank them while hacking. The Production Facility and Digital Sites (Matrix, Network, Complex, Plexus, Convolution, Circuitry, Compound, Tessellation) can be found in null (from 0.0 security to -1.0) space only and all others will only spawn in low security space. There are not many details of these sites since they are not very popular. Most of them contain two waves of enemies and containers that need to be hacked. 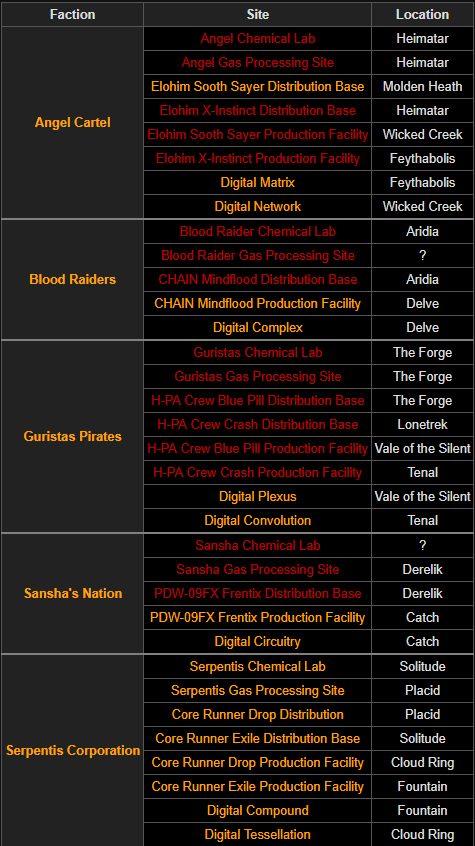 Expedition, also known as escalations, cannot be found by scanning. They are a random continuation of an unrated complex and can be triggered by meeting certain conditions or there is around 5% chance of a window showing up leading to an escalation, when this happens escalation will show up in your Agency window, and also your Journal. When an escalation is completed there is a small chance that it will escalate even further, most expeditions have usually four sites in chain.

Locations of those escalations are random but usually within several jumps of where they were obtained, most expeditions tend to spawn their escalation in the closest low security system.

One of the most popular ships for running DED rated sites is a Caldari Tengu. This versatile missile-boat can run every 6/10 site with ease when fit properly. For example if you are making a tengu for Sansha DED site you will make such fit:

For higher tiers like 9/10 or 10/10 you might want to use Pith X-Type EM Ward Fields, Anti-Thermal Screen Reinforcer II and Pithum A-Type Medium Shield Booster rest remains pretty much the same. Be sure to have at least IVth mastery level when flying a Tengu to get the most out of that ship. Pithum modules can be expensive but you can find people selling cheap eve online ISK on our site. You can also buy eve online accounts ready to fly such a ship or buy skill injectors, eve skill injectors to boost pilot you have to tengu flying capacities. If this tengu fit, eve tengu fit, tengu pve fit is too expensive for you save up some eve isk or buy eve isk before you assemble such a beast. Old saying in EvE says: don’t fly anything you can’t afford to lose. Remember to always insure your ship so you will at least get some eve isk to wipe your tears with. Fly Safe o7

*The tables were taken from EVE University wiki page: https://wiki.eveuniversity.org