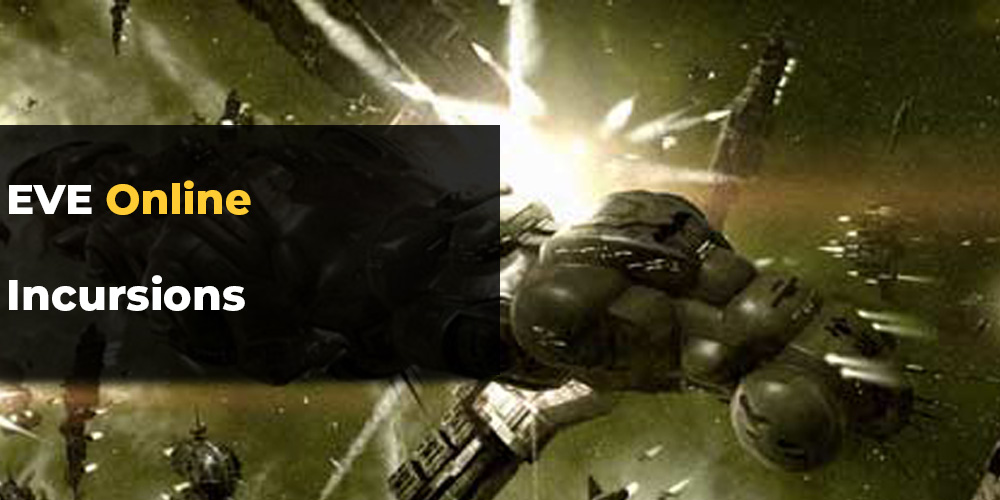 Incursions are one of the few PvE activities that are actually fun in EvE Online. To make it even better, Incursions can become a source of a steady profit if done right. Here is our short beginners guide for those that want to shoot their guns at Sansha Nation and earn some ISK while doing so.

1. What are Incursions in EVE?

6. Number of Incursions and respawns

Incursions are special events introduced with the Incursion expansion. In those events, players fight the new NPC the zealous Sansha Nation, led by elusive Sansha Kuvakei, that uses his followers to invade space in an order to conquer it for their faction. Pilots must fight off Sansha's forces in order to bring back the contested systems back into a place of order.

Incursions are high-end PvE fleet content, above that of regular level four missions and have more in common with level five missions than anything else. The introduction of incursions to the game added some much needed incentive for fleet content in highsec. It also gave people a very controlled environment to train up their skills as a logistics pilot as well as giving people a feel for organized fleets outside of general PvP.

Contrary to missions, incursion fleets rely on buffers and resists supported by logistics ships in order to survive. The ships you face in incursions use electronic warfare, capacitor warfare as well as playing on speed and signature to their advantage. This forces incursion fleets to find ways around that in order to be successful.

Due to the restrictions to fleet size, each member of the fleet matters. You cannot compensate for lack of skill or efficiency by simply adding more ships. As such, incursions are not for the brand new player, but more geared towards those who've spent at least a few months in the game able to fly battleships, logistics or more advanced ships.

Incursions are nomadic by nature with a single focus lasting anywhere from a day up to over a week, forcing the incursion community to constantly move in order to continue taking part of the content.

Since joining the same corporation or alliance would leave you wide open for war declarations, incursion runners remain in their corporations and alliances and instead affiliate themselves with various communities. Most communities operate in the same way: They have a public channel that anyone can join with all the information a pilot might need being available in their channel's message of the day. Fits are usually available through mailing lists or some other way that is readily available.

The following quote is from the EVE Chronicle Uplifted:

When it had secured the entire lower orbital altitude, the armada held position until a second wave of ships emerged from the wormhole. These new vessels were different, though, lacking the bulky warp drives that took up so much space in the combat vessels; instead, their cavernous cargo holds had a very specific purpose, housing rows and rows, layer upon layer of holding cells designed to store humanoid “passengers”. The ships dropped through the atmosphere unimpeded, by squadrons, a perfectly orchestrated meteor shower.

This incursion information shows in all systems, letting you know there is an incursion going on. It also shows what kind of system it is, the current influence and if the mothership has been sighted yet.

When a constellation comes under the siege from Sansha's forces, the sirens sound in your Captain's Quarters to warn you; the nebulae gets a brownish hue making it obvious that something is different; beacons will appear in your overview; rats are replaced, and you suffer system wide penalties, which all make it harder to continue your usual business in not just the system but the entire constellation.

The image to the right is an example of what the information panel might look like. The panel will have different names pending on the style of incursion system. In addition to "Sansha Vanguard", there are also "Sansha Staging" and "Sansha Headquarters". Clicking on the "Incursion Profile" part takes you to the Journal and Loyalty Point Log.

Once the Sansha forces withdraw from the constellation or the mothership site is finished, the incursion is over; the information panel will then disappear, and things immediately go back to normal.

During an incursion there are constellation wide penalties. The strength of the tank and weapon penalties are tied to both the level of activity and how much influence Sansha's forces have in the constellation. As players run sites, the Sansha's influence drops, and along with it, the penalties until they are effectively cancelled at zero influence.

These penalties apply to everyone within an Incursion Constellation regardless of whether or not they are actively resisting Sansha's Nation.

Whenever a constellation is under an incursion, the normal belt rats as well as the rats that spawn in ice belts will be replaced by Sansha Incursion rats. These NPCs will be much stronger, tougher, more deadly than your run of the mill Sansha Mission rats and mining ships; weaker combat ships will stand no chance against them. The rats that spawn in ice belts tend to be larger cruiser- or even battlecruiser-sized ships.

All the mission rats and exploration site rats will remain the same, but if you linger in a completed site or a cleared out pocket, eventually regular rats will spawn every once in a while, and they will be replaced by the Sansha Incursion rats.

Due to the native spawns being replaced and the constellation penalties added, certain activities are discouraged. For example, it's very inefficient to do missions because your income from bounties is cut in half. Mining is also not advised due to the native rats being replaced by much stronger Sansha Incursion rats, not to mention all static belts are turned into Nation Industrial Proxy scout-sites. Exploration, however, can often be done without much trouble. Just don't linger too long in a finished site as Sansha will eventually spawn there too (see above).

In low and null security space, the constellations under incursion will have Sansha "gate camps" for lack of a better word. There will be groups of Sansha Incursion rats at gates in these systems, catching people unaware of the danger they pose. It is easy to mistake these for normal rats and under-estimate how hard they are to kill, and most importantly, how much of a punch they pack. See the anatomy page for a list of warp disruptor capable incursion rats or the Sansha's Manual for more information about all of them.

Please keep in mind that Sansha rats are much tougher than normal rats and may prove difficult for lone ships or poorly equipped fleets to handle, it is advised to avoid Incursion systems in low and null security space when possible to avoid unnecessary losses.

While it is impossible to predict exactly where a new spawn may occur, or exactly how long it'll last, there are several aspects of their spawn mechanics that are systematic and easy to predict.

Number of Incursions and respawns

There can be up to seven incursions up at any given time, three in highsec and four in low- and nullsec. The incursions will all spawn new incursions in the same type of security space as the one they are replacing. This means that whenever a highsec incursion is despawned, either by Sansha withdrawing or when someone finishes the mothership site, a new highsec incursion will soon spawn in its place.

The delay between an incursion ending and a new one spawning is 12 - 36 hours according to CCP, but there has been respawns recorded to have been delayed for far longer than 36 hours.

While the incursions will spawn in a random constellation, the systems of a given constellation will always have the same type of sites. There is only one requirement for a constellation to be a potential incursions constellation - it must have at least 6 systems with the same security status (high, low, null). You've got to take into account, that some systems are also taken out of the "incursion rotation", such as major trade hubs and starter systems.