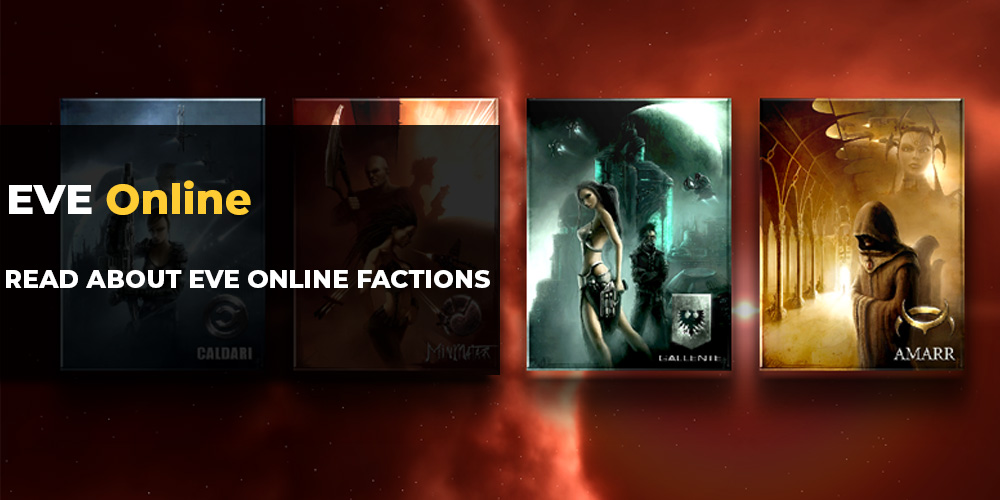 So, you have finally decided to get into EvE, you download the client, log to the game and you now have to make a choice - which race do I want to play as? Recently all racial restrictions have been removed so race pick is more of a lore and roleplay thing than it is a practical choice. EVE Online Race will also determine your starting ships and weapon of choice. The differences between each races’ ships are pretty simple, Amarr Empire use lasers on armor tanked ships, Caldari use missile launchers on shield tanked ships, Minmatar use projectile turrets on Armor tanked ships and Gallente use drones and hybrid turrets on shield tank vessels.

Those are the initial differences, nothing in EvE currently stops you from being a Minmatar pilot flying a Gallente ship. Gathering ISK to buy PLEX is also pretty much universal. So how do you know which EVE Online faction to choose? Well, maybe some lore will help you out? There are five EVE Online races in New Eden: Amarr, Caldari, Gallente, Minmatar and Jove (unplayable), each with their own backstory and factions, knowing the past of your choice give you that extra immersion you need to stick around.

Those space fanatics are the largest empire in New Eden controlling 40% of the inhabited solar system. The Amarr empress leads this authoritarian church state. Next in chain of command are Five Heirs, leaders of five royal families. The Emperor has unquestionable and absolute authority and is expected to live at least 500 years thanks to vast cyber implantation.

Amarr are deeply religious ever since they have recovered after the collapse of EvE Wormhole. This devotion and absolute obedience to the cause helped them conquer neighbouring nations. Nothing could stop the rise of Amarrian Empire, once they defeated a nation it has been immediately enslaved, and till this day slavery is part of Amarr economy and society.

Amarr were the first to re-discover technology behind warp travel and jump gates which gave them head start in the galactic race. The empire grew fast conquering two human EVE Online races in the process.

Recently The Golden Armada has encountered an opposition, Gallente Federation. Federation is way smaller than the empire but their ships are more advanced and economical strength far superior to this of Amarr, this was the first encounter on the Amarr way to domination that resulted in a stalemate.

When technologically superior Jovians appeared in New Eden, The Empire experienced first humiliating defeats in their modern history. The news of their failings encouraged Minmatar, a nation enslaved centuries ago, to rise up and rebel.

Players can choose from one of three major families of The Empire.

Amarr are proud and superstitious people, devoted towards preserving their tradition and ancestry, feared by other families and often viewed as arrogant and tyrannical by nature.

Khanid used to be part of Amarr family until a political feud led to their independence. They are the progressively thinking branch of The Empire, bringing in the innovation in both culture and technology.

Ni-Kunni were once one of the many enslaved races of New Eden but due to their unique talent in trade, craftsmanship and arts they quickly blended in the society, now after centuries of peaceful coexisted they are viewed as a vital members of Amarr society

Caldaris do not form a nation in the traditional meaning of the word, instead its a loose alliance of few mega-corporations. Each corporation is further divided into thousands smaller companies ranging from industrialists to lawyers. Every piece of land or real estate is owned by some company and is leased to its citizens.

Altho State might be viewed as tyrannical and “nazi” it's simply fueled by economy of “mutual benefits”. Thanks to their strong economy and massive modern military Caldari now stands as independent nation. Due to the nature of the company-run state its very hard to establish genuine political ties with it.

As a society Caldarians have deeply militaristic roots. Their history is a constant struggle against the onslaught of the stronger Gallente, which once even led to the loss of their homeworld - Caldari Prime.

Losing their home planet made many question their leadership and it was at this time that the corporations emerged as the driving force behind overhauling and creating the new Caldari State.

Caldari State has not engaged in full-out war in decades but they still remember atrocities of the past, which makes them dedicate vast resources to constantly improve and develop their military strength. Currently their military has no match in New Eden, maybe except for the enigmatic Jovians.

Caldari provides its citizens of both best, and worst faces of unshackled capitalism. As long as you do your job and uphold the laws you will live a decent life, but for those that cannot abide by the strict militaristic regime life can become hell very fast.

Civre are born leaders. Regarded for their wits and political prowess are responsible for upholding the integrity and unity within the state.

Achura have been a part of Caldari State for over three hundred years but their culture is still covered with a shroud of mystery. Often made fun of for being exceedingly spiritual, Achura are also capable of great innovation and pushing boundaries forever further.

Civire are the fist of the State. Unrelenting in trade as they are in combat. Extremely competitive by nature often take position as heads of trade houses or military. They are masters of focused aggression.

Gallenteans are the obnoxious, self-righteous, meddling liberals from the internet, but with way more firepower and powerful fleet. Many humans of New Eden view world governed by Gallente as Promised Land. Descendants of Tau-Ceti, which were French colonists before the collapse of Eve Wormhole, Gallenteans strongly believe in human rights, free speech and justice.

On the surface Gallente society seems to consist of wealthy and extravagant but underneath the exposed surface are billions dying from starvation and living in poverty. Liberal market-driven economy and individual freedom makes it possible for everyone to make it to the top, but also makes it extremely easy to keep the others down.

The Caldari were initially part of the Federation but deep political and cultural differences forced Caldari to secede and form their own empire. For a time the two EVE Online factions were at war with each other but eventually pease was brokered.

Federation was founded over 300 years ago and at that time it consisted of 17 sectors and four EVE Online races. The numbers of sectors increased over time and currently there are 62 sectors governed by Gallente Federation.

Legislative Arm or The Federal Senate which consists of 881 members elected every 5 years. The Senate is responsible for creating and passing new laws.

Executive Arm or The President. Elected every 5 years with no rights to re-election.

Judical Arm or courts, responsible for upholding the Federation Laws

Minmatar are a collection of various tribes that broke the chains of Amarr slavery. Defiant, independent people with strong belief in personal responsibility. Despite this, clan and family are the fabric of the Minmatar society as citizens of the Republic identify themselves by the clan or tribe they belong to. Most clans are highly specialized formations, from agriculture to space travel.

In the distant past the clans were at constant war against each other, but centuries of slavery showed them the value of cooperation. Despite minmatar being internally divided into various clans they still act as one when facing other races of New Eden.

The history of Minmatar is one of constant ups and downs, once they had a most advanced empire of New Eden with technological prowess never seen before. After few civil wars their empire crumbled and made it easy for Amarr to conquer and enslave them.

Minmatar are the most populated of all races in the world of EvE, while the Minmatar Republic is the official name of that state only a quarter of all Minmatar are part of it. Most of the Minmatar are still slaves toiling away for their Amarr masters. A significant portion of Minmatar reside within Gallente Federation creating a powerful political lobby within the senate which keeps the relations between Gallenteans and the Amarrians in a constant state of tension.

There are three major tribes within the Republic.

Brutor are the most savage and tribal of all the tribes. Known to lead a heavily regimented disciplined lives they strive for perfection on the fields of battle. Excellent combat pilots and military leaders.

Sebiestor their natural fondness for engineering and tinkering makes them highly regarded tribe in the Republic. They can make anything fly and adapt almost any ship to the needs of the newly created nation.

Vherokior originally desert nomads of Matar (Minmatar homeworld). Even through years of slavery they have still retained their aptitude towards trade and diplomacy.

These are the four EVE Online races called also EVE Online factions. Have you made your pick?