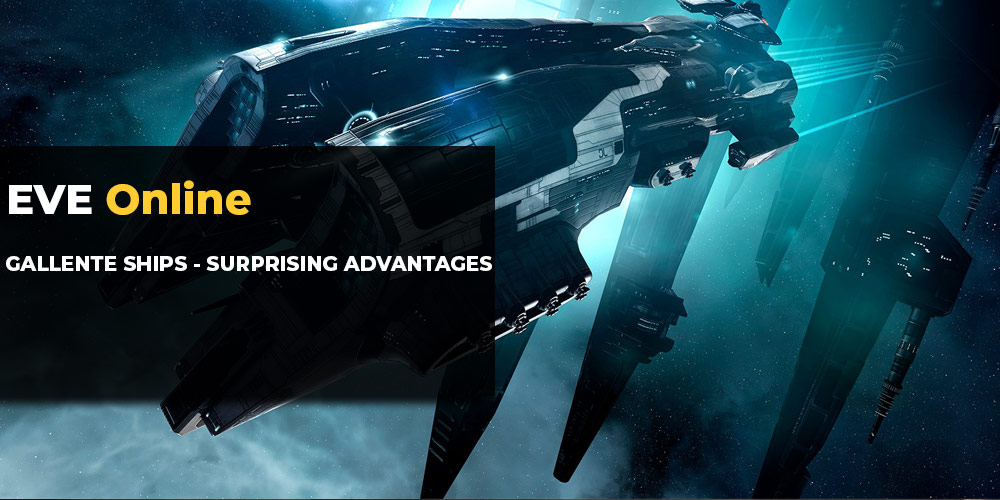 Liberal Gallente Federation show their approach to social policies even in their ship design. Gallente ships are one of the most versatile hulls out there. Visually Gallente ships are curvy, smooth and asymmetrical in shape, some call them “squid ships” or “sushi fleet”. Federation ship hulls usually have bonuses to hybrid turrets, active tanking and drones with only two ships in their roster having bonuses to missiles: Lachesis and Nemesis.

Thanks to abundance of low slots, Gallente ships can load lots of hull upgrades like nano-structures, inertia modifiers making those vessels one of the most agile in New Eden. A competent Gallente pilot should focus on skilling drones and hybrid turrets before anything else.

Gallente ships have highest damage potential in game as blaster (short range hybrid weapon) have the biggest DPS in game (and shortest range). Many Federation ships can be fit with any kind of tank and thanks to their huge drone bays and drone bonuses Gallente ships can have few set of drones ready for deployment (few ships can hold ewar, combat and tackle drone squads in their drone bay at the same time). Thanks to the active repair bonuses and slot layout, Gallente ships are one of the best vehicles for small-scale solo-gank PVP.

A number of Gallente ships have unique bonuses to Sensor Dampeners and Warp Disruptors making them one of the stronger e-war and tackle ships since they can pin down their opponents from further away.

It’s quite hard to narrow down Gallente general weakness since they are so versatile but I guess “jacks of all trades, masters of none” best describe Gallentean fleet. Of course this will differ from ship to ship but in general reliance on drones makes Federation capsuleers both very strong and very fragile, depending on the matchup. As is the case with any other race, you have to play to your ships strengths and your opponents weaknesses. As you become more and more experienced in EvE you will learn not to fight Minmatar ships without patching your explosive resistances or not to kite frigs with blaster-fit Enyo. Gallente, more than any other race, is all about adaptation.

Below you will find a brief description of all Gallente Tech 1 combat ships starting with Frigates, we will be skipping a rookie ship: Velator.

Atron:
Atron is your first fast tackle training frigate. Designed for speed, with base speed of 420 mps Atron is one of the fasted Tech 1 frigates in New Eden, with some afterburners or mwd you can easily reach a sub-interceptor speeds.

Imcus:
Imcus is a great training vessel for exploration. With basic exploration frig bonuses it doesn’t really stand out as an exploration frigate. Massive drone bay (for a frigate) makes it possible to carry around eight small sized drones and have four in field, which means you can always carry a set of combat and a set of ewar/tackle drones to get out of tight situations.

Incursus:
Incursus is a good all-around gunboat. Very effective at Level 1 mission running and small low-cost pvp. Many new pilots will find it problematic to fit Incursus to the full due to low CPU. Thanks to three mid slots and four low slots Incursus makes for a very good tackler with a passable active tank.

Maulus:
Your first ewar dedicated frigate. Pretty low maintenance and easy to use. Gallente electronic warfare modules of choice are sensor dampeners and hindering enemy lock speed and range. A valuable, although fragile, addition to any small pvp gang fleet. Budget choice but it does it’s job well.

Tristan:
“Fat Boy” is a strong PvP/PvE choice. Three low medium and high slots with a strong capacitor and proper bonuses to both turret and drone damage make it this little guy capable of dishing out some serious pain. Although Tristan is pretty capable in both PVP and PVE it’s pretty slow so you will rely on your drones more than on your blasters.

Catalyst:
A typical destroyer gunboat, if you have ever been suicide ganked by destroyer it most likely was a Catalyst. Fitted with 8 blasters has an extremely powerful alpha strike potential for a ridiculously low cost. Does extremely well as a ship of choice for Level 1 missions and as a salvager for level 3 missions.

Algos:
Where Catalyst is an amazing gunboat, Algos is amazing drone boat. While having weaker punch than a Catalyst, drones can keep a more reliable DPS on longer distances and thanks to a large drone bay, Algos can fit squads of ewar and tackle drones that will help capsuleers get out of sticky situations.

Celestis:
A bigger Maulus. Celestis is a typical e-war cruiser and like Maulus it gets special bonuses to remote sensor dampeners. Thanks to five medium slots Celestis can fit quite a few making it a great addition to any fleet. Unlike any other gallente ship, Celestis can fit up to three turrets or missile launchers which opens up quite a few offensive options for this ship, allowing pilots to defend themselves during a hectic combat.

Vexor:
Amazing drone boat. Huge drone bay, solid bonuses to drone durability and damage and four slots for turrets makes this ship a solid Level 2 mission runner, but to make use of the bonuses it's good to have drone skills trained to a reasonable levels.

Thorax:
Hybrid turret powerhouse and a solid PVE pick. It's pretty agile so fitted with a MWD it can close range on its target pretty quickly and tear enemies with a solid blaster salvo. Thanks to abundant low slots Thorax can be fitted with some nano modules increasing it’s overall agility and speed.

Here is a quick recap of basic Gallente ships. I hope you’ll find this guide useful, remember to have a d-scan running and fly safe o7.