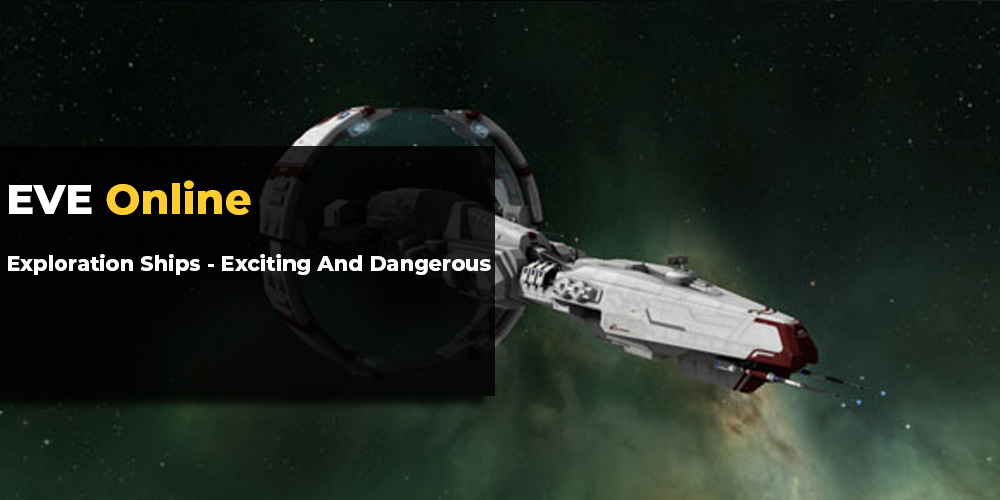 Exploration has become one of many viable ways of earning your upkeep in EVE Online. Looking for hidden sites and treasures stashed within can be both exciting and dangerous. For many, exploration has become the main activity in New Eden. There are many EVE Online Exploration ships design to aid explorers in their ventures and we can generally divide them into five “types”: T1 Faction Frigates, T2 Faction Frigates, Sisters of EVE Online ships, Strategic Cruisers and “miscellaneous”. We will briefly go through each type.

Each imperial faction of EVE Online has a frigate designed for space exploration. Caldari use Heron, Gallente have Imicus, Amaar pilots fly in Magnate and Minmatar in Probe. Those T1 hulls are pretty easy to get into and do not require lots of skills but are also not meant for exploration outside high-sec space. Those entry-level exploration vessels are cheap, can fit expanded probe launchers and have massive cargo holds. Sometimes they can be used in a space because you can make their worth back couple times over from a single site. Unfortunately, T1 hulls have some major limitations, those frigates have maximum scan strength of 37.5% (at the racial frigate skill of V) which makes scanning way more annoying (and some sites will be literally impossible to scan down), weak virus strength can also be fairly annoying for harder “red” cans. Still, they are the best ship to learn the ropes of space exploration, thanks to their low price and disposability it’s a pretty mistake-forgiving class of ships. If you want to take your chances at low-security space just haul dozen of those ships into a low-security system and fling yourself at data/relic sites if you get lucky you will be able to pay off your entire fleet with loot from a single can.

T2 Faction Frigates are simply Tech 2 versions of the Tech 1 exploration frigates. So Heron turns into Buzzard, Imicus transforms into Helios, Magnate into Anathema and Probe into Cheetah. This class of ships is called Cover Ops and is designed for more advanced space exploration. If you have trained on T1 counterpart you will feel right at home when jumping into one of those babies with one major difference: stealth. Covert Ops is also a good option for Stealth Bomber pilots since it basically requires exactly same skills.

Covert Ops are the most efficient space explorers when it comes to cost-effectiveness count but also have one of the highest skill ceilings. Maximum scan bonus of 50% and solid bonus to virus strength makes those ships excel in relic/data site hacking. Unlike their T1 counterparts, Covert Ops can fit a Covert Ops Cloaking Device and Covert Cynosural Field modules. They cost around 25-30 million ISK which makes them pretty affordable.

Unfortunately, what was mentioned before, T2 ships have an insane training schedule that can take weeks of training without skill injectors. Other than that they have pretty small cargo hold when compared to their T1 version but also ice-thin resistance to damage.

Rubicon expansion introduced new NPC faction to the game, namely Sisters of EVE (or SoE for short) with a roster of space-exploration ships. Frigate (Astero), cruiser (Stratios) and battleship (Nestor). Sisters of EVE are somewhere between T1 and T2 frigates, they are quite expensive but have higher bonuses to scanning and hacking strength but not as much as Covert Ops. What makes SOE ships different is their ability to actually fight, a typical Covert Ops frigate is a non-combat ship, usually with no drone bay or turret/missile bays, SOE ships are capable of fitting few turrets alongside a solid drone bay. SOE ships have very low skill requirements when compared to their overall efficiency and can fit covert ops cloak. Thanks to their amazing agility, huge drone bays and range they are often used not only as exploration ships but also as small gank-fleet or solo pvp ships. Unfortunately, they are extremely expensive, Astero will cut you back around 90-100 million which is extremely high for a frigate.

If you can afford this financial setback you will be flying one of the most efficient explorers before T3 cruisers, Stratios is perfect for long exploration session and if fit well can even perform quite well vs. sleepers or at ghost sites.

T3 cruisers built with locus analyzers can match scan power and virus coherence of a T2 exploration frigate, if you slam covert reconfiguration subsystem you will also be able to fit a covert ops cloaking devices with a 5-second cloak deactivation timer. When setting up a type of propulsion you can either choose faster warp speed or, which is ridiculously overpowered option, to completely ignore interdiction bubbles.

If you can there are no real downsides to flying a T3 cruiser other than extremely high cost (120+ million for the hull alone and almost double that in subsystems and modules) and ridiculously high skill requirements which will take about 10 weeks of training to at least drive one of those machines.

There are some exploration hulls that were published as part of some event or just appeared out of nowhere and turned out to be quite good at it. Gnosis, a Jove cruiser, is very good at scanning and combat making it a nice ship to run ghost sites with. Echelon, special edition ship with only one medium slot meant for Purloined Sansha Data Analyzer is pretty good for hacking but that’s it, you won't be able to find anything to hack with it. Zephyr is a good exploration ship for wormholes as it can run around C-space without waking up sleepers, unfortunately, the only high slot meant for probe launcher makes it pretty useless for anything else.

There you have it, folks. Remember to pick your ship according to your skill (being able to fly a hull does not make you a good exploration pilot) and to the capabilities of your wallet, you do not want to fly anything that you can’t afford to lose, when exploring you will quickly notice that you will carry more than your ship is worth, remember to make smart decisions and avoid those bubbles! Keep your d-scans running and fly safe o7