EvE Online Ships - All you need to know about EVE Ships 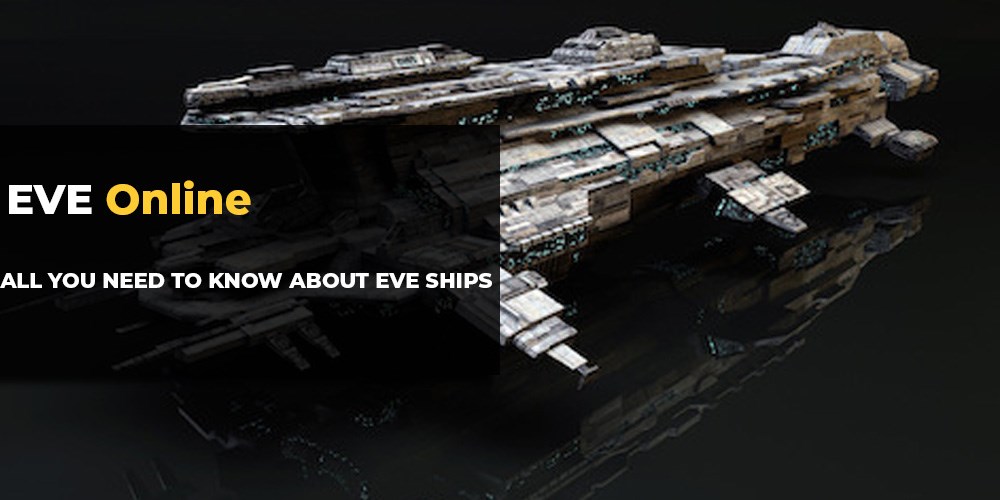 EvE Online Ships is what you will use when exploring the vast emptiness of New Eden space. In those vessels, you will fight your enemies, explore forgotten sites, transport products, mine for ore, or any other activity in EvE Online. EvE Ships can be piloted by players, but also you will encounter various NPC forces having vessels of their own.

Ships are operated semi-automatically, they will travel at selected targets and either approach or orbit them, there is no X-Wing style dogfighting.

Ships are manufactured and stored in stations (that can be either player owned or NPC owned).

There are three “layers” of ship hitpoints: shield, armor and hull. All ships have all of the three layers but different ships rely on a different type of “tank”. For example, Amarr Empire ships are known to have ships that have very strong armor multipliers but very weak shields. Each layer has different strengths and weaknesses, for example, shields are very susceptible to EM damage but are quite resistant to kinetic rounds.

All EVE Online ships rely on their ships batteries to perform actions with active modules, you can think of it as “mana” in classic RPG.

Every ship has a cargo hold and some have a separate drone bays that they can use to store remotely controlled drone units.

To fly a ship in EvE your account character need more than just ISK or PLEX - it has to have specific Spaceship Command tree skills trained. Some skills require a variety of prerequisite skills to be trained before unlocked. Skills for bigger ships, or ships of higher tech level, usually require training in smaller hull ship types. For example, to fly a Tech 1 cruiser you will need to have Tech 1 destroyer training, or, if you want to fly a Tech 2 frigate you will need to train your frigate skills to perfection.

Being able to fly the ship and being able to fly the ship effectively are two different things. EvE Ships can be outfitted with a variety of offensive and defensive modules, each requiring proficiency in different skill trees. With the overwhelming amount of possible skills to train it might seem a bit overwhelming, at first, to know which skills to train to become a good pilot. Thankfully EvE Online has some basic guidelines for each ship called “Mastery Level”. 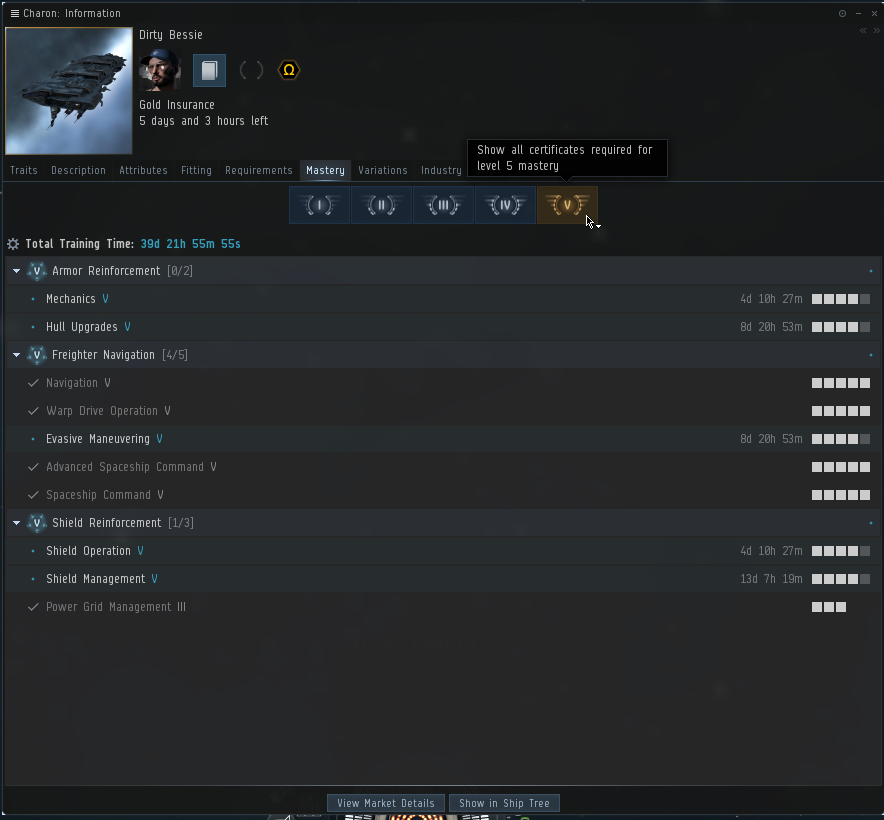 Mastery level will list all the skills required to fly a ship efficiently. The higher your mastery level, the better you will be at operating that ship. Please note that those are only guidelines, you are not required to train skills listed in the masteries but it is, in general, a good idea to follow these (at least at the beginning).

EvE Ships alone are just husks. Empty hulls with various bonuses and with various amount of module mounts. You can equip your ships to fit the various situation and to deal with various types of enemies, that process is called “fitting”. Every ship can be fitted in various ways, for example, you can have a frigate fit to deal with some small Level 1 NPC missions by equipping it with some damage and shield enhancing modules but you can also fit it be as fast as possible intercepting bigger enemy player ships and immobilizing it with modules that will block enemy warp capabilities.

Every ship has four different slots for their setup. High Power slots are used for aggressive modules such as turrets, lasers but also Nosferatu and mining modules. Medium Power slots are used mostly for propulsion and shield modules while Low Powered slots are used for weapon upgrades and armor modules. The fourth module would be rigs, that modify certain aspects of your craft navigation but unlike other modules rigs are destroyed when replaced or removed. 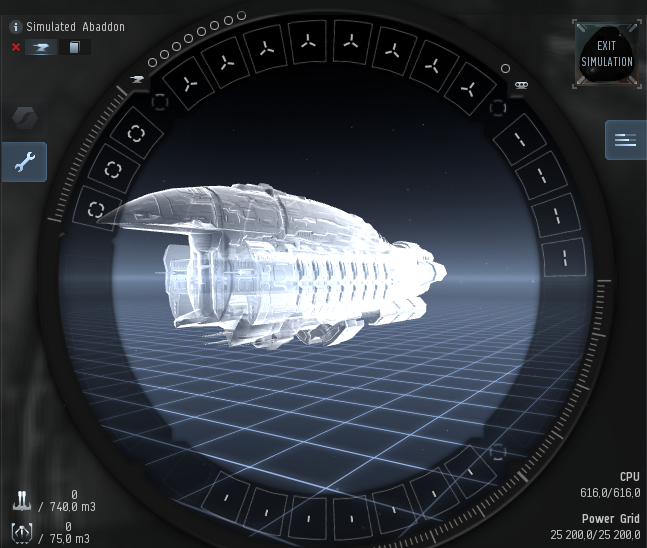 There are other ships that do not fall into the same categories as combat ships. There is a whole variety of industrial ships ranging from mining barges and small transport ships to massive freighters and capital mining command ships like Rorqual. In addition to that, many ships have their “Navy” or “Pirate” variants which are basically ships of the same class but with slightly tweaked bonuses and attributes.

Tech, often mistakenly called “Tier”, shows the complexity of the ship. Tech 1 ships are usually entry level crafts that are still capable of doing their job  correctly, Tech 2 crafts are highly specialized ships for specific type of combat or function, for example Tech 1 Amarr Destroyer, Coercer, is perfectly capable ship for some small-scale PvP or clearing Level 1 missions, its Tech 2 version, Heretic, is an Interdictor destroyer which is a vessel capable of planting “interdiction bubbles” that will capture enemies mid-warp.

There are two types of Tech 3 ships: Cruiser and Destroyer. T3 eve ships are extremely flexible in roles they can fulfill depending on how you build them, you can have Minmatar Loki with hacking and stealth bonuses or extremely tanky lightweight Bulletstorm since Tech 3 ships are apex hulls in their class they require a significant amount of various skills.

Not all EvE Online ships are made for war. There is a huge variety of vessels created for resource gathering or cargo hauling.

Industrial ships are your medium cargo ship, altho they can't haul as much as their big freighter brothers they are far more agile and can be fit to resist a wide variety of ambush attempts. There are two kinds of industrial Tech 2 ships, Blockade Runners are fast, agile and can cloak while Deep Space Transports are very tanky and have strong defenses against any electronic warfare.

Freighters are your big hauling daddies. Those slow-moving hulks don't offer much in terms of customization and depend entirely on their massive health pools. Their align time takes forever and their warp speed is slowest in the game but no other ship can carry that much cargo. Tech 2 Freighters are called Jump Freighters, and despite having smaller cargo hold than their T1 counterparts they can use jump gates and cynosural fields to travel safely in and out the null-security system.

Mining ships come in a variety of forms. Your entry level mining ship would be Venture which is a frigate class vessel with expanded ore cargo hold and mining bonuses. Mining barges are the first “real thing” when it comes to mining, their cargo holds are much bigger than Venture and bonuses to mining are significantly better. Exhumers are top of the line Tech 2 Mining Barges each with different specialization, Hulk has the biggest cargo hold, Mackinaw can hold most drones and Skiff is the tankiest. Orca is a mining command ship that, apart from being pretty efficient in mining by itself, can boost nearby miners to improve their efficiency. Rorqual, the biggest mining ship is designed as a mining command ship for mining in dangerous parts of space offering a wide variety of bonuses including the ability to compress minerals or fit a Clone Bay.