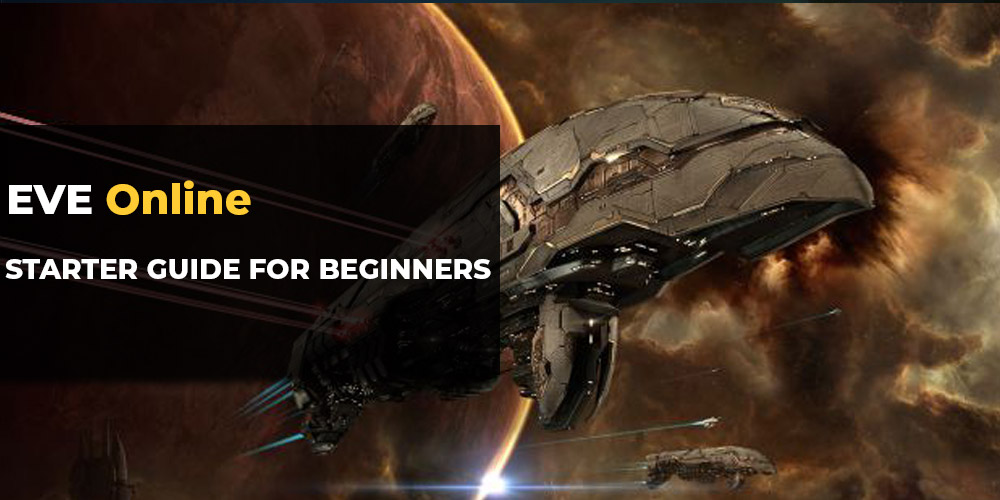 EVE Online you can select your character’s race, which will mainly impact your starting skills. Your starting race used to affect you a little bit more, but now it’s more of a background flavoring for you as a player.

Next, you can pick your bloodline, but again, it doesn’t truly matter, because you still receive your starting skills and starting ship in the same manner. What you’ll be able to do down the road won’t be impacted.

You can mess around with a very extensive character creator, but it is ok if you don’t wish to spend too much time on it, as you can come back later for further customization.

After you finish character creation, you’re going to jump into the game. You’ll find yourself in the middle of space.

The second part of EVE Online Starter Guide describes very important information. The screen you see when you start off is the screen you’ll be looking at half the time you’re in the game maybe. You generally want to make your overview bigger. Each one of the overview tabs gives you a bit of information that you need for certain tasks; we have a PVE tab, we have a Main which handles every task – that’s where enemy ships will come up-, we have Drones, and we have Friendlies.

EVE Online starter guide has begun in the tutorial zone. You can follow the tutorial if you wish, it’s pretty simple. They have you doing different things, and you can go through it at your own pace.

Some things that are useful to know in the beginning: on the left is your local chat, down at the bottom you have different modules, such as the afterburner module, that makes you move quicker. There is also a microwarpdrive. That's a little bit different in how they work. You also have a mining laser and a gun. The gun is obviously to shoot things.

What is buddy system in eve

One of the biggest tools at your disposal as a new player, coming into EVE Online, is the Buddy System. It’s incredibly useful for a new player. Someone can give you their invite link and get rewards from it, but it also allows for easy systems to be created to help new players. There are plenty of places you can find Buddy Codes, such as EVE Reddit. It’s a nice system for finding someone to help you in the first few days, and also earn some credits(ISK), because the buddy you find will receive a reward just for inviting you and will probably share it.

What happens after tutorial

You’ll eventually exit the tutorial zone and you’ll dock at the station of the system. The game should provide you with all the tools needed to reach this point: flying your ship and some basic combat.

After you finish the tutorial, you should make your way to the Career Agents. Once you open Agent Finder, you can set the Agent Type to Career, and this will show you all the Career Agents in the game. They are noteworthy because they’ll give you a lot of starting ISK, ships, skills, things that will benefit you greatly in the starting stages of the game. This will also teach you a lot about the different career paths in EVE, everything from Industry to PVP to exploration, you’ll learn through these career missions.

One of the most underrated things about EVE that new players don’t really know about is the “Show Info” section. If you show info on an object, you can get tons of information, such as services, resources etc.

You can set a destination, and if you undock, the game will automatically show you a path to get there through highlighted jump gates. You can also set autopilot on, but it should only be used in situations in which you’re not hauling anything expensive, not flying an expensive ship, or not in a zone where someone could engage you freely.

It is recommended that you finish all the career missions, just so you get a taste for each part of the game. Once finished, you should go to Arnon, the next step to players new to EVE, because here you can find the Epic Arc for the Sisters of Eve. In the agents tab you can find an Epic Arc Agent that will take you down the Epic Arc tree, which takes you across most of EVE, to different places, shows you different stuff, and gets you really acquainted with the game, so it remains a recommended next step, once you’re done with the career missions.

EVE Online is an MMO with a subscription fee you pay every month. It is possible to pay with your in-game cash, once you get very good.  You can buy a PLEX(Pilot License Extension) from other players for a sum ISK (InterStellar Kredit). This sum won’t be hard for experienced players to earn, but for someone new to the game, it presents a real challenge. So you should avoid the trap of trying to pay for your sub with ISK, when paying the subscription is easier and it allows you to enjoy the game.

This small EVE Online starter guide explains what you should be doing in the first three or four days, however long it may take you to go through the career missions and the Epic Arc.