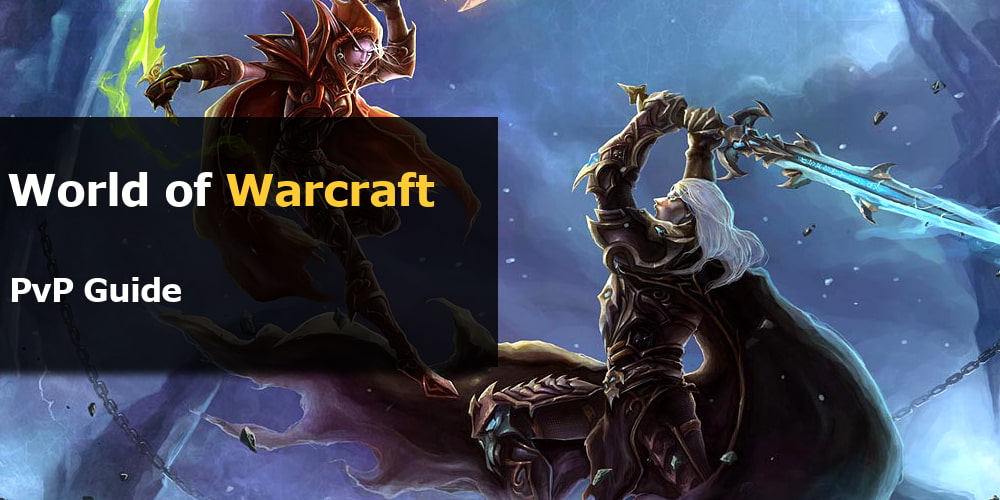 Welcome to MMOAuctions guide to Player vs Player combat in World of Warcraft. Here you can learn about the basics of PvP. We are going to describe where you can challenge other adventurers to a fight and what can you get from it. If you are interested in this topic then you are in the right place.

Types of PvP in WoW

Player versus Player (also referred to as PvP) denotes combat between two players in one of the forms available in the game. Currently, adventurers can challenge each other in forms stated below:

Duels - One on one combat between two players which occurs when one of the players challenge another one to a duel and his opponent accepts it. Duels can be proposed in almost every place in Azeroth besides big cities. The most popular places for duels are gates leading to crucial locations like Orgrimmar or Stormwind.

Arena - Most popular among PvP options. Arena fights take place in a controlled and instanced environment. Players who want to take part in the fight using this feature can challenge adventurers from the same faction which is not possible in open world PvP. Arena fights are available in 2v2, 3v3 and 5v5 formats. Teams that win battles will earn points that are used to unlock Transmogrification sets, special Mounts and PvP titles.

Battlegrounds - Basically it is a faction versus faction combat in a controlled and instanced environment. Unlike the Arena in Battlegrounds players will have to complete objectives that are the same for both Alliance and the Horde. They might involve various activities like capturing flags, controlling objectives or pushing resource carts. Just like in the previous case in this form of PvP players can also earn points that can be spent on rewards. There are two available types of battlegrounds - rated and unrated and both of them can be played on one of nine basic battlegrounds (10v10) or one of four epic ones (40v40).

Open World PvP - Combat between two players of opposing factions who fight against each other outside of any instances. There are no major rewards for this activity besides honor which you can spend on Transmogrification items.

The most popular type of Player versus Player combat in World of Warcraft is the Arena. Through the Matchmaking parties can earn rating (MMR) which determines a strength of the team. A group will be matched against a similarly skilled players with average Match Making Rating. The battle takes place for as long as one team is defeated through the death of all team members or their absence on the battlefield.

Once all team members are defeated a statistics window will pop up showing how much damage and healing was done by every single player. This window will also state how much rating players have gained or lost during the match and also will inform players of the MMR of opposing team. Players who have participated in fight will get some honor points and might have a chance at receiving strongbox with equipment piece. At the end of the season players with highest rating in 3v3 and 5v5 combat will be rewarded with special titles. Gladiator titles which are given to the best among best are coming with special custom Gladiator Mount and title.

Besides the rated version of Arenas there are also Skirmishes which feature 2v2 and 3v3 matches. They are available to the characters from levels as low as 15 with brackets every 10 levels. They were designed to give players a way to casually check closed envirnoment team fights without a need to play ranked right away. It is also a great way to test out new team members and see what they are made of. While Skirmishes are entirely casual they also give rewards. Players who take part in them can get experience or a strongbox that might contain equipment pieces, gold, honor or even more experience.

Honor system awards players with successful kills whether they were performed at the arenas, battlegrounds or in a open world with Honor Points. Only kills made through duels are not awarded with those as they could be possibly arranged. Earning Honor Points will improve player's Honor level which unlocks various rewards and gives players access to PvP abilities. Prizes which you can get through achieving higher Honor level are the Battle Pets, Mounts, Titles, Appearances and Toys.

The most crucial part in Arena battles which might determine of your success or failure is the team composition. There are various known synergies between classes that work extremely well. For example combining Enhancement Shaman's Bloodlust with Holy Paladin's Avenging Crusader can result in an insanely high burst damage potential. Frost Mage and Priest with Holy spec synergize well through a high mobility since both classes are very hard to catch up with for classes like Warrior or Warlock. Survival Hunter and Restoration Druid can combine their crowd control abilities to stunlock enemy healer.

Choosing a team that can play around certain abilities will drastically swing a chance of vicotry into that groups favor. By utilizing certain synergies players can get an unfair advantage against their opponents which can result in easy wins. Of course more experienced players will quickly recognize against which composition they are playing and how to counter it. For the beginners fights against well synergized compositions will be a nightmare.

PvP in World of Warcraft is a complex field and one of the most fun activities in the game which happens to be also one of the most challenging ones. If you want to learn more about World of Warcraft class guides, pvp guides, wow 3v3 ladder, Classic release, talent builds, WoW PvP ladder and more - make sure to check out our blog page where we provide best guides from all MMO titles. If you need class specific builds you can check out content on Icy Veins page. For example Arms Warrior Icy Veins guide will take you through every piece of information including talent tree and rotation so with Icy Veins Arms Warrior guide you will learn how to play this class to the bone.

What are the best PvP classes in WoW?

Any class can be the best one but to find which perform better than the others check pvp tier lists.

Is there PvP gear in BFA?

There is no PvP gear besides Transmogrification sets earned through achieving 1600+ MMR Points.

How does PvP work in WoW?

You can attack players from the opposing faction at almost every location.