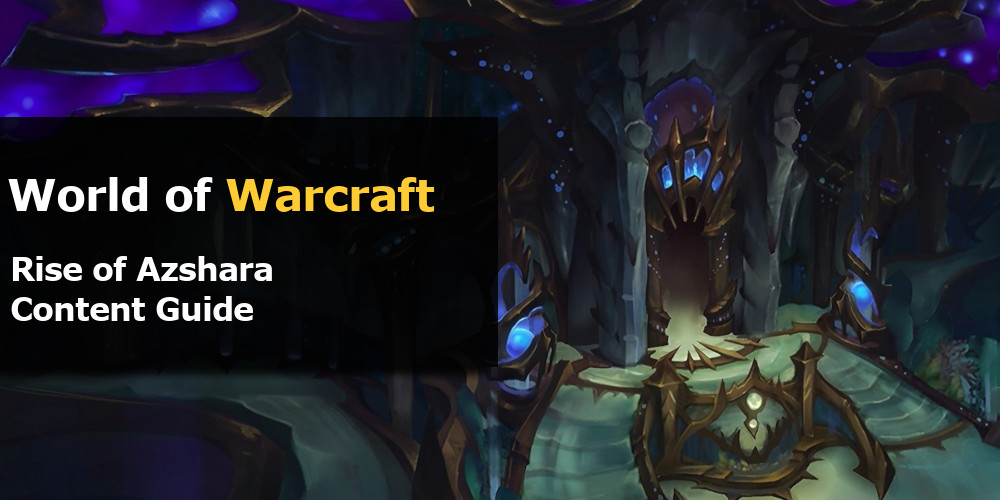 As the Rise of Azshara update is getting closer, we get to know more and more details about the contents of this patch. These huge changes are coming in in less than a week – Rise of Azshara release date has been announced to be June 25th. We will try to break it down in this practical content recap.

Before we dive into pets, mounts and all of that good stuff, there’s a new catch-up mechanic introduced in Rise of Azshara. It allows players to get gear with item level 385 that can later be upgraded to lvl 425 with relative ease.

Completing Nazjatar content will provide you with a new currency – Prismatic Manapearls. Among other things, they can be traded for Benthic Armor Tokens that you can later exchange for pieces of gear at Voidbringer Zorlan or Voidbringer Sturzah. It won’t grant you the most powerful armor set in the game, but it’s a great option for players who struggle with gearing up.

It was known for a long time that Rise of Azshara will bring Gnome and Tauren Heritage Armor. To unlock it, players will have to complete the War Campaign quest Stay of Execution and have the rank Exalted in their respective faction. Then they will get the access to a quest line that explores history and identity of their races. Completing that chain will result in the possibility of wearing their heritage armor with pride!

Plenty of new mounts, including flying ones are being added to the game in Rise of Azshara. They can be acquired from achievements, reputation, quests, professions, the new dungeon, rare spawns and vendors. The list is pretty long.

Ankoan Waveray and Unshackled Waveray will be available after getting Exalted with the respective faction in Nazjatar. The remaining mounts that rely on reputation with certain factions are:

Three specific mounts can be unlocked by completing achievements.

Snapback Scuttler – Undersea Usurper. This is the Nazjatar meta-achievement

Azshari Bloatray  - Glory of the Eternal Raider. It requires all the achievements in the Eternal Palace raid.

Another three can be bought from certain vendors:

Xiwyllag ATV can be crafted by blacksmiths and engineers with Super-Charged Engine and Reinforce Chassis (these two components of course require plenty of smaller ingredients to get made).

As far as rare spawn loot goes, in Nazjatar you can find Fabious and Royal Snapdragon, while in Mechagon there’s a chance of getting a Junkheap Drifter and a Rusty Mechanocrawler.

There are four new mounts available as a reward for completing quests. In Nazjatar you can get Snapdragon Kelpstalker for completing a quest called Good Girl and a Deepcoral Snapdragon for a Wild Tame quest. In Mechagon, the quest Drive It Away Today can provide you with a Scrapforged Mechaspider and finally, you can get a Child of Torcali for completing Wander Not Alone in Zuldazar quest.

You can get two mounts in the Operation: Mechagon. Aerial Unit R/21-X can drop from King Mechagon himself, while Mechagon Peacekeeper can be looted from the HK-8 Aerial Oppression Unit.

Plenty of new pets are also arriving to Azeroth when the update drops. Most of them can be acquired by killing rare creatures or finding treasures, but there are some other sources too.

You can also buy certain pets from vendors. These ones are: Chitterspine Devourer, Crypt Fiend, Drowned Hatchling, Pearlescent Glimmershell and Ziggy.

We recently got some new information about the zones that will be added in patch 8.2. Let’s recap the most important things about Nazjatar and Mechagon.

We’re not going to go into details about the storyline, so we don’t spoil it to anyone. All you need to get to Nazjatar is a character at level 120. If you have a character that reached the level cap, you should get one of the quests. Alliance members will get The Wolf’s Offensive while Horde players will get The Warcheif’s Order. These quests are the beginning of this long chain of missions that will lead you to Nazjatar, then to face Azshara and to finally get back.

There are some more details about the friends that we’ll be able to make in Nazjatar. After arriving to Nazjatar, we will almost instantly meet either Waveblade Ankoan or The Unshackled. With both of them you will be able to collect Reputation to become Honored, Revered and finally Exalted. The Waveblade Ankoan have their base in Mezzamere, while the Unshackled live in Newhome.

Furthermore, progressing in this system will provide you with essences, recipes, a pet, a mount and a tabard. You will also meet more powerful friends, because each tribe that exists in Nazjatar will grow stronger as you help them fighting Nagas.

There are multiple ways of getting Reputation. Players will be able to earn it through main quest line, world quests in Nazjatar, dailies and killing Summons from the Depths – powerful minions of Queen Azshara, as well as slaying rare spawns, that will be marked on the minimap.

Other ways include completing contracts, advancing your bodyguard, finishing emissary quests, defeating opponents in Mardivas’s Laboratory, winning Pet Battles and finally through the warmode PvP quest - The Battle for Nazjatar.

The Nazjatar content will also introduce a new currency – Prismatic Manapearls. It will be used to buy mounts, pets and special Benthic gear.

Pathfinder Part Two is coming alongside the Rise of Azshara patch. Of course it means the return of soaring through the air! Nazjatar and Mechagon are no exceptions to that. It has been confirmed that players will be able to use flying mounts in this city.

Besides the main questline and of course the Eternal Palace raid, there will be a lot of interesting side quests. We will be able to learn the story of Keyla Moonfal’s ghost and help her in saving her father. We will have the privilege of rescuing Mrrl and his murloc friends as well.

Another interesting NPC is a mad mage Mardivas. He will give us some puzzles to solve and we can help him create and then defeat various elemental creatures in his laboratory.

Players who love the compex Lore of World of Warcraft will find something for themselves too. Exploring the ancient ruins of Zin-Azshari will provide some extra information about the history of Night Elves, Kaldorei Empire and Queen Azshara herself. We’ll get that through the lens of personal stories of Shandris Feathermoon and First Arcanist Thalyssra. We’ll also get to know a little more about Snapdragons known mostly from previous installments of the series.

The main questline of Mechagon begins with a quest “A Worthy Ally” (for Alliance) and “Becoming A Friend” (for Horde). The whole story revolves around King Mechagon who presumably went mad and forces all of his subjects to replace more and more chunks of their body with machine parts.

The zone heavily embraces its themes. Players will be able to do lots of tinkering and build structures, fortifications and construct mechanical mounts or pets. A robot called Pascal-K1N6 will serve as a sentient crafting station where every character (regardless of class or profession) will be able to construct some crazy things with materials and schematics found around Mechagon!

Players will also get a chance to interact with both the partially mechanized Gnome who formed the Rustbolt Resistance and the Mechagnomes of Mechagon.

Get ready to face Azshara!

That will do it for our Rise of Azshara content guide. As you can see, there’s plenty to do in the endgame thanks to the Heart of Azeroth changes. At the same time a lot of new collectable content is going to be available for the most ambitious players!

Which of the new pets and mounts are your favorites? What do you think about the new zones? Let us know in the comments!

Furthermore, there have been significant changes to the Heart of Azeroth if you want to learn more about it - check out our WoW 8.2 Heart of Azeroth Guide! If you’re interested in buying or selling some WoW-related virtual goods, make sure to take a look at the World of Warcraft section at MMOAuctions.