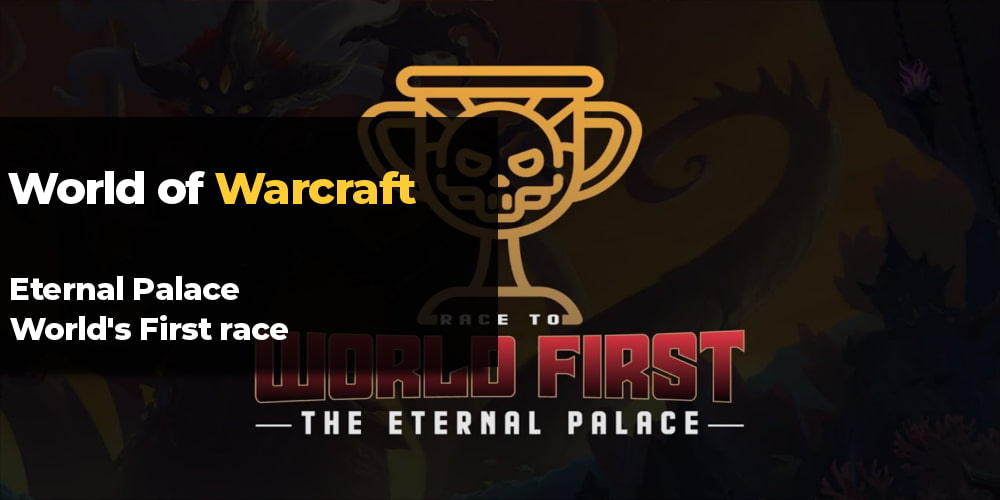 The newest Battle for Azeroth raid is live. Thousands of fans throughout the community can’t wait to see, who will be the first to beat the last boss of Eternal Palace raid - the dreadful Queen Azshara herself. Currently the leader is changing and World of Warcraft community is shivering out of tension, as thousands of fans are watching the struggle on several live streams.

After slow start Method guild managed to finish first at 4/8 mythic and everyone saw an absolute favourite. Method are notorious throughout the community for their efforts in World’s First runs and pioneering of broadcasting their gameplay, but we may have a surprise, as Limit succeeded as first to score 5/8. Although we need to keep in mind, that NA starts the race with 16 hour advantage and Method are the only EU guild in top 10 of the race.

Why is World’s First important?

You may think that succeeding in a video game is a fribble, nothing worth attention. But you cannot deny the overwhelming growth of esports. More and more real-world sport organisations are putting their money into esports, as they see its potential

Making a name for yourself

For centuries there was a competition and rivalry around the world. Who’s the strongest warrior? Who’s the fastest? The cleverest? First to invent electricity or car, first man to swim the La Manche canal, first woman to climb K2, first disabled to run a marathon and so on. Trophies and awards, prestige and eternal glory, recognition and respect.

That’s exactly what World’s First is for WoW community. Each raid is another K2 to reach. Each boss is a La Manche canal to swim. It’s making a statement: ‘We are the best of the best’. In World of Warcraft’s history the World’s First will be forever remembered. It’s a non omnis moriar of MMO video games.

If you don’t know, what’s it all about…

… it’s about money. Wherever a large group of people is meeting to watch an event, there are also companies willing to pay big money for an opportunity to showcase their products. As mentioned there are hundreds of thousands people watching the World’s First live streams. Half a million gamers and WoW fans staring their eyes out to see who will be the first to go 8/8. Half a million of potential clients. It’s a huge advertising potential and an opportunity that you cannot miss.

Also there are sponsors. Gaming gear sellers, Internet platforms owners and so on. All of them want to send a message to viewers: ‘We support these players! We are behind their success!’ by placing their logo on someones jersey or giving their products to players. There should be no wonders that guilds are ready to invest millions of in-game WoW gold to gear up for the raid.

Owners of Method guild, one of the most known and strongest WoW organizations, are not hiding their concerns about commercialization of the event. There is less attention paid to the gameplay, and more attention for exposing commercials and exploiting the event for profit. They are afraid that sooner or later players will be hired by big companies and it will kill the sportsmanship, spirit and pure fun. They are also worried, that financial potentates will make an attempt of taking over what used to be a player-run event.

Is the threat real? Or maybe Methods are worried about competition? What do you think? Post your comments down below or use our Facebook and Twitter. Meanwhile we're heading towards Method and Limit live streams to see, who's coming on top.