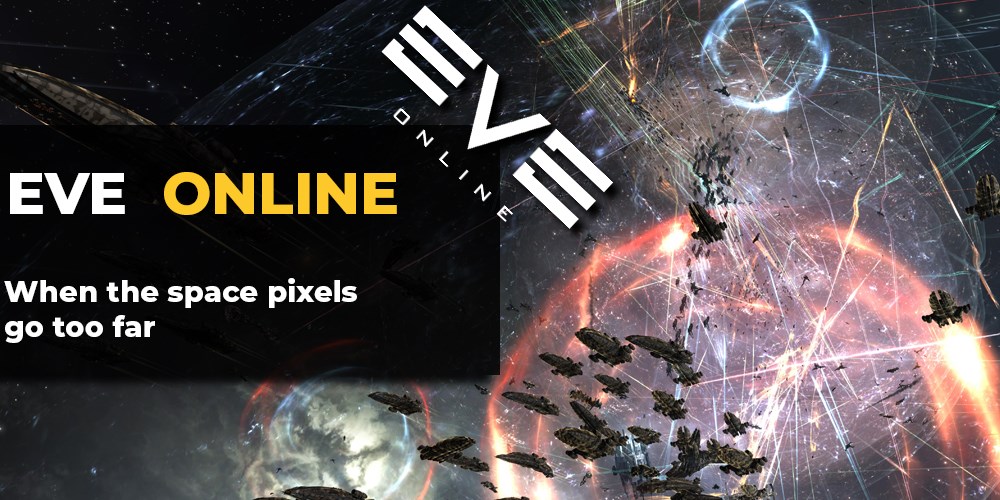 EvE Online has a tendency of making headlines worldwide with battles of mind-blowing proportion. This year kicked off with one of the biggest battles in EvE Online history "the million-dollar battle" which earned a Guinness World Record of having 6,142 players deployed in a single online combat scenario at the same time. This massive fight in January did not turn out as destructive as it was anticipated and both sides came out mostly unharmed, but it set in motion events that led to all-out escalation, a total war between The Imperium and Pandemic Horde.

The most recent battle in X47L-Q system had the size and scope of the January's 'million dollar battle', with one difference: this time both sides committed their heaviest guns resulting in highest Titan casualty count and one of the most destructive fights (when counted in EVE ISK) in the long history of EvE Online. But let's draw some context to what actually is going on and why New Eden is currently on fire.

The battle of X47L-Q  is just a part of a very long conflict that dates back to early 2016. The two sides: The Imperium and Pandemic Horde first clashed in a war that has later been known as World War Bee or Casino Wars. A ragtag coalition of various alliance hired by a nefarious gambling kingpin Lenny Kravitz2, owner of an EvE lottery website (sanctioned by CCP but recently closed) SOMER Bink, managed to completely wipe The Imperium (a.k.a Goon Swarm/Goons) from all their territories. Despite losing their systems, however, Goonies stuck together and sworn revenge.

Closing Somer Bink and similar EvE-gambling websites by CCP shut down an endless stream of EvE ISK that fueled the 'Moneybadger Coalition' forcing that band of mercenaries to dissolve. With the disturbing threat of gambling-money fueling wars gone The Imperium begun rebuilding their former glory in Delve region, gathering resources and ISK like a locust swarm, earning trillions of ISK monthly and pumping all of their gains into rebuilding their fleet.

Fueled with rage and hatred Goons rebuilt their power extremely fast. In early 2017, Mittani and friends were finally ready to flex some muscle by launching a Thousand Dreadnought March.  In this event, Imperium moved a thousand Dreadnought class capital ships and a couple of fleets of sub-capitals to a offensive staging point in the Hakonen system.

Sadly this show of power ended pretty fast and no major battles took place, but it showed, former 'Casino Thugs' the logistic capabilities of the new Imperium. Vigilantes soon were forced to retreat back to Delve and defend their new home which resulted in a pretty uneventful trench war that died out soon after it began. This initiated a massive arms race between The Imperium and Pandemic Legion interrupted by occasional skirmishes to disrupt enemy operations.

By the time of "Million dollar battle," both sides managed to amass a huge number of pilots along with super capital units. That day trillions of ISK were deployed on the field but due to system difficulties, massive lag and bugged Keepstar station the entire encounter ended with minimal losses on both sides. This disappointing event sparked an all-out war, both sides now know what forces they can expect from their enemies and both sides know that it will get bloody. Since January the tensions were rising but the only serious fight's community witnessed was trash-talking on forums and espionage attempts from both sides. And finally, the X47-L happened.

Battles like this are a rare occurrence, the only reason for an alliance to throw everything - literally EVERYTHING -  in, is when they are absolutely sure they have the upper hand and want to humiliate and completely crush the enemy. This time, both sides were sure of their superiority which led to massive turnout and a staggering amount of losses.

Imperium and their current allies Legacy started to gather at a staging point in the system at around 7 PM EvE Time positioning themselves at the nearest enemy Keepstar station. Meanwhile, Northern Coalition and Pandemic Horde deployed their forces at the station preparing for the siege. The goal of the attackers: take down Keepstar shield, the goal of the defenders: stop Keepstar from taking damage for 15 minutes to lift the siege (basically: kill all enemy titans). Both sides began with a titan doomsday weapon barrage which pretty much looked like naval side-cannon fusillade later devolving into a chaotic supercapital shoot-out unlike what we have ever seen in EvE history.

EvE servers cope with such a massive load of data being processed by applying a "Time Dilation" or "TIDI". This puts the game into a "slow motion" state which allows CCP servers to catch up with the calculations, despite that system players on both sides still faced disconnects and server stability issues. Forces of The Imperium managed to meet their objective early in the course of battle but instead of retreating, the vengeful forces of The Imperium decided to stay longer to deal maximum damage to Northern Coalition allied forces.

New Eden Reports and INN News channel reported a total of 540 titans (each worth around 100bilion eve ISK to make) and over 510 supercarriers (30 billion ISK buy) deployed. The estimated value of deployed forces peaked at whopping 69 trillion ISK which would be enough to buy 23 million units of PLEX (a "premium" currency, working in a similar fashion to World of Warcraft token) which is worth over 1 million US dollars.

According to CCP report 56 titans, 21 supercarriers, 406 dreadnoughts, 21 carriers, and 307 force auxiliaries were destroyed (among other smaller ships) which resulted in PLEX worth of $151,212 US.

The attacked Keepstar is currently in its last stage of defence and The Imperium and Pandemic Horde will clash again next week. We can only speculate what will this total war bring but it sure will be dirty and bloody.