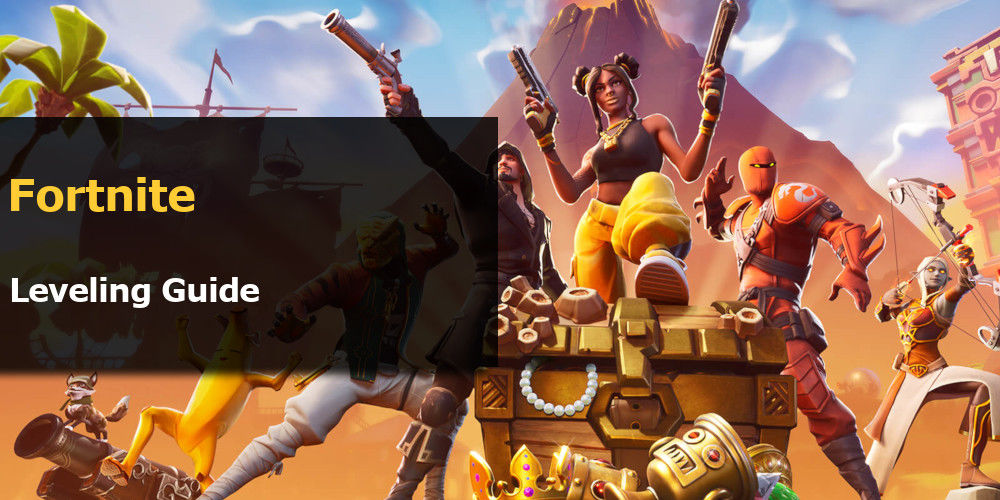 Online shooting games have evolved since Quake III: Arena, CS 1.6 or Call of Duty II. Graphics became advanced as well as shooting mechanics, players create new tactics and gaming is a valid sport in NA. If you want to be pro someday, then this Fortnite leveling guide is one of many ways of fulfilling the dream.

Originally Fortnite only had a PvE-only mode called Save the World. After the success of PUBG and H1Z1 becoming more and more popular Epic Games decided to create their own battle royale version of Fortnite. It was released in 2017. Currently, it’s available on a personal computer, Xbox, Nintendo Switch, PS4, and mobile.

Rules are simple. A hundred players land on an island with a purpose to be the last to survive. They can search the area, trying to find useful things like weapons and materials to create their own building site. To avoid camping strategy and prevent participants from trying to hide in one place, there is the Storm - a zone that deals damage to everyone outside of it. The Circle is constantly shrinking to narrow the playable area down and force players to stay inside and face each other.

Fortnite is a heavily skill-based survival game with a lot of unlockable content. The player needs to level up his account, in order to unlock all of its features. There are two ways of climbing.

How does Fortnite leveling work?

You advance either by gathering experience points or leveling up your Battle Pass Tiers.

XP in Fortnite can be acquired in a couple of ways. The player can gain them by:

Match XP gains are highlighted in a table below:

Most of the good players put survival time over eliminations. After one minute since the start, you earn 17 XP points per minute, which gives max 238 XP per game. Being close to the top is far more rewarding than chasing a single kill.

What’s more, I have found a few comments, which recommended different game modes for different players. Better players should play solo, duo or squad. This is a more convenient choice for them because they are able to get Victory Royale (with its XP bonus) consistently. Less skilled players should opt for Team Rumble. The game goes on until one of the teams score 100 kills and win, thus games last longer than 15 minutes. This way players will receive full match XP alongside with first kill bonus XP, which is basically guaranteed.

Each day there is a challenge to complete. Challenges that are yet to be completed stack up to three. Finishing a single daily challenge gives you 500 experience points and 5 Battle Stars. They refresh each day, which makes them reliable, sustainable ways of progress.

These quests vary from simple things, that you can accomplish on the run to some funny or weird stuff. For example, in week 4 of Fortnite season 9, there was a challenge to dance in three major fast-food locations - Holographic Tomato Head, Giant Dumpling Head, and Durrr Burger Head.

You should also try out 50v50 mode whenever it’s available. 50 vs 50 is a limited-time event mode that’s useful for completing challenges as there are not that many enemies around and the players are split into two teams. You will receive 50 XP for the first teammate revival and 10 more for each subsequent one.

Battle Pass is a sort of a premium account in Fortnite. For 750 V-bucks you can buy it to propel your progress and improve your XP-gain rate. V-bucks are the in-game currency used to purchase items from the in-game Vindertech Store in Save the World or to purchase cosmetic items from the item shop in Battle Royale. Here’s a list of methods used for collecting V-bucks.

The first four methods are free. Purchasing V-Bucks is a paid option per se. Earning them from the Battle Pass is also indirectly paid - in order to get V-Bucks from Battle Pass, you need to buy Battle Pass first. The good news is that if you purchase a premium pass mid-season, your progress from the free mode is applied to the Battle Pass mode right away. You'll receive all the rewards you'd get if you had decided to sign up earlier.

There are 100 tiers of Battle Pass. The higher you climb, the more you can get out of it. The way to advance is by collecting Battle Stars. You can get them by:

Also if you are rich or impatient (or both) you can buy your way to the top levels. Each Tier of Battle Pass costs 150 V-Bucks. On top of that Battle Bundle can unlock your next 25 tiers for 2250 V-Bucks (40% total discount - sounds like a fine advertisement!).

How to maximize your XP and Battle Star income?

Simply playing the game to fast level up can one day turn out to be hard work. You’d like to gather XP and Batlle Stars faster but you don’t know how? You can search among bazillion of websites, visit countless conversations on Reddit, try YouTube video guides waste countless hours. But easy, in today’s article, we’ll deliver to you all the tips, tricks, and details you could possibly ever want to read.

Don’t forget to combine those with Double XP Weekends!

8.40 update turned out to include some important patch notes. Season 8 friendly XP boost could give up to +40% XP per one player joining your team maxing out at 120%. In general, you needed three friends with high Battle Pass Tier to unlock this boost's full potential. In season 9 there were some player-friendly adjustments - now the bonus starts 60% and goes up to 120%. What’s more important, it’s activated whenever at least one friend joins you!

Developers bumped into an idea to place a hundred chips throughout the map. It’s something that reminds me of Grand Theft Auto packages or Assassin’s Creed flags, feathers and so on. Finding the Fortnite Fortbyte one after another will eventually lead you to the rewards. Some of them are acquired for simple quests like passing 25,000 XP mark, some are harder to obtain (finishing top 10 in Squads, Duos, or Solo, 100 times), some of them you’ll need to find on the map. However, if there is a way of leveling up faster, it is worth a shot.

There is quite an interesting relation between XP points and Battle Pass Tiers. The higher Tier you’re in, the more XP you can get via XP boosts and the higher you level up in experience, the more Battle Stars you can receive.

What is it all for?

In theory, you don’t need any of those. If you learn to play the game like a pro, you will do just fine using only a pickaxe. In practice, there are a few reasons to level up as high as possible.

It’s not a secret that not every item is available for everyone since the start. By leveling up you gain the possibility to receive some cool stuff. Who would refuse to have the dopest shotgun skin or this sick Vendetta edition? Who doesn’t want to say: “Hey, mate, check out my gear!”? For example, earning XP can get you style options for Legendary Skins unlocked.

The more you play, the more stuff you collect. Naturally, you can achieve all of that by simply playing the game, but being better at it really helps to do it faster. Higher skill means more XP, more Battle Stars, higher Battle Pass level, larger rewards and bonuses and so on. Especially reward for high season level is far more valuable than regular grind stuff because they are reserved only for elite people. Enemies seeing you with the latest rare skin may feel some sort of respect. Or they may think you have a rich grandma, who doesn’t know her credit card is missing.

It’s hard for me to imagine the best Fortnite players and streamers armed with basic weapons and skins. I subscribe to their official social media profiles like Facebook or Twitter posting pictures of them having the rarest set of equipment. Some of them do actually have dedicated skins, like Ninja. Best players are a key factor in popularising games throughout the world. They become role models, they help younger players to stay on the right course in gaming.

Having mixed, wide in-game content is a great long-term strategy for the company. This brings freshness and diversity, which keeps a player’s motivation at a high level and his eye set on the prize. Also, cooperations with some non-virtual sports (like the latest Michael Jordan event) is going to give huge profit and hype.  With these tips, it’s just a matter of time until you reach the top and unlock the entire content.

Do you have any comments? Please, share it with us on Facebook or visit our website https://mmoauctions.com and check out the latest news from other games on the fly.