Battle for Azeroth Review - what about the latest WoW expansion? 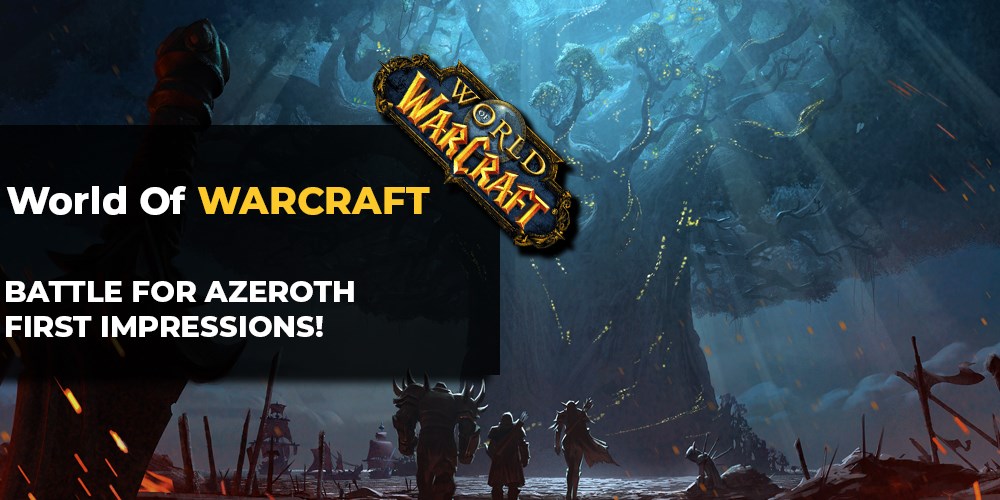 World of Warcraft: Legion expansion finishes with a bang. Literally. Sargeras, the prime evil of World of Warcraft lore has been defeated by heroes of Azeroth and astral godlike creatures called Titans. In his last defiant act, the flaming space-satan stabbed our world, Azeroth, with his massive sword, wounding it and probably changing Azeroth forever, unleashing ancient, twisted, evils. Check out our Battle for Azeroth Review.

But that’s not what Battle for Azeroth is about! Despite a massive sword sticking out of the side of our planet Alliance and Horde are more concerned about fighting each other over a new element that emerged from that cataclysmic event - Azerite.

Back to the roots

Just like Pandaria, Battle For Azeroth is supposed to be taking a break from the galactic struggle between good and evil, despite the entire expansion having signs of incoming Old God threat all over the place, the main focus of the expansion is the conflict between the Alliance and The Horde and Blizzard it’s doing a good job in bringing back the good old faction identity that has been lost during previous expansions where both Alliance and Horde players were fighting against a common foe. Now we are back to what made World of Warcraft great in the first place: hatred between the two factions.

The entire conflict theme of Battle for Azeroth begun before the expansion actual launch. In the pre-release event, Horde players help Sylvanas Windrunner, the Banshee Queen and Warchief of the Horde burn the Night Elf capital - Teldrassil and Alliance players have a chance to get their revenge with their (failed) siege of Lordaeron. First time in a long time those two factions feel truly separated and up-in-arms which show not only in the expansion lore but also in the player interactions, hatred between the factions feels genuine and it feels good.

First time ever factions get more than separate starting zones. Battle For Azeroth gives each faction an entire, separate, continents each with three unique, lore-intensive, zones.

Alliance players are set to seek aid from the maritime nation of Kul Tiras and their massive navy to help with the war effort against the horde. Unfortunately, Jaina Proudmoore, one of Alliance leaders and a Kul Tiran, is not welcome at her homeland and is accused of high treason. During our adventures in Kul Tiras, we will uncover the witchcraft behind the haunted forests of Drustvar and secret behind Waycrest family, in Tiragarde Sound you will uncover a high-treason plot that aims to overthrow currently ruling Proudmoore family using pirates and… Azerite.

Stormsong valley will introduce us to tidesages and their involvement with tentacles. The entire storyline is focused around Jaina Proudmoore and missing Kul Tiran fleet, it's very character-driven fun, and quirky at times and has a stench on the Old Gods all over the place. Boralus, the Kul Tiran capital looks amazing and feels like the most alive alliance city so far, this bustling port reminds me of when I first entered Novigrad in Witcher 3 - I did not expect to see something on that scale in that game. Even the story is very character-driven and eerie theme of Drustvar sent chills down my spine, the plot feels pretty flat and one-dimensional when compared to Horde.

Zandalar is a starting zone for Horde players, where Sylvanas seeks aid of the ancient Zandalari Troll Empire. Citizens of this last remaining troll empire do not trust us as they still lick the blow we have dealt them in Pandaria (Zandalari Trolls were responsible for the resurrection of Lei Shen, the Thunder King). Fortunately, enough king Rastakhan needs our aid as he feels that something is amiss and expects his advisors to betray him. Apart from the political strife, Blood Trolls of Nazmir swamp and serpent people of Vol’Dun desert plan to invade the Zandalari capital of Dazar’Alor as it turns out that the city is home to the last working seal that keeps the Old God Ghuun locked beneath the surface of the island.

The entire Zandalari campaign revolves around a much wider picture than the Kul Tiras one. Here we have Rastakhan interacting with Loa, making deals with gods of death, stopping Blood Trolls from summoning their own vengeful Blood God and dealing with untrustworthy advisors. Horde campaign also introduces one of the most fun side-characters ever introduced to the game: Bwonsamdi, the Loa of Death which is based on Haitian VooDoo deity Baron Samedi.

Not as fun as promised

Don’t get me wrong, I have never had as much fun playing a World of Warcraft expansion as I have with Battle For Azeroth. Quests, zones and plot are extremely captivating and characters are well written and thought out. However, Battle for Azeroth promised two features that did a lot less than promised: Warfronts and Island Expeditions.

Islands Expeditions were supposed to be this randomized instance on a randomly generated island with randomly generated foes and encounters, something, that would make grinding Azerite Power (an equivalent of Legion Artifact Power) way more fun. Unfortunately, that’s only half-true. Each week we can land on one of three preset island types occupied with not very random enemies. Once there we will be able to perform one of three or four quests which basically come down to “find a key/shovel/torch/antidote to free an npc”, as expedition goes on there is a possibility of a “random” encounter like Azerite golem spawn or Naga invasion. But it all goes down to how little of an impact the “randomization” has. After you have done few of the expeditions you will notice that it actually does not matter what random encounters you will face, it’s all the same - just kill whatever spawns fast and pick up azerite to win.

Blizzard did a good job on enemy NPC AI. If you choose to perform non-pvp expeditions you will face one of four or five possible alliance NPC teams that consist of made up classes (like a shadow priest using frost mage abilities etc.). Those computer-driven enemy “players” will behave very realistically, and it’s really impressive how well they adjust to the battle, unfortunately, their AI is not perfect and can be exploited to players favor. Island Expeditions have a weekly “quest” that demands you to gather 40 thousand azerite during your expeditions (heroic expedition for example is worth 8 thousand azerite), performing this past that quest is currently pointless. 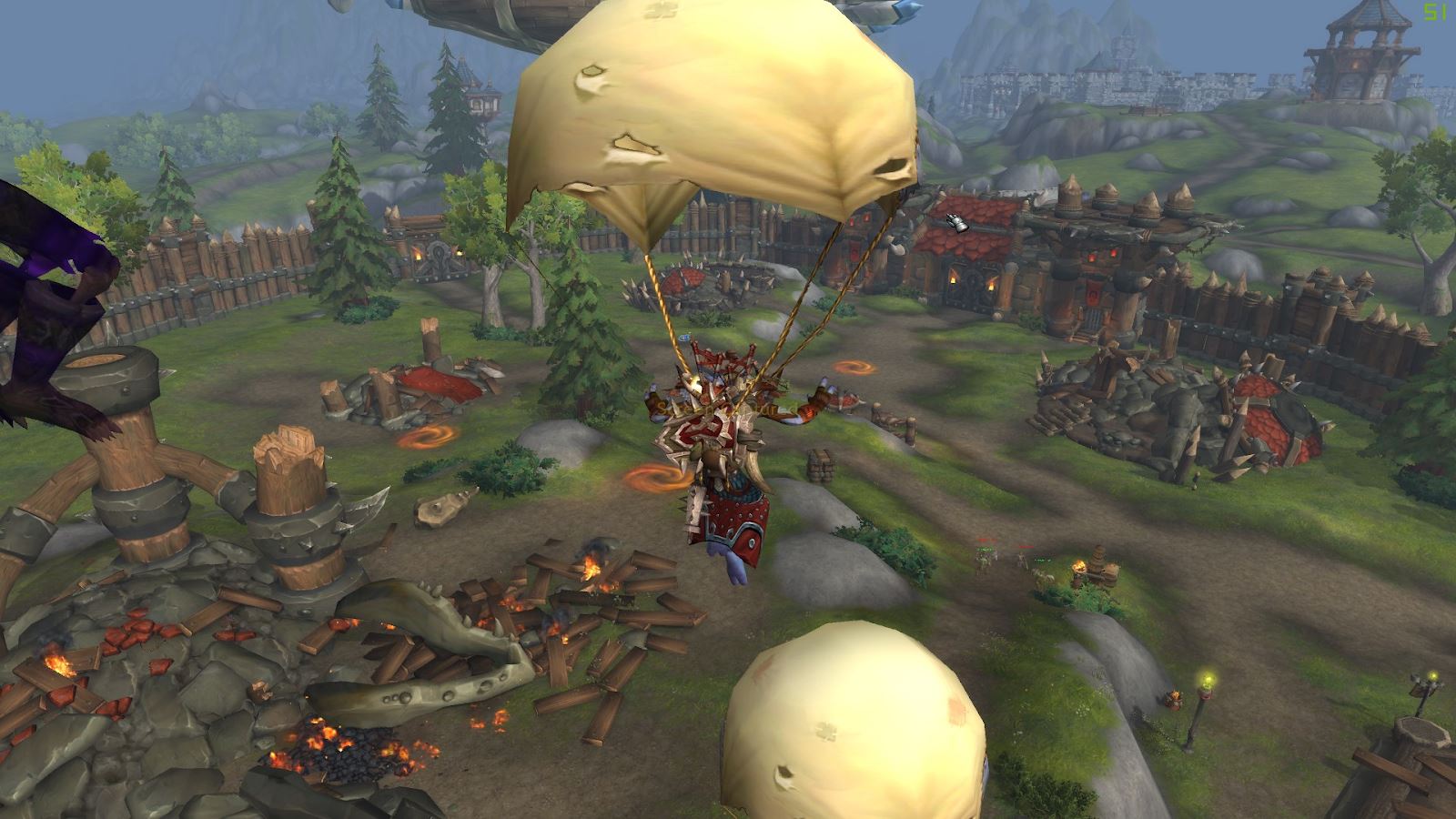 Another big promised feature were Warfronts. At the time of writing of this article Warfronts just opened for Horde players and the hype surrounding this Horde vs Alliance RTS-style encounter for domination over various lands of Azeroth died instantly. Warfronts, basically, are a weekly PvE campaign where you fight against enemy faction NPC’s. Completing a warfront gives a faction access to some quests and a World Boss, once the week is over its other factions’ turn. And that’s pretty much it. Very underwhelming and very anti-climatic. Warfronts will be “just another” do-and-forget weekly activity that you will do “just in case rewards titanforge”.

The two major new features of Battle for Azeroth feel underwhelming at the moment, we have to hope, that as expansion goes on Island Expeditions and Warfronts will become a bigger part of World of Warcraft. Both modes, especially warfronts, show huge potential and can become so much more when done right.

Battle For Azeroth begun by taking away our legendary weapons along with their built-in “talent tree”, to fill the void we are now getting a legendary necklace Heart of Azeroth. But unlike the Doomhammers and Ashbringers, it does not have an inherent trait system, instead gaining levels on your neck piece will allow you to access higher tiers of traits on your Azerite Armor.

Azerite armor pieces: head, shoulder and chest can be obtained via various means like raids, dungeons or world quests. Once you have your piece of gear you can now proceed to unlock the 'rings' of traits, higher the item level of the Azerite gear is the higher Heart of Azeroth level you need to unlock all of them. 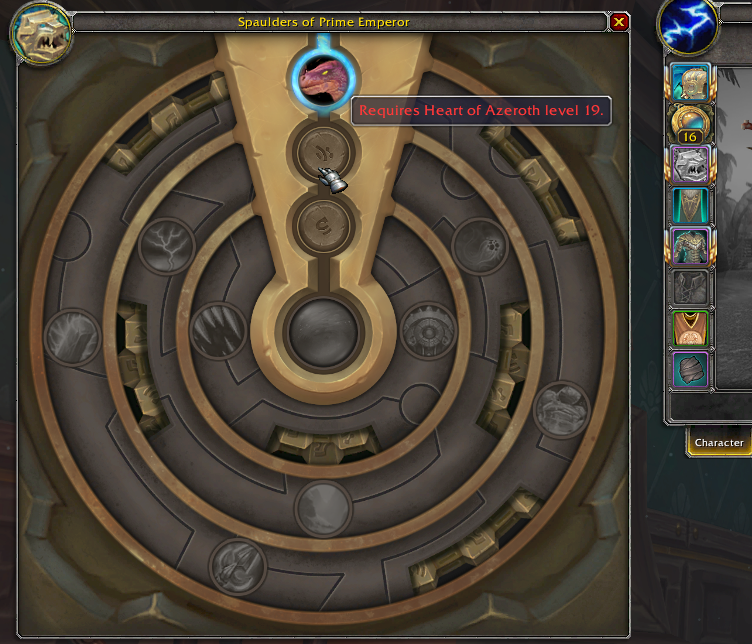 The acquired traits are locked to the items, there is no RNG involved. If you drop Spaulders of Prime Emperor (picture above) you will always get the same set of traits on it, this will allow you to pinpoint the traits you want and grind them to your heart's content.

Unfortunately, the traits are few and far between when it comes to utility and each class has a limited selection of 'best in slot' traits while others being complete garbage. Furthermore, the presented traits do not influence on how you play just like legendaries in Legion did, Azerite traits just feel “kinda there”, you won’t even think about them while performing your standard rotation. Just like you could alter your gameplay by mixing various legendaries, there is nothing game changing about Azerite. Azerite trait theorycrafting limits itself to running few simulations, finding out which give you most DPS burst and sticking to those that have best results, they won't bring you new combos or interactions between the various skills unseen before.

The entire system is dull, uninnovative and lackluster. Hopefully, we will see more fun traits in the future.

Battle For Azeroth ships with 10 available dungeons and one raid and I must admit I have never had so much fun in instances before. Dungeons are well-designed, beautiful, and lore intensive. Each has its own style and music theme. Wayrest Manor, for example, has a truly Lovecraft meets Addams Family feel to it while Atal’Dalor will expose you to the grandeur and wealth of the Zandalari Empire. Boss battles are punishing but in a good way, it's quite surprising how Blizzard, after creating hundreds of boss encounters, can still come up with something innovative and fresh.

Pandaria has changed World of Warcraft's art direction for good and it continues in Battle For Azeroth. Stunning skyboxes complement the picturesque vistas of Kul Tiras, while shadows of Nazmir swamp give you an immersive feeling of unrest. Each zone has its one unique style, one that has never been seen before (except maybe for Vol’Dun which is pretty similar to Uldaman).

Capital cities are surprisingly well done, Dazar’Alor is this mayan-inspired golden city of the, once great, Troll empire while Boralus is a massive busy port city. After the “meh out of 10” generic music score of Legion, Battle for Azeroth serves us various zone-specific themes, each instantly recognizable, from the savage tribal drums of Nazmir to grand orchestra of Boralus, the variety, and quality of music score is staggering and reminds me of how diverse music was back in Vanilla.

Battle For Azeroth had a smooth launch but a rocky start. Riddled with bugs and, now fixed, exploits it got mixed user reviews upon delivery. Fortunately enough Blizzard was quick to react and we have now something that is brewing to be the best World of Warcraft expansion since Wrath of The Lich King. The direction is right, now they just have to stick with it. How do you like our Battle for Azeroth Review? Let us now in comment form below the review.