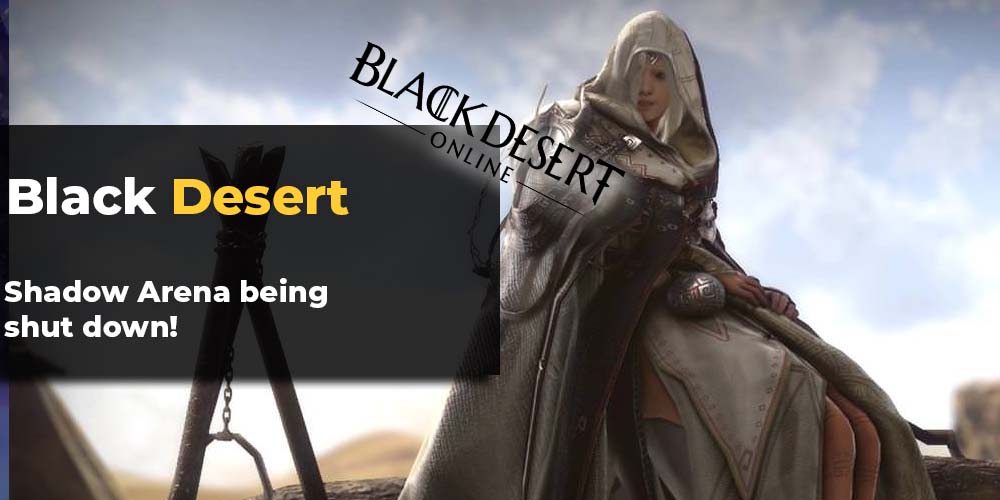 As in every battle royale game, there is one main rule: kill or be killed. It is no different for Black Desert Online: Shadow Arena as Pearl Abyss puts us into battleground filled with enemies who can scent the blood. Sounds fun right? Welp. Not anymore since Kakao Games closed that mode all of the sudden on the 10th of April.

Shadow Arena was released in late February 2019 as an addition to the already existing BDO game. Some people were skeptical about this idea since it is a battle royale mode. That is just enough for most people to shiver in disgust as we can see BR’s in every corner of the gaming streets. For others, it was an opportunity to try something new that brings a gust of fresh, blood-smelling, wind to their game.

It was for sure an enjoyable 50 people mode which allowed players to fight against each other on their road to become king of the hill. During gameplay, you would do typical BR stuff.

Starting as a black cloud (literally), players would wander around lands trying to possess one of the class bodies scattered through the map. After acquiring their mortal form, there was one goal in every player's mind - survival. With nothing but bare hands, they had to fight their way through enemies trying to find skills and equipment that could help them achieve victory. As collecting items from the monsters was a way for some of the players, others would rather spend their time lowering the “people alive” counter.

While it had its own flaws and was not perfect in any way Black Desert: Online Shadow Arena was certainly fun and the player base was happy with this little addition to their title. So why would Kakao Games close it?

Lifespan as short as an ant

On the 8th of April - 47 days after the Shadow Arena release, BDO Team gives players official statement which explains the reason behind their actions. In this article we can read that this addition to the game was widely acclaimed by the user base and during closing was in its peak popularity. There seems to be no logic to their actions because who would close content that is liked by players and brings profit to the developer?

Shadow Arena originally was released to be a constantly updated content allowing players not only to have fun for a specified amount of time but to keep it fresh for longer periods. Balancing character classes was taking a major amount of time from the development team which could not deliver updates to the core game in a regular fashion. This started raising concerns about the future of the game. Additionally, the team was involved in dealing with a great amount of 3rd party software users that came to the game. Since Battle Royale in Black Desert was a great way to make money hackers noticed an opportunity and started creating ways to achieve faster victories.

Trying to find the truth

As the Shadow Arena closed their gates to the Black Desert Online players the discussion has begun. What exactly was the main reason for this action and who develops new content just to delete it a little bit over a month later? I mean, this thing really worked. For sure not every user was happy about another BR but it still offered great rewards and many players enjoyed it. People started talking. Many think that you would have to be delusional to believe that they just want to relocate their workers to other projects.

If you decide to create an expansion to the game that will be constantly updated you assign a team to this project and hire additional programmers if needed. You take into consideration that people that you have to reassign from the other projects will not be working on the same thing anymore. That being said stating that the development team was deviating from its original direction to work towards this mode sounds like nonsense.

It is more likely that Shadow Arena is closing due to the hacker issue. The team didn’t want to or just couldn’t put their time into fighting 3rd party software users. If SA was meant as a fair mode where every player had an equal chance of achieving victory, fighting cheats would be the main priority. It is certain that in the online gaming industry a major part of the time has to be put into the fight against illegal software users. It is no different for this Battle Royale as since its release hackers have been working on gold makers. This is very sad to see that these days developers have to delete their own content because they can’t put a fight against dishonest users.

Was that a good decision?

The debate about this sudden event occurred as quickly as the decision was made. Players got divided into two groups - those who didn’t want this mode in the first place and those who can’t understand why closing this content is an only option.

The first group has its reasons. This Battle Royale was harmful to the main game as it brought the attention of the hackers to Black Desert Online. Furthermore, it split the user base into two groups - those who played the main game and those who were there only for BR.

Arguments of the second group make sense too as Kakao Games spent their time into making this mode a fun activity. Many players enjoyed it and the reward system was a great opportunity to gear up new players that have no chance to compete against veterans for grind spots.

So who is right? Will Black Desert Online Shadow Arena ever return? Was closing it a good decision? I guess only time has the answer to these questions.