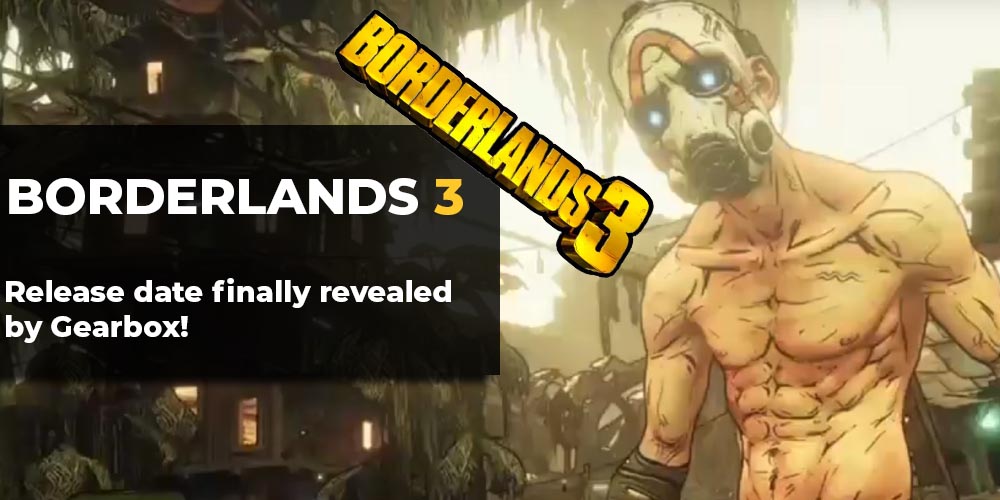 Great news has come to all the Vault Hunters. New installment of the best badass space western shooter franchise is getting closer. We know the Borderlands 3 release date – it’s September 13 2019. The long awaited continuation of the cherished series will be here in roughly five months on Windows, Xbox One and PlayStation 4 and we can’t wait to start playing!

Get ready to return on Pandora and visit some other worlds in one of the most action packed and entertaining game franchises out there! The trailers gave us some insight into heroes, villains and themes present in Borderlands 3. The series comes back from the dead and will live for a long time. The next game will come out seven years after the release of Borderlands 2 and five years from the Pre-Sequel. If we knwo naything about this franchise, we can epxect a huge mayhem, a lot of action and shooting as well as some new special memorable characters. Read this summary to find out all there is to know about Borderlands 3 and what to expect from the game!

Like all of its predecessors, the game is developed by Gearbox Software and will be published by 2K Games. PS4, Xbox One and PC users will be able to enjoy the new part of the story they know and love, but there are controversies bound to the Windows release. At the same time the game won't be released on Nintendo Switch.

It has been officially announced that there will be no Borderlands 3 on Steam, at least until April 2020. The game will be an Epic Game Store's exclusive, what caused something that can only be described as an outrage in the Steam community that started posting terrible reviews of the previous games. Recently the consoles users actually seem more peaceful than the PC gaming community.

What do we know about Borderlands 3?

But let’s put those platform wars aside and talk about some of the things that we know about the game itself. Trailers (a new one has been shown at PAX East) indicate the return of some of the characters we already know from the Borderlands series, but as usual the players will be able to choose the Vault Hunter they want to pilot, from some of the new original characters.

At the moment we know four of the good guys, but maybe the devs are still hiding something. They have already revealed Amara, FL4K, Moze and Zane.

Amara the Siren – another playable Siren is coming to Borderlands and this one’s playstyle will be substantially different from the others. Amara is strong and muscular, while also having an ability to use her Siren powers to conjure supernatural arms and use their fists to hit enemies. That will probably make her a close ranged bruiser, a completely new role for a Siren.

FL4K the Beastmaster – as their title suggests, huge part of FL4K’s combat power comes from their pet monsters. There will be at least three to choose from, a Spiderant, a Skag and a third unnamed gun-wielding creature. At the same time FL4K will use some guns and grenades to eliminate their enemies even faster.

Moze the Gunner – most important thing we know about her is that she will pilot a mech. All we’ve seen suggests that she will go right into the action inside the Iron Bear. We don’t know yet what her abilities will do and whether her skill tree will focus more on her own abilities or on the Iron Bear (or maybe both). But come on, she’s piloting a mech, what else do we really need?

Zane the Operative – he’s the character who's focused on different kinds of gadgets and gizmos. He will have a drone that will help with some airborne DPS. At the same time Zane will be able to deceive his enemies with a decoy. He’s supposed to be the assassin from the Borderlands 3 roster.

Villains or as the devs like to call them – baddies of the new game have also been revealed. The Calypso Twins will be the main antagonists. We don’t know yet what exactly their plan is, but for sure it’s nothing good and the Vault Hunters are going to stop them.

Tyreen and Troy Calypso are fancy looking, charismatic villains who build something of a cult around themselves. They’re gathering followers off of bandits, brainwashing them and promising them great power. It seems like manipulation is their greatest weapon. We can't wait to see what they're capable of!

There are lots of fan theories about them. One of the most popular ones is that they’re secret children of Handsome Jack. Of course nothing is confirmed yet, but the developers did a great job with teasing the community and capturing its imagination. Especially with showing the Handsome Jack's mask in one of the teasers.

The way in which the Calypsos build their power gives the game an entirely new flavor. Themes of religion and cult weren’t really prevalent in the previous installments of the series and judging from what we’ve seen, they look like a great fit. One of the most memorable visuals from the announcement trailer is the sign that says “Children of the Vault, give your flesh, take your guns”.

Especially with all the buzz created by the new cover art that’s widely discussed and shared on the Internet. It’s also the first time in history of the franchise, when a cover art doesn’t picture a psycho pretending to blow his brains out.

The reveal trailer also suggests that the action of Borderlands 3 will take place on multiple worlds. We have already got a taste of that in Borderlands: The Pre-Sequel that happens predominantly on Pandora’s moon called Elpis. Borderlands 3 should be even better, since being free to visit other planets will be an entirely new experience and we’re really interested to see what the devs prepared for us.

Moreover, trailers showed some of the characters from the previous Borderlands games (Brick had a great sax solo in one of them) and this interplanetary setting can advance some of their stories. Numerous characters originate from planets other than Pandora. Who knows maybe we will be able to see Mordecai’s home planet Artemis or visit Athenas, where Maya comes from?

Trailers also imply the return of many more people we interacted with in the previous games, including but not limited to: Ellie, Moxxi, Tiny Tina, Marcus, Patricia Tannis, Sir Hammerlock and of course, the one and only Claptrap, whom we can see showing off some fresh dancing moves, while dodging bullets.

Another thing that the trailers showcased was the fact that there will be a full billion guns that players will be able to loot. Seems like someone in Gearbox Software really likes big numbers, because that's a lot of weapons. It’s also worth noting that Borderlands 3 will be available in four different versions, that come with extra features.

The standard edition will be just the game, the Deluxe edition will have some cosmetic packs and XP and loot boosts. The Super Deluxe edition will include a season pass, which means 4 campaign DLC, some more cosmetics and a steelbook case. The last one is called Diamond Loot Chest Collector’s edition and it will contain the diamond loot chest replica, ten three-inch figurines, Sanctuary 3 snap model, some Vault Key keychains, the map of Borderlands galaxy and in addition - five lithographs with the introduced characters.

Get hyped about Borderlands 3

There’s a lot to be excited about for both PC and console users. Officiall announcement Borderlands 3 release date is a big deal for all the fans of the franchise. The marketing content also seems really nice and hypes up lots of players. They don’t reveal too much, but it is enough to know the characters, get a general idea about the themes and vibe of the game and most importantly to get excited about it. They also show some of the gameplay. Join the hype train and get ready to enter the war and shoot some bandits!

Finally, if you haven’t seen the latest trailers yet, you should definitely check them out. Especially watch official this Borderlands 3 trailer right here, because it's a glimpse that really sets up the expectations for Borderlands 3 release. Make sure to follow MMOAuctions blog and visit our site from time to time, any day of the week, to read more video game latest news and guides! If you're looking to buy some in-game digital goods for various online titles, you can find awesome deals at MMOAuctions! You can also earn some money by selling your own stuff!