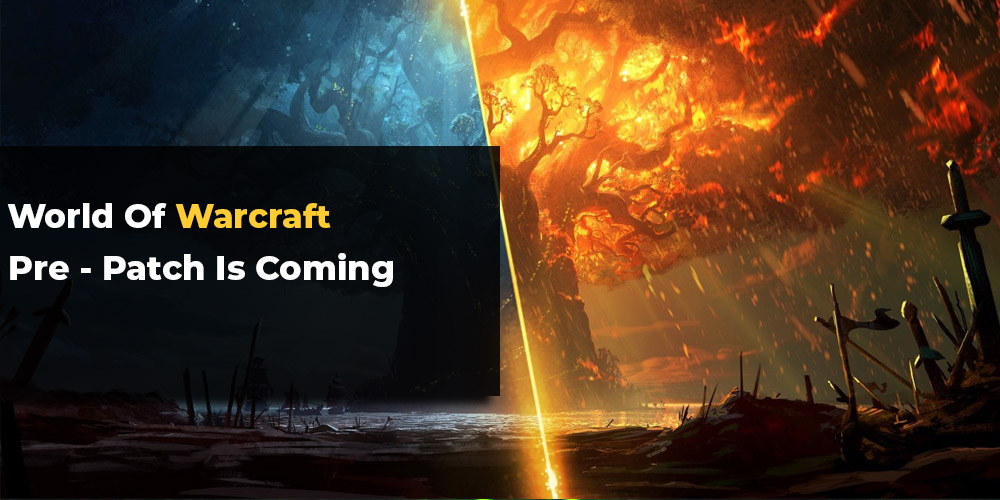 Pre-Expansion patch is going live on Wednesday. 8.0 will be an official end of the Legion expansion with some activities and achievements being no longer available. Pre-patch will also involve class changes, stat squish, Battle For Azeroth intro quests and much more.

There are still a few days left, so use them to get the most out of Legion! To help you with that we have prepared the list of the most important changes.

If you are into profession completionism, First Aid is going away for good in Battle for Azeroth and all associated achievements will be moved to Legacy Achievements section and will no longer be obtainable. So if you really want that Field Medic title, now is the time to get into bandaging.

7.3 elite pvp sets that you gain for reaching 2k rating in any form of ranked PVP will no longer be available, so if you want that gear and titles you should spend those few remaining days in the arena. Mage Tower challenge appearances for our artifact weapons will also be no longer obtainable. Remember, that our artifacts will still be available as transmog pieces, so getting all the appearances now is pretty important, especially those unobtainable after 8.0, if you are a druid and really want that badass form you better get to the Broken Shore and finish the Mage Tower challenge for your specs.

And the biggest change of them all - your artifact weapons will lose their power, dropping all perks and their unique skills becoming nothing than an expensive transmog piece. So prepare yourself a tissue box (yes, I'm talking to you shadow priests).

Ashran and Strand of the Ancients will also be gone so if you want any achievements from those battlegrounds this is the last call as those zones will be gone for good.

There are plenty of smaller things that will be gone in 8.0 like pet charms, but those things have little to none significance so we will skip them. There is enough to do already!

What will happen in World of Warcraft

It will be no spoiler to say that Burning of Teldrassil will be the main event of the patch, reigniting (pun intended) the long-forgotten core concept of the game: the war between Alliance and the Horde. You can expect to see horde invasion and burning of the sacred Night Elf world tree, and their capital, Teldrassil and following the Alliance retribution at gates of Lordaeron (Undercity). Awesome Warcraft scenario is not all you are getting tho, for completing the main quests revolving around the events of pre-patch, you will receive a faction-specific mount: War Bat for the Horde and Hippogryph for the Alliance

This content will be available to anybody who purchased Battle for Azeroth, and by purchasing it you will gain access to the entire event one week before Battle For Azeroth officially launches.

Once 8.0 will go live, personal loot will be the default and only mode of loot distribution, so no more free-for-all, round robin and master loot.

War Mode is another BfA feature that will go live in pre-patch. War Mode is basically a button that turns world-pvp on and off, while in this mode you will only encounter other players with War Mode, also you will gain 10% increased experience, honour, resources and world quest rewards. Having this on will also give you access to PVP talents to be used in the open world which, in case of some classes (*cough* Skyfury Totem *cough*) will make killing mobs easier.

Communities is another new thing in 8.0 and despite what Blizzard devs say, is implementing Discord to World of Warcraft. You will be able to join various channels and meet people from different servers that want to perform the same activities as you do. So expect every streamer to have his own community channel now. This will allow you to create your own network of people you want to play with which is awesome even for people with deep social anxiety.

As it comes to cosmetics your local Orgrimmar barber recently received surgeon degree and can fix Orc hunched posture into more proud upright one, also he can now perform eye surgery on Blood Elves giving them golden glowing eyes as a cosmetic choice. Shamans Fire and Earth elementals are getting a visual upgrade.

Item level and stat squish are also going live. Every few patches damage, health, resource numbers are just getting ridiculous, to counter that Blizzard is squishing numbers down by a lot, expect your character to have couple thousand health once it goes live. Same will go for item-level altho if you are Mythic+ geared you should be able to easily stick to your current gear up until level 115-116.

One of the major features of 8.0 is class changes. Every class will be reworked to bigger or smaller degree (for example Demonology Warlock is getting a total overhaul). Classes will gain (again) group-wide buffs like Arcane Intellect for Mages, Battle Shout for Warriors and Priest will gain back their Power Word: Fortitude, many of those buffs you will remember from vanilla. There are also new debuffs that only Monk and Demon Hunter can apply. Demons Hunter Chaos Brand will make all magic damage taken by the target increased by 5%, Mystic Touch will work the same but instead, it will work on physical damage. Furthermore, Demon Hunters will gain purge spell,  Mages can remove curses again, Hunters and Druids can once more use Soothe to dispell enrages. Every class will gain reworked talent tree to substitute for the loss of artifact weapon abilities. This should help with dungeons and raids.