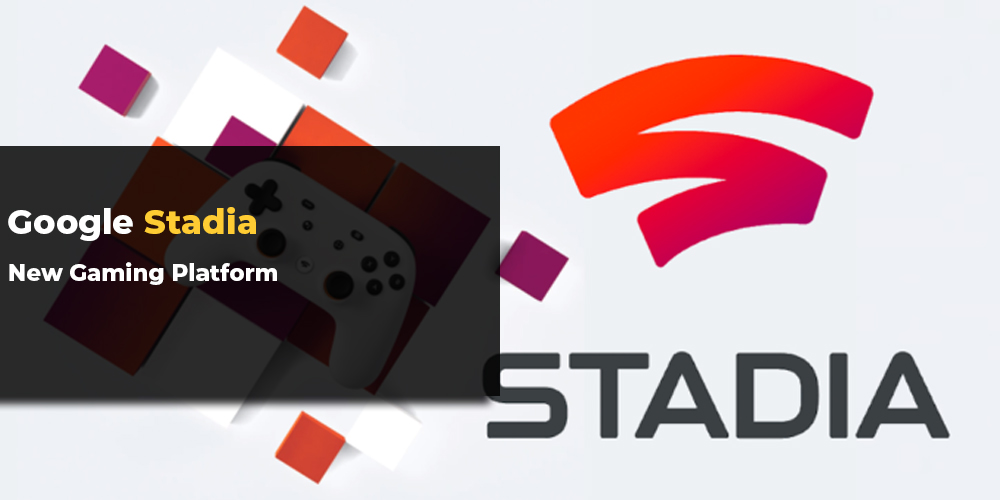 Get ready for a revolution in the world of gaming. Google Stadia release date has been announced. We also know the titles of some of the games that will be available since launch. Continue reading to find out everything there’s to know about Google Stadia. How will it work? How much will it cost? What games will be accessible there?

What is Google Stadia?

Stadia is the new proposition for gaming created by Google. It will allow its users to play the newest, most demanding video game titles, without the necessity to upgrade their PC or buy new consoles. All the necessary equipment is the Stadia Controller and a device with a screen, access to internet and ability to run Google Chrome (that includes TVs with Chromecast Ultra).

The games are running on the powerful Google servers in the data center and it’s streaming the game over the internet to your device. Then, with your Stadia Controller, you input your actions and they are transmitted to the data center. All of this without any latency whatsoever and with the possibility to play even the newest, most demanding titles with a great quality of graphics and sound.

The most important thing to understand, that the service isn’t about paying a subscription for an access to a vast library of games. It’s about the access to the computing power. The comfort of not having to worry about new consoles, new graphic cards, new processors et cetera.

You will still have to buy most of the games, but the subscription-users will have some discounts and an access to a limited library of games. At this moment the only confirmed one is Destiny 2, but presumably, some more will be announced before the launch. This library will also surely grow alongside Stadia’s user base and time on the market.

It will also provide a possibility of gaming for people who don’t even own a PC or a console. Instead of buying new Xbox or PlayStation, you will be able to use a small device called Chromecast Ultra that you can connect to your TV using a HDMI slot. You can set it up with a smartphone and you’re good to go.

Everything you need to use Google Stadia on your TV is Chromecast Ultra and the Stadia Controller. Both of those things are included in the Stadia Founder’s Edition.

The monthly subscription of Stadia Pro will cost $9.99. Alongside the access to limited library of games, it will also provide the service in 4K, 60 fps, with HDR graphics and 5.1 surrounding sound. There will also be a free version of the service, with limited 1080p resolution and lower sound quality. The free users will be able to buy games and use the computing power provided by Google, they won’t get the discounts nor the “free” library that the Stadia Pro users will have.

The aforementioned Stadia’s Founder Edition consists of the Stadia Controller, Chromecast Ultra and three months of prepaid Stadia Pro service for you and a friend that you can gift it to (they will need to get the devices though). The Founder’s Edition is already available in preorder for $129.00. It’s cheaper than the combined price of the controller and Chromecast Ultra and it costs significantly less than new Xbox One or PlayStation 4.

The service will be live in November 2019. As for know, the only game included in the subscription will be Destiny 2, but it might change over time. Of course, there will be possibility to buy other games since day one. In November 2019, the service will be launched in 14 countries: United States, Canada, United Kingdom, Ireland, France, Germany, Italy, Spain, Belgium, Netherlands, Denmark, Sweden, Norway and Finland.

At the same time, there’s some competition growing already. Microsoft already announced their xCloud service that they’re working on. Sony is talking about bringing PlayStation Now to another level and many people speculate that it might have something to do with the cloud gaming. With all the major players already interested, we might be in for a really fast and intensive ride straight into the cloud.

Alongside the Destiny 2 that’s included in the subscription, there’s already is a decent list of games that you’ll be able to buy on Stadia, from the moment it launches. Some of the titles are not available on any platform yet. Their Stadia release will be either very shortly after the release on other platforms, or like Baldur’s Gate 3 – simultaneous to the PC premiere.

Stadia has its own dedicated controller. It’s not necessary to use the service, but it makes some things – especially the streaming related ones, much more convenient. You can get it either as a part of the Founder’s Edition or buy it separately for $70. Design-wise is much less revolutionary than the whole cloud gaming venture. It’s an ergonomic and well crafted controller

It has some interesting features that are not visible at the first sight though. First of all, it can connect via Wi-Fi which will be compatible with the Google Home system. It’s supposed to decrease the latency issues that Bluetooth connected controllers might suffer from. You will also be able to charge and connect it, using USB-C port.

Another feature is a designated button for Google Assistant, that’s supposed to provide an easy way to find solutions when you’re in-game and you don’t have any idea what to do next. Instead of minimizing game, opening browser and typing what you need, you will be able to find the solution much faster with the Google Assistant. It will trigger the microphone that you can use to find what you need without typing. Google Assistant will be integrated into the service that’s running on extremely powerful machines in Google data center, so one can hope that it really accelerates some things.

Finally we come to the Capture button, which is probably the most interesting of the controller’s features. It will give the players ability to quickly clip some fragments of the game and either save them for themselves, share with their friends or with the whole world. Even the platform’s name is a plural version of the word “stadium” which suggests an emphasis on sharing the entertainment with other people and having fun together.

It’s also supposed to be extremely convenient for streamers and give them more options to engage their viewers. Of course Stadia will only support streaming on YouTube. It actually might be more of a competition for Twitch than for actual gaming platforms.

Since the whole idea is based on streaming the gameplay from Google data center to the players devices, it might actually be really good for the “traditional” streaming. Press one button and a copy of the stream that you’re getting will be available for your fans to watch live on YouTube. The concept definitely has some merit and we can’t wait to see it in action!

How to set up Google Stadia on TV

The idea of gaming with Stadia on your TV might seem like playing on a console, without a console. Setting it up might seem a bit overwhelming, especially for people who are not that into electronics. Check out this explanation and see that it’s actually really easy.

Then you can use an Android or iOS smartphone to finish up the process. If you already have Google Home set up, it will be super easy, if not get the Google Home application. After you open it, go into the Devices tab and find your Chromecast Ultra and click Set Up. Now just wait until it finishes the setup and rebooting.

The last thing is connecting your Stadia Controller. It connects straight to Google data center, it will be associated with your Stadia account instead of being connected to any specific device you’re gaming on at a certain time. You can do it with the dedicated mobile app.

As we already mentioned, Google is not the only industry giant that’s looking at the cloud gaming as a next direction of development. Cloud gaming, based on using the computing power of huge data centers and streaming game through the internet to players’ homes might be the future.

The extra tools that it provides streamers are really promising too. Ability to easily clip the fragments of gameplay, engage with the audience even more and invite viewers to play the game might provide even bigger incentive for game studios to create partnerships with the streamers and make the streaming market grow even faster. It’s also a great way for casual players to enjoy gaming with their friends and easily send each other the clips.

Many have already tried to dethrone Twitch, or at least compete with this streaming giant, with very limited success. Now it seems like somebody is finally coming in with a significant advantage and is actually trying to use it.

The other interesting part of this discussion is the technology. The idea seems really great on paper, but will they be able to execute it flawlessly? Every gamer that played online games has experienced lag or latency issues. There’s some justifiable skepticism around this concept.

Even if Google somehow manages to keep everything running smoothly, what about the internet providers? How many of them will be actually able to provide connection that’s stable enough and avoids all the problems with latency and packet loss? If those issues are not resolved, they will haunt the players even in the single-player games. Struggling in a platform or arcade game due to latency issues doesn’t exactly sound like the most fun in the world.

That being said, all the biggest companies are pouring millions of dollars into this cloud gaming concept. This has to mean that there is a way to make it work on a satisfying level. A lot of our questions will soon be answered. We have to just wait till November and we’ll see how everything turns out.

What do you think about Google Stadia and the whole concept of cloud gaming? Let us know in the comments!