Lineage 2 Classic Adena Farming Guide - How to Get Rich in L2 Classic? 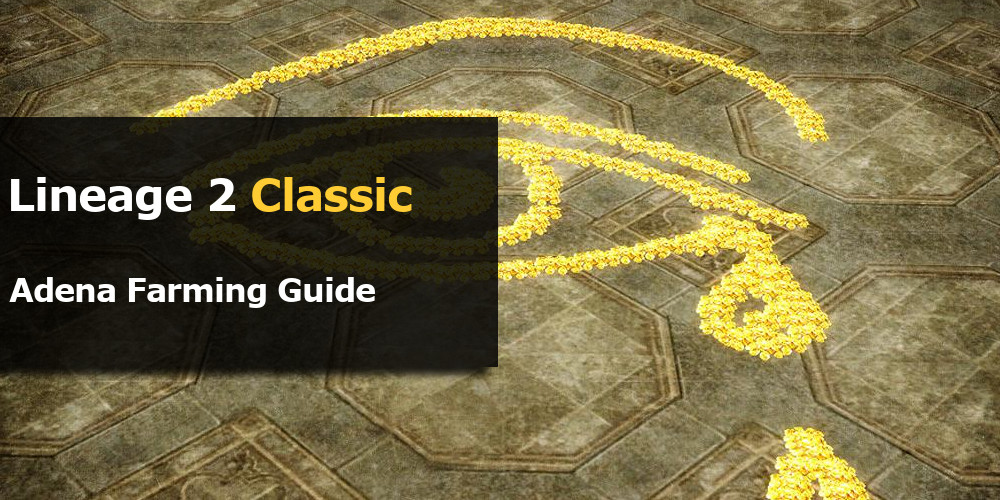 Getting enough Adena to buy all the items you need, can be a tough task in Lineage 2. Especially as NCSoft keeps adding new item grades to the game and finds new ways of endgame progression for the players. Even the characters that are maxed out and rich in one patch can struggle to upgrade all their gear in the next one. Getting the desired equipment is even harder for new players. Lineage 2 economy is strongly player based and that always means that with some wits and persistence you will be able to reap the rewards. Read about Lineage 2 Adena Farming in details.

It’s important to note that there are two classes in Lineage 2 Classic whose gameplay is entirely focused on the economy. Of course, we’re talking about Dwarves and the professions that they can master: bounty hunter and warsmith. One of them has the ability to get extra loot from killed monsters and the other one can craft various items using recipes and materials. Both those methods haev reasonably low cost, but you're going to have to put i nsoem hours to really get rich.

The truth is that to make the most Adena you’re going to need access to both of those classes. Whether you decide to level them both by yourself (which would take the most time) or share some of the responsibilities with your friends or clan, having both of their skillsets available will significantly improve your economy. Let's take a look at some of the top suggested strategies to farm Adena in L2. They won't make you rich in a couple minutes, but they can for sure save you some time.

The character in this development line is often called “spoiler”, because of one of their class-defining abilities. It’s a spell they have to cast on a monster before killing it, to get access to the extra loot which is one of the main reasons why people even play this class.

Spoilers are the only characters in the game that can access those items, so if you don’t have one in your party while farming, you simply miss out on them. The spoils are predominantly materials, but you will sometimes get a recipe or even a whole piece of equipment. Farming with a spoiler in your party will make you fill your inventory much quicker, due to the extra valuable drops.

Compared to crafters, spoilers’ biggest drawback is the fact that they need someone to pilot them at all times. To make money you have to fight and kill monsters, which means that you’re going to leech some experience off of other party members. At the same time, you need the experience to spoil efficiently at higher lvl locations, so it’s not that bad. It's definitely worth to pay that price in order to to get the materials necessary to gear up.

If you want to make the most out of spoiling, you have to follow the market. Look what materials are the most popular and profitable at the moment and keep that in mind while choosing a location. It’s especially good when there are multiple monsters that all can loot some valuable materials. If you’re using the bounty hunter to collect materials for specific recipes, you should obviously prioritize them over anything else.

Spoilers are not the most useful combat characters, with their unimpressive damage output and inability to be a true tank, but that might a blessing in disguise. You won’t rely on their combat stats, so you don’t have to worry that much about gear. Dress them in some leftover light or heavy armor and give them any melee weapon you want. They have some synergy with daggers, polearms, and blunts, but you can give them anything.

If you don’t have a clan or group of friends, you should still easily be able to find a party as a spoiler. You will share your extra loot with them and they will offer their buffs or DPS. It’s not that bad of an option, especially if your main goal is to get your bounty hunter to a certain level.

The best situation is to collect materials and recipes, to later craft desired items on your warsmith, but if you or your clan don’t have one, you still have some good options. Selling your materials and in-demand recipes to other players is a decent idea (they will often offer you better prices than NPC stores). Another thing you can do is crafting necessary items at other players’ private workshops. They will charge you a fee, but in the end, you’ll be able to create the item you want.

The other Dwarven class is often simply called a crafter. Unlike spoilers, you don’t have to drag them along to battle to make money. Just remember, that you will have to get some levels under your warsmith’s belt to get the ability to craft higher grade items, you need points in your

The most important things necessary to make money as the crafter are recipes. You’re going to need them to either craft the items that you’re later going to sell, or to open your private workshop.

The private workshops are the main source of income for crafters. You choose what items you want to craft and set up a fee. Other players can then bring their own materials and use your character as crafting station. If you pick highly demanded items as well as set competitive prices, you can make a lot of money, while being AFK, it's not that much work at all.

To make money as a spoiler you’re going to need some luck (there’s a lot of RNG involved in it) and effort, because you have to actually pilot your character and use Spoil and Sweeper while farming. As a crafter all you have to do is to log in, set up your workshop in Giran or other big city and you don’t even have to play as this character.

Warsmith’s income is more stable on a daily basis and less labor intensive, but a lucky bounty hunter can make more Adena in a shorter time. It’s important to note, that there’s some fortune in crafting too. To create S-grade and higher grade items, you’re going to have to use

recipes with only 60% or 70% chance of success. This means that there will be situations when you farm materials for a specific recipe to later fail the crafting process and get only get some crystals instead of that sweet dagger.

By the way, as Blacksmith you’re going to have access to some unique servitors - golems, one of them being a

standard pet for solo farming, another one being able to

self-destruct and deal AoE damage and some others that are

giant machines used during a fortress siege – another reason why every ambitious clan needs a crafter.

Lineage 2 offers a whole race of characters dedicated specifically to making Adena. Using both of them is a great idea to optimize your income. Having a crafter’s private workshop set up during your downtime will give you some low effort constant economy boost. Making sure you always have a spoiler in your farming party and choosing good locations to make the most out of their kit will also provide you with some valuable items. As we mentioned earlier, you can get the best effects if you combine the two of these classes.

Getting Adena fast doesn't have to mean leveling new characters. You can spend some money and buy Lineage 2 Adena or L2 Classic Adena at MMOAuctions. Sign up, join our community and start trading with other players.

If you're intrested in more of the general tips and guides, news, build guides or other content for Lineage 2 and basically any other MMORPG, make sure to visit our webiste every couple of days and check our blog for new posts.