Lineage 2 Skills - All You Need to Know About L2 Skills 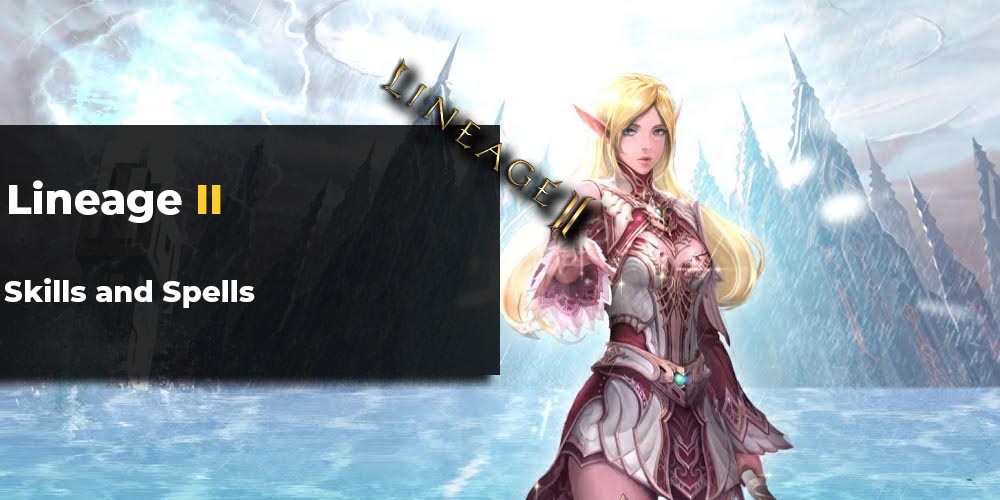 There are over 30 classes in Lineage 2 Classic and each one of them has numerous abilities that together create a unique skill set. This might be a little difficult to comprehend for some of the newer players. Read this guide if you're interested in an overview and help you understand different types of Lineage 2 skills and show you some of the most important ones for different classes.

Passive skills – they’re in use all the time, passively increasing your statistics. They’re often linked with a certain category of weapons or armor.

Active skills – abilities that you can use at a chosen time, there’s usually a cost attached to using them. In most cases, it will be mana, but it also can be health or some items.

For other characters with this passive (Warrior, Raider, Scavenger, Artisan, Warlord, Gladiator, Destroyer, Bounty Hunter, and Warsmith) the bonus p. def. is smaller and they don’t get the critical damage reduction.

The other characters with that skill don’t have the last bonus at all. Meanwhile, summoners and supports get extra casting speed and MP recovery with this. At the same time, Kamaels (Trooper, Warder, Berserker, Soul Breaker, Arbalester and Inspector) have a passive with the same name but a different icon and Ertheias have an Eminent Light Armor Mastery to make it even more confusing.

The different values between the roles can serve as a tool for NCSoft to make some balance changes in the game, but at the same time, it can get confusing. The passive abilities are usually really important because they just flat out make your character stronger. Some of them might be unnecessary if you’re not going to use a specific weapon or armor type, but other than that, they’re really good. Weapon masteries can be general for all types of weapons (mage classes usually have those), but they can also work with specific weapon type, like dual swords, blunts or plenty others.

Now let’s take a look at some of the most important active L2 skills.

Crowd control – this is really simple, hard crowd control skills are really important and strong in PvP. If you have a possibility to stun or root your enemies as well as put them to sleep or inflict fear onto them, then you should always have it available and use it as necessary. In Lineage II there also are abilities that can paralyze your enemy or silence them, which prevents them from casting spells. Some of the examples of those abilities are:

Sleep – immobilizes enemy until they’re hit with a spell or an attack, a lot of mages can use it

Anchor – completely paralyzes the target, only Necromancer and later Soultaker has access to it

Silence – prevents the target from using magic, Necromancer, and Spellhowlers can use it

Soul Shock – exclusive for Arbalester, requires a crossbow and inflicts fear onto the target

Taunts are special crowd control abilities. Instead of impairing the enemy’s movement, they force them to attack the user. These skills are mostly available to tanks and are necessary for tanking in big PvE parties and during raids, to make sure the monsters won’t switch targets. They are also useful in big scale PvP to make enemy damage dealers attack the tank instead of the priority targets. Two basic taunts are:

Most classes have some skills focused on dealing damage. Here we’re going to talk about two roles that have to deal as much damage as possible.

Nukers focus to deal as much damage per second with their magic spells. The most basic nuker rotation consists of lowering the target’s resistance and spamming the highest damage spell. For Sorcerer and Archmage, it will be Surrender to Fire and Prominence. Spellsinger and Mystic Muse will cast Surrender to Water and Hydro Blast. Spellhowler and Storm Screamer will use Surrender to Wind and Hurricane.

Daggers use their damage skills to attack the enemy vital organs. They have the potential to kill single targets really fast, but there’s some randomness involved because there’s a chance of failing those attacks.

Backstab – the damage skill that can’t land when attacking upfront, you have to hit the enemy in the back to increase the success chance

Blinding Blow - weaker damage skill, but has a chance to make the enemy turn their back toward the user. Synergy with Backstab should be obvious

Buffs are necessary to accelerate farming, enable killing Raid Bosses or simply making your allies stronger in PvP. They increase certain statistics of your team members. The basic buffs last 20 minutes, some of the stronger, advanced ones last 5 minutes, dances and songs time out after two minutes. Some of the Inspector and Judicator buffs last only 15 seconds.

The standard supports can only buff one person at once. Bladedancer, Sword Singer and Warcryer can buff their whole party. Overlord has the ability to cast his Pa’agrio buffs on all the nearby clan members. We’re not going to talk about the most basic buffs like Might or Empower, but let’s take a look at some higher level, advanced ones.

Prophecy of Fire – Hierpohant buff that increases some important stats for basically every character, but decreases movement speed

Chant of Victory – Doomcryer buff for the whole party, basically the same effect that Prophecy of Fire has

Every summoner and a few other classes (Necromancer, Dark Avenger and Warsmith) have access to summoning servitors. You can control and micromanage them to an extent. Each of them looks different and most of them have some unique abilities. A few examples are:

Summon Dark Panther – Dark Avenger is the only tank with access to a servitor, it makes solo farming easier and gives them more power in PvP

There are many more interesting mechanics in some more unique skills, like Gladiator’s and Tyrant’s Momentum, Tyrant’s Totems, Berserker’s Disarm, Destroyer’s Frenzy and much more. This is just a beginner’s guide that explains some of the standard and more common skills mechanics in Lineage 2. If you want more specific information look for guides regarding specific classes. Don't forget to write a comment and tell us what kind of guide would you like to see next.

Why you should play Lineage 2 classic

Lineage II is a 2003 Korean MMORPG. In the L2 Classic version, players can play one of six races: Human, Elf, Dark Elf, Orc, Dwarf and Kamael. There's a ton of progression to do in the game. At first the players choose their race and whether want to create a fighter or a mystic character, male or female and some of their appearance features. At level 20 players have to complete the first class transfer. Some of their possibilities at that point of the game are: human knight, rogue, orc raider, warrior and assassin. Players can pick from different races, classes and item choices to play the way they like the most.

After hitting level 40 they have to make probably their most important choice during the game - complete the second class transfer and define their development path. All the later main class progression is predefined by this choice.

At level 76 you unlock S-Grade weapons and you can complete a quest in order to advance into a third class. Some of them are: Adventurer, Trickster, Cardinal, Titan, Dominator, Doombringer, Duelist, Dreadnought, Arcana Lord, Hierophant, Maestro and Fortune Seeker.

Some of the other options in character progression is creating subclasses. Subclass allows the player to have other classes and skill sets while playing the same character. Furthermore you can empower your weapons with special abilities using soul crystals what will make you gather experience and Adena even faster. Enchanting your items with special scrolls is another activity that will make you grow in power.

Players can form clans and participate in castle sieges, fight tremendous Raid Bosses, take part in a clan war and fight in the Olympiad. There's a lot of interesting endgame content in Lineage 2 Classic, everybody can find something for themselves. Getting to the endgame will be quite a challenge though.

For more texts about Lineage 2 and other online games, make sure to join our community and follow this website! Check with us from time to time and you'll surely find something worth your while!