Lineage 2 Classic Quest Guide - Quests Worth Doing in the Earlygame! 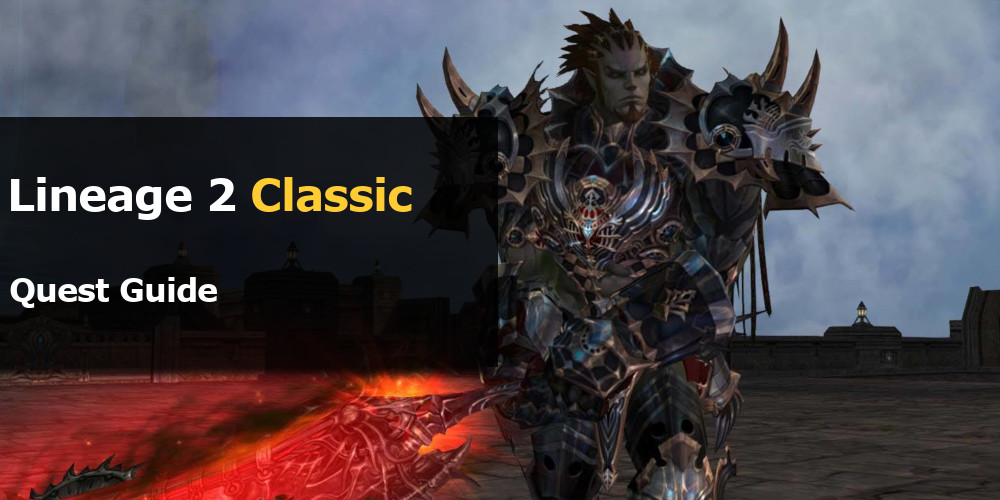 Lineage 2 Classic is not the most beginner-friendly MMORPG out there. Some of the new players might even feel lost with how little direction they get at the start. Of course, this can be viewed as a positive. After all Lineage 2 Classic is all about that old school MMO experience. Holding new players’ hands for too long would work against this idea. Most sources of game knowledge are based on the experience of other players and to find them, you have to look for them in the Internet by yourself. If you need to learn some tips about Lineage 2 Classic quest, you’re in the right place.

Firstly, it’s important to note that progression in L2 Classic is much less reliant on quests than in some of the newer titles. We’re talking about an old school massively multiplayer role-playing game and this means lots of grinding.

The most important quests in Lineage II are the ones associated with class transfers, but we’re going to talk about them later. While the questing aspect of the game might not be the most important, there still are a few of good and useful ones that you can do to make your early game easier. Questing in L2 Classic is pretty standard, but it can be fun if you enjoy this kind of old-school playstyle. That being said, let's jump in.

Okay, this is the only part where the game actually holds your hand. After creating your character you will find yourself next to the village of the race you chose. Close to you, there will be a NPC called Newbie Guide. After you hit lvl 2, you will be able to get your first real quest from them. Make sure that you don’t skip this quest because the rewards are quite useful. You can get 70k Adena, some novice jewelry and a novice weapon.

Quests by themselves won’t often offer really overpowered rewards, especially looking at experience or Adena. That’s why, with choosing which quests to complete, you should look at two things. First one is gear. You're probably not going to be able to afford to wear the top armor and weapons at all points of the game. If finishing a quest will provide with some items that will be an upgrade over your current equipment, then go for it.

Quests that provide you with gear

The best example of that are the race-specific level 11 quests that can provide you with decent no grade armor as well as some Soulshots or Spiritshots, getting a nice item or two will make your early gaming much easier. They all require having the Newbie Guide quest completed, which is just another reason to actually to do it as soon as possible. Those quests for respective races are:

After completing one of those quests, you will get access to more race-specific quests. These ones are divided in three parts and can reward you with some valuable consumables as well as experience and skill points. They are respectively:

All those race-exclusive quests are available in the starting villages. We recommend staying there and farming nearby areas until you unlock and complete those quests. After all Gatekeepers will charge you for teleporting from town to town and you want to avoid any extra costs.

The other kind of quests worth taking are the ones focused on grinding in a specific location, if you were already going to farm there. This is a way to optimize your time spent in the game. While killing monsters is the main source of your experience, you’re able to get some extra rewards from completing quests at the same time! That's some easy money you can make in some zones.

Some examples of that are the Orc quest Invaders of the Holy Land, that grants additional rewards for killing Imps near Orc Village or the Elven quest Orc Hunting that allows you to make some bonus Adena while killing Kaboo Orcs next to Elven Village.

Not all of them are exclusive to a single race, the 15 level Grim Collector quest available in Gludio grants extra rewards for killing skeletons and zombies in Ruins of Agony or Ruins of Despair, two of the best locations for hunting mobs and grinding experience around this level. This quest literally gives you extra Adena for every monster you kill, next to all the items they drop anyway.

There also many other great quests for various levels based on identical principle, we’re not going talk about all of them here. In general, you should form a habit of checking whether the location you’re going to grind in, has any of those hunt quests. Even getting a small extra influx of Adena can prove extremely useful, when you’re going to upgrade your gear at later levels. Of course there's nothing wrong with skipping those quests, but there's no reason not to get the additional money.

Level 20 is an important threshold in Lineage 2. This is when you’re going to carry out your first class transfer which will give you extra skills and better stats. To do that, you have to complete a specific quest. If you already decided your character’s development path then just go to the proper NPC and take the right quest. Most of them are located in Gludio or Gludin, but there are a few exceptions. If you don’t know what class you’re going to play yet, make sure to check out our Classes Guide.

At level 25 you will get access to the Moon Knight quest. The reward for completing it is a full D-Grade armor set of choice – you can pick heavy armor, light armor or robe. You can accept it in Gludin from Moon Knight Jones. The quest’s structure is a little bit annoying, because it requires you to go hunting Ol Mahum Thiefs, come back to Gludin and talk to some NPCs, then you have to kill Turek Orc Commanders and go back to the town again, finally you have to hunt Turek Orc Invaders and collect the reward.

We heavily recommend doing this quest if you don’t have D-Grade equipment from your previous characters or from your clan. Moon armors are not the most powerful sets in this tier, but they’re still better than No-Grade and you can equip them right away.

Beyond that you can keep looking for some hunting quests, but it’s mostly grinding now. At level 35 you can start completing your special second class transfer quests. You will have to do three of them, they’re unlocked at levels 35, 37 and 39, but to complete the class transfer you’re going to need level 40.

Those quests are required to get your very important second class, but they also offer some decent exp rewards what makes them even more valuable. Each class has different quests with different starting location. There is a pattern in their names, the first ones always start with “Trial of…” the second ones with “Testimony of…” and the third ones are called “Test of…”. To complete them you're going to have to visit some new towns, like Giran, Oren, Aden and some others.

While quests can provide you with decent earlygame equipment and some extra Adena, they definitely won’t solve all the problems that new players might encounter. It’s important to use the quests for an early boost, there are some other, arguably more important things to look at. Of course you can also do some other quests, we only suggested the ones that we believe can help you in the earlygame.

Quests are not everything

Lineage 2, especially in the Classic variation is a game heavily based on cooperation and interacting with other players. I'm sure every L2 player from back in the day will know that. We strongly recommend finding a clan (and an alliance) as soon as possible and always trying to farm in parties. The old school, repetitive MMORPG gameplay is the core aspect of this game's identity. There were some changes from the real early days of Lineage 2, but the general idea remained.

Grinding as a group is not only more efficient (the game offers an experience boost for parties), but also quicker and simply more enjoyable. Trying to play Lineage 2 as a solo game is a really bad idea because that’s simply the opposite of what the game is about.

By joining clans on an early level you’re not only increasing the possibility of finding a reliable party members to farm with, but there’s also the potential of getting some help with gearing up. In the later levels, you’re going to need other people to experience some of the most interesting content that Lineage 2 has to offer.

As we already stated, questing in L2 Classic is not as important as in many other MMORPGs. The only incredibly important quests before level 40 are the ones required for class transfers. The rest can be used to slightly increase your income, or to get some useful gear and consumables.

Keep in mind that there are no main story quests or anything like that in Lineage2 Classic. The game doesn't lead its players through a single path. It is much more about slow progression through both experience and items as well as players’ freedom to do whatever they want from grinding, through Raid Bosses (some of them are really low level) to open world PvP.

If you're interested in more materials about Lineage 2 Classic and other top MMORPGs - subscription based and free, make sure to follow our website and check this blog from time to time to see what texts are being published.