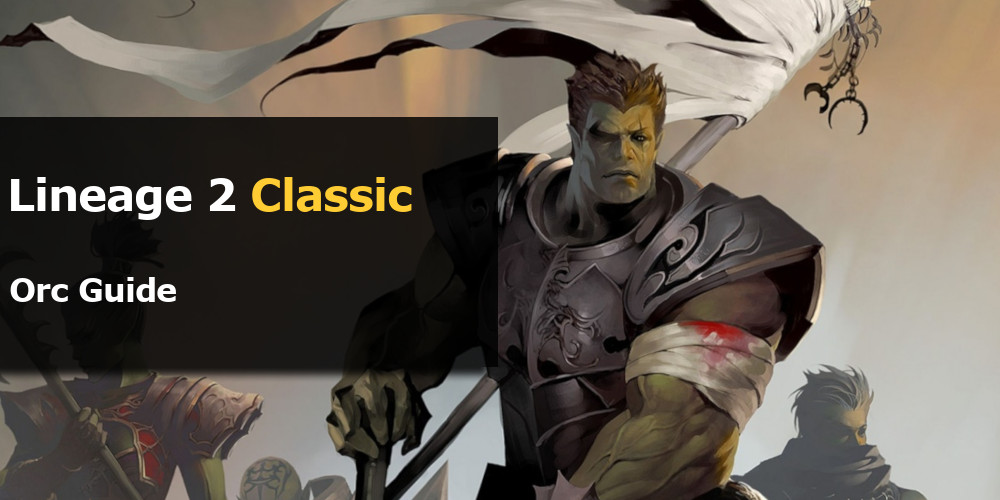 Lineage 2 Orc is a race of strong and durable warriors as well as supportive and versatile shamans. They have been a part of the game from its first days, as one of the core classes alongside Human, Elf, Dark Elf and Dwarf. According to lore Orcs are the race of fire and they worship Pa’agrio, the God of Fire. Read the content of this Lineage 2 Orc Guide to learn about the play style and characteristics of different Orc classes and get some tips.

Orcs as a race have the highest Constitution (CON) what gives them the most HP in the game and the highest Mental (MEN) what results in high mana pool and strong debuff and magic resistance. They also have decent Strength and Intelligence, what allows them to deal a lot of physical and magic damage. Their weaknesses are Dexterity (DEX) and Wit (WIT) what makes their movement speed, attack speed and casting speed rather slow. Orcs posses greatest physical strength with high maximum HP and MP levels, as well as the recovery, but slow movement, attack and casting speeds.

While the total of four classes to choose is definitely not the largest number in Lineage 2, Orcs have some really interesting choices to make. As with most of the Lineage II races, the first one waits for you during the character creation process. You have to decide whether you want to pilot play as a fighter or a mystic.

The basic melee fighting class, all you get at that point are damage abilities for fist weapons and for sword and blunt weapons. There’s nothing interesting happening yet, besides the fact that you have the highest HP bar amongst the early level characters.

Orc mages get some more identity form the beginning. Even before the level 20 they get some damage over time spells, curses, a life steal spell and some buffs. Those and similar abilities will continue to be the core of your playstyle later on.

At this point of the game, after hitting level 20 the Orc Fighters have to make their final decision regarding their final class, every transfer after that becomes linear. Mystics have some more time to make up their mind, because now they can only become Orc Shamans and they will choose their final path at level 40.

Orc Raider is the more tanky, heavy armored warrior choice. After this class transfer you’ll get access to Two-Handed Weapon Mastery and Polearm Mastery, directing you towards the right weapon choice. You will also get some passive HP increase and a self heal, as well as a stun for blunt weapon. Finally, at level 24 and 32, you will be able to learn some very important self buffs.

Monk and later tyrant is a more agility focused quick fighter class. At this point you will get some passive skills which will give you bonuses to accuracy and movement speed, when wearing light armor, you will also get access to Fist Weapon Mastery and a stun and a slow for this type of weapon. This development path is as close as Orcs get to a rogue class category.

You will also passively increase attack speed and get access to skills based on Momentum. You can charge it with Focus Force and then use a ranged Force Blaster or melee Hurricane Assault. Furthermore, you will be able to use totems – special abilities that are self-buffs unique for monks and tyrants, you can only have one of them active at a time.

This class is just a continuation of Orc Mystic skill set. You still can drain life from your enemies, cast debuffs and damage over time spells. Only new things are stun for a blunt weapon and some first chants that you can cast on your whole party and Pa’agrio buffs that can increase the power of all your nearby clan members.

At this point raiders can only become destroyers and monks have to advance into tyrants. Orc Shaman will have a choice between party buffing warcryer with damage over time and clan buffing overlord with more curses and debuffs.

This is just a better version of raider. You continue to get levels in your weapon and armor masteries, you get a better blunt stun in Hammer Crush and stronger damage skills in Fatal Strike and later Crush of Doom. Destroyers are also the proud owners of the title of the highest base HP character in Lineage 2.

You also can level up Rage and Frenzy as well getting some other important skills:

Destroyers are good for farming solo and in small groups, they can use polearms AoE basic attacks to kill multiple melee monsters at the same time. They are very tanky and deal a lot of damage, but can’t keep the monsters focusing them, because of the lack of taunt. Their best gear setup is to wear a heavy armor set with two-handed sword for damage dealing and a blunt weapon, exclusively for stunning enemies.

Their PvP efficiency is situational, but a destroyer can start crushing enemy backline if he doesn’t get bursted after activating buffs. They can be very useful during raids, first letting the boss get them below the threshold and then activating buffs and dealing a huge amount of damage in this window of time.

Destroyer can advance into Titan as the third class.

Tyrant is the next step of monk’s development path. Item wise they continue to specialize in light armor and fist weapons, while getting even more attack speed steroids. They get access to Soul Breaker – a new fist stun and some more skills for this weapon type, both standard and Momentum based. They can also use Rush and Zealot and at the same time, they get more totems to choose from.

Tyrants are powerful melee DPS characters, most efficient at using their fists to kill single targets. They are very strong in duels and small scale PvP. The same goes for farming, they can do it really efficiently solo and in small groups, but they lack AoE damage for huge trains of monsters. Tyrant can move very fast through the battle, what makes them hard to kite. Tyrant at level 76 can turn into Grand Khavatari.

This is the better choice of an Orc mage for new players. Warcryer’s chants affect their whole party, while overlords can buff their clan members. Let’s face it, as a new player you have no guarantee that you’ll be able to exp with your clan at all times. Forming party is easy, you can do it with bunch of random people and it shouldn’t be hard to find, because everyone loves getting buffed.

At the same time you still have access to strong life drain in Steal Essence and a powerful damage over time spell in Freezing Flame, what makes solo farming a viable option. In general your chants suit physical damage dealers a little bit more than nukers, because you lack a magic attack buff.

Warcryers are obviously great for big parties, but at the same time their surprisingly good  in small scale PvP. At level 76 you turn into Doomcryer and two levels later get a powerful buff called Chant of Victory.

As we already mentioned, overlords can buff all their nearby clan members. They also have a little more synergy with mages. At the same time they offer many powerful AoE curses. They are more difficult to level up than warcryers, but they are extremely powerful in the end game PvP, especially clan versus clan.

Some of your most important debuffs are:

At level 76 an overlord can become a Dominator and get even more powerful buffs and curses.

While currently there are only four classes to choose your main from, Orcs have some of the most interesting possibilities in Lineage 2. They all retain their identity as the strong and bulky warriors and shamans (even their mages are surprisingly hard to kill), but every class has its own unique features.

Heavy armored destroyers are great for farming with polearms or killing raid bosses with two-handed swords. They can also completely turn a PvP fight with their tankiness and situational high damage output. Tyrants are powerful single target damage dealers and duelists, they move and hit a lot faster than destroyers. Warcryers are great for every party, thanks to their buffs, utility and decent damage output. Meanwhile overlords can show their full potential in endgame big scale PvP, supporting their whole clan and inflicting curses and debuffs on multiple enemies.

They aren't the most popular race in the game, but there's still plenty of them if you take a walk around Giran or Aden. Besides, with how easy it is now to get a subclass, the race choice is only the matter of looks and Olympiad. You can easily role-play as a nuker like Sorcerer or full-tank like Temple Knight and still be an Orc thanks to the subclass system, all you need is some Adena to gear up. Use all the tools and features that the game has to offer in its latest updates - both the system changes and new locations, to enjoy Lineage 2 even more.

If you're intrested in some other Lineage2 races like Dark Elves or Kamael, or other texts related to top MMORPGs, make sure to browse through our site and read our other guides.