Lineage 2 Classic Kamael Guide - All About the New Race 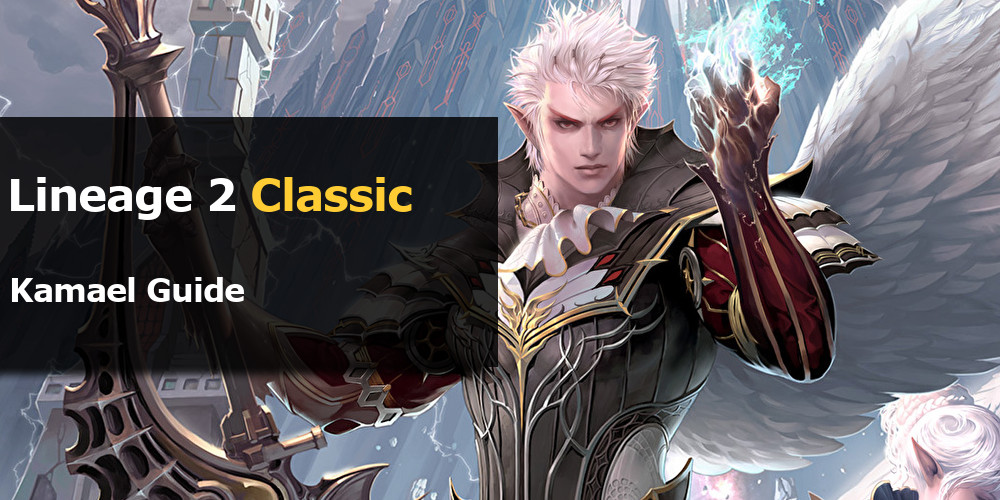 Lineage 2 Kamael is the sixth playable race introduced by NCSoft to the game. They are also the first one that was not in the game since the beginning and got added later. The roster of playable Lineage 2 Classic races at the moment is: Human, Elf, Dark Elf, Orc, Dwarf and Kamael. Similarly to Dwarves, Kamaels can’t be created as mystics.

According to lore, many years ago Kamaels have been created by the Giants to be their living weapon to combat Gods. Their history is rather tragic. After Giants lost the war, Kamaels got isolated from the rest of the world and sealed on the Isle of Souls. Later they have been released back to Aden to help other races in the fight against the evil forces and now they are free. The original purpose of their existence was to fight, what is the reason that they’re the most warfare-themed race in the entire game. Their unique play style and design quickly made them extremely popular in the players community.

Kamaels absorb souls of their enemies to further empower their own abilities, somewhat similar to the Momentum mechanics that gladiator and tyrant use. At the moment they are the only race in the game that has gender unique classes. They also have distinctive, race exclusive weapon types. Kamaels can transform one-handed swords into rapiers, bows into crossbows and two-handed swords into ancient swords. Let's take a look at an overview and some guidelines regarding L2 Kamael classes.

While you create your character, you have to choose your character’s gender. Unlike any other Lineage 2 races, this choice will affect your gameplay and development paths available for you. All options are fighter classes. During the levels 1-20, the differences are almost non-existent. Men get a self physical attack buff, while women can detect and disarm traps. Both of them get weapon and armor masteries, the ability to collect souls, increased magic resistance and some damage abilities. Later in the game males are stronger melee fighters and females are more geared towards ranged combat.

At this moment there are no choices to make, they were already made at the start. There’s one path for female Kamaels and another direction for males.

Warder is the next step in the female soldier’s progression. The warders can’ weapon of choice is either crossbow or rapier. They get masteries of both of those weapon types as well as light armor. Warders also have access to some damage skills for rapiers and crossbows and a fear for the latter called

Soul Shock. Another thing they can do is using dark magic on their enemies and placing traps. Some other important things are

Ultimate Escape to increase your speed and evasion for a short time,

Dark Blade that increases your damage output and

Male soldiers can advance into troopers, who are an entirely melee focused class. They can use rapiers or ancient swords and wear light armor sets. They also have access to dark magic as well as physical attack and movement speed self-buffs. Moreover, they can reflect some of the damage they take and disable enemy weapon with

At this point (level 40) you’re going to make the most important choice in your character’s development. Another special aspect of Kamaels is the fact that both warder and trooper can advance in the same class – the rapier-wielding soul breaker. At the same time, warders can also choose to become arbalesters and specialize in ranged damage dealing with a crossbow. Troopers, however, can become berserkers and fight with ancient swords.

This is the only class available for both male and female Kamael soldiers. They fight using rapiers and have access to dark magic, but their main point of power is melee damage dealing based on critical hits, this aspect is amplified by

Critical Sense. To deal damage most efficiently soul breaker should open up with

Death Mark and then spam

Triple Thrust as well as auto attacks. They also have access to some AoE damage, but their much better at single target DPS. Remember that your damage skills consume souls and gain more power from that, so try to manage that as well as possible.

Overall their play style is kind of similar to daggers, but with an important addition of the Death Mark and some other important debuffs as well as the general ability to completely destroy nukers. Besides that, you deal a lot of damage with critical hits and your soul-based melee abilities. Soul breaker can advance into Soul Hound and later Feoh Soul Hound.

Exclusive for female Kamaels, arbalesters are ranged damage dealing class. Their gear and play style is mostly similar to archers, but they have access to a

Fast Shot. At the same time, they keep getting levels in Soul Shock, the crossbow attack that fears the target. Their other unique abilities are

Imbue Seed of Destruction, they slowly burn their target’s health or mana to later paralyze or silence them.

Like all Kamaels, arbalesters also are strong against mages, due to high magic resistance. Similarly to archers, this class is a powerful ranged single target damage dealer. At level 76 arbalester can become a Trickster.

Only male Kamael soldiers can become berserkers. This class also wears light armor but fights with a two-handed ancient sword. They’re strong melee damage dealers with high mobility and some unique defensive tools. They often find themselves right in the middle of a battle.

In PvE berserkers are mostly single target DPS. They’re decent at farming solo and in parties, but their AoE isn’t that great. At the same time, nobody really plays berserkers for PvE, they are one of the most powerful and fun classes to pilot in PvP. After all you can get through the early and mid game easily just by completing quests.

As you probably know by now, every Kamael class is good against mages, this also applies to berserkers. Kiting them is basically impossible, because in their kit includes multiple skills in that allow them to rush their target and some crowd control effects – this along with

Soul Barrier – a self-buff that increases magic defense and resistance to ranged attacks, makes them extremely powerful against both nukers and archers.

Besides that, berserkers can make their targets unequip their weapons with

Disarm which is a game changing ability for PvP. They also can massively buff their physical defense with

Swordshield (you slow yourself at the same time, but you still can use the rushes) and save their own life, restoring their whole HP bar with

Body Reconstruction. This makes them one of the most powerful 1v1 characters in the game, while with high mobility and Disarm they can also be really useful in big scale PvP.

After hitting level 76 berserker can advance into Doombringer.

Inspector is a remarkable class because it’s only available as a second or third subclass for Kamaels. Inspectors are mostly supportive characters with some combat ability, heals and debuffs. They have access to light armor and rapier masteries as well as some attacks for this type of weapon.

Their skillset is mostly useful for PvP and some specific PvE situations. Inspector’s buffs are extremely potent, but they only last 15 seconds, some of their best examples are

Magic Impulse for wizards and

Appetite for Destruction for physical damage dealers. That's a great sign for big scale PvP, farming huge trains of monsters and killing raid bosses. Their debuffs are really powerful too, especially for PvP.

At level 76 an inspector can turn into judicator. Then at level 80, they get access to

Lightning Barrier, powerful buff that can paralyze enemies who attacked you.

As you can see, Kamaels strengths lie mostly in their PvP capabilities, especially against nukers. Kamael classes are pretty difficult to play, so we wouldn’t recommend them for the beginners. That being said, if you played other Lineage II Classic characters before, enjoy PvP and like having room for skill expression, you could definitely try playing Kamael and find a lot of entertainment!