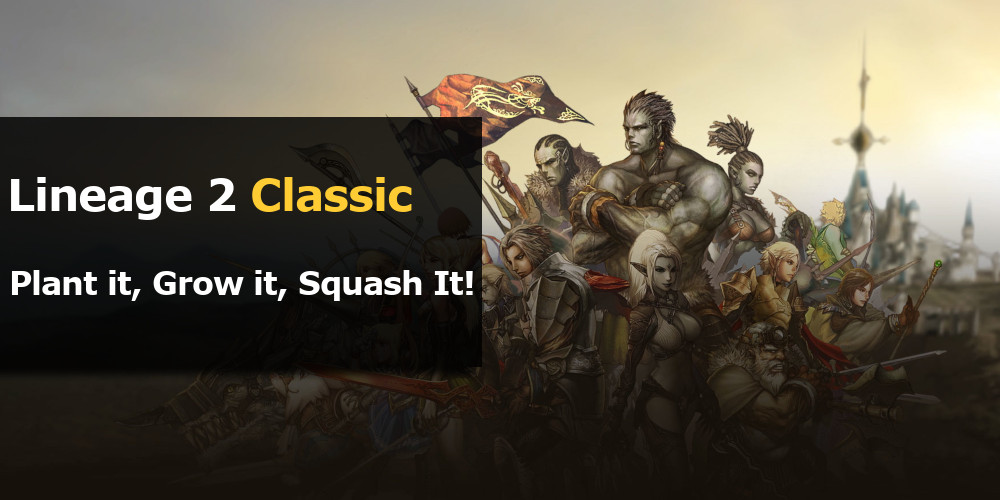 Lineage 2 just turned 15! It’s a great reason to celebrate and NCSoft decided that Lineage 2 Classic players also get an anniversary event. It’s called Summer Squash Event and will last from June 12 to July 10. During this time players will be able to collect nectar, grow squashes and smash them for rewards.}

How does it work?

During the event, every player who is killing monsters in any hunting zone that’s appropriate for their level will loot Nectar. There’s a chance of getting it at all times, but between 20:00 and 24:00 server time, the drop ratio is tripled.

Nectar is a special event currency that you can exchange at Puss the Cat in every one of the biggest towns. You can get Squash Seed for 20 Nectars or a Large Squash Seed for 75. There’s also an item available for Adena. It’s called Chrono Weapon and it’s necessary to smash the Large Squashes.

Planting a seed will result in summoning Young Squash or Young Large Squash (depending on used seed). After that you have a three minute window to feed it five Nectars, to make it ripe. Then there’s a chance of getting one of the three possibilities.

Opening squashes can provide you with really valuable rewards. Especially the large ones have a chance of containing some great stuff. You can get standard, improved or blessed enchantment scroll for different grade of armors and weapons (up to A-Grade).

There’s also a chance of finding Sealed Runes of stage 9 and 10, armor and weapon supply box of different grades, crystals or Box of Superior Dye. The Emperor Squash can even contain Raid Boss jewelry – there’s a small chance of getting a Zaken’s Earring or a Baium’s Ring.

The smaller squashes can provide you with lower grades scrolls, as well as some event-specific consumables. Cherry Juice, Mango Juice and Strawberry Juice provide a respective Prophecy buff upon consumption and they can only drop from the regular squashes. Hero’s Recovery Potions and Hero’s MP Recovery Potions can be found in all kinds of squashes, the large ones hold higher quantities of them.

As we already mentioned, the event will last till July 10. Most of the rewards are permanent, but some of the event-specific items will vanish from players’ inventories on that day. Of course Nectar and both kinds of Squash Seeds, both types of hero’s potions and the Shining Scrolls of Mood Melodies. Don’t worry though, if you manage to get a Baium’s Ring, it won’t disappear after the event.

This is a great moment to log back into Lineage 2 Classic. The event will last almost a month and that’s plenty of time to farm up a hefty supply of Nectar to later plant and open some squashes. The event is great not only for the high level, geared up character. You can easily collect plenty of Nectar as a low level player. Celebrate Lineage 2 15th birthday and get some of that sweet squash loot!

If you want to improve your L2 Classic experience even more, make sure to check out all the virtual goods available at MMOAuctions!