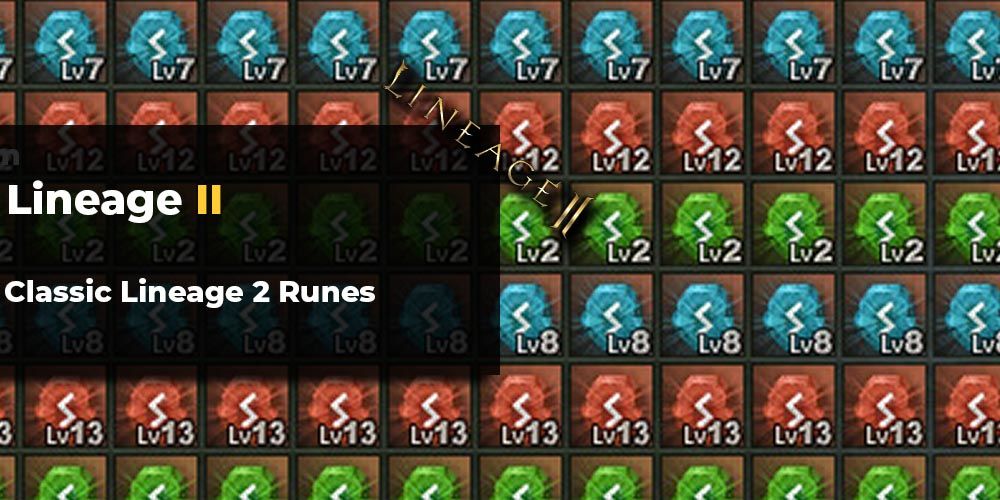 Lineage 2 Classic runes (L2 classic runes) are special items that you can use to add an extra effect to your weapon. There are eight types of runes and each of them has two possible special abilities it can endow the weapon with (which gives a total choice of 16 bonuses). While adding a rune to your item, you can choose which one of the two options you want.

The ideas behind the rune system

There are 13 levels of L2 classic runes and to get the higher ones you have to combine them. The whole concept behind the runes combination is pretty simple. You need a rune you want to improve and a level 1 rune of the same type. If you succeed, you get a rune that’s one level higher than before, if you fail, you lose the main one and you’re left with level 1 rune. The higher level your rune is, the bigger chance to fail.

NCSoft also introduced super runes. If you have a rune that’s level 8 or higher, you can exchange it for a super rune of the same type and the same level at a NPC blacksmith, but it will cost you 24,900,000 Adena and 8 A-Grade Gemstones. You can’t further combine the super runes and their effect slightly changes. For example, if you choose a Sigil’s Rune for physical defense, the level 11 super rune will be stronger than level 13 common rune. If you decide to use it for extra health, the common rune will give a fixed flat bonus, while super rune will grant you an extra percentage of your HP. In some other cases the super runes give completely different bonuses than the common ones.

Here’s a list of runes and their common and super effects:

How to get runes?

Currently there are two ways of getting runes in L2 Classic. You can either loot them from Raid Bosses, or get them through Olympiad, by earning Marks of Battle and trading them for sealed runes at Olympiad Manager.

You can only loot or buy level 1 runes, the only methods of getting higher level ones is combining them, or buying them from other players of course.

If you already have a rune you want to use, you just have to visit any non-starting town NPC Blacksmith and arm yourself with some gemstones of the same grade that your weapon is. There are a few basic actions that you can do regarding runes.

Lineage 2 Classic runes - What can you do with runes?

First option is simply adding a rune to your weapon to get the special ability. This process can’t fail and there’s no difference in cost between different levels of runes. The only thing to keep in mind is that adding a super rune to your weapon costs more gemstones than adding a common one. That shouldn’t be a problem though, if you already have access to super runes, you surely can afford some more gemstones.

Second action is removing a rune. The same as before, you have to pay some gemstones and the only cost difference is between common and super runes. Removing a rune always succeeds and you will get back both your rune and your weapon. Removing runes is cheaper than adding new ones.

Another thing to do is replacing a rune in your weapon. This action is overall the cheapest if you look at gemstones only, but at the same time it ends up destroying the old rune. Still, it’s a viable option if you don’t care about the rune that you have inside the weapon at the moment.

The last basic action is exchanging runes. You can give the Blacksmith two runes of the same level and type and they will give you back a single random sealed rune of the same level. It’s usually best to try and sell unnecessary runes to other players, but if you have two identical runes that are useless to you and you struggle to sell them, you can go for the NPC exchange. Keep in mind that you’re not protected from getting the exact same rune you offered, in which case you will simply lose a rune.

There’s also a possibility of upgrading a level 8+ rune into a super rune of the same level, but we talked about that already.

Which runes should you choose?

Obviously, different classes will make use of different kinds of runes. At the same time the rune system is not perfectly balanced at the moment. For instance the Othell’s Rune is believed to be notoriously overpowered on most physical damage dealers, because of how powerful the critical rate bonus is.

For supportive mages like elven elder, shillien elder, bishop etc. the mana recovery is by far the best option. Healing power bonuses from runes are pretty bad, so going for them is a waste of rune slot. The other viable option is increasing your mana bar, but the percentage increase from Super Wynn’s Rune is a lot better than flat increase from the common Iss’ Rune and getting a super rune will be really difficult early on. At the same time, the latter can also give you the mana recovery bonus which should be your go to.

As the only pure healer in the game, bishop has one more viable option. Casting speed bonuses might prove very useful, especially in PvP situations, when you definitely don’t want to get interrupted. The faster heals can sometimes completely change the outcome of a fight.

The DPS mages, or simply nukers (sorcerer, necromancer, spellsinger and spellhowler) also have a few decent choices. The most standard division would be magic attack for PvE and casting speed for PvP. The Feoh’s Rune also offers the bonus magic attack with extra mana consumption, in theory it might work well for farming with a recharger, but this rune choice is somewhat underpowered.

Of course casting speed bonus also accelerates your farming, but magic attack is usually better for that, because it reduces the amount of mana necessary to kill monsters. If you’re feeling lucky and you have access to super runes, there’s always a possibility to go for the magic critical ratio that will make some of your spells extremely devastating.

Every dagger player’s end goal should be the Super Othell’s Rune that increases blow land ratio. After all that’s the main source of their damage and hitting them more reliably is really important. Before you get the ability to get that super rune (which is probably the most desired one in the game, because it’s other effect is very powerful critical ratio bonus), you should go for either critical damage or critical rate. Anything else will be suboptimal.

As we mentioned before, Othell’s rune is overpowered on most physical damage dealers. Combine it with low efficiency of the p. attack bonus and you’re left with basically no choice. As an archer you can never go wrong with the extra critical rate, it will most likely be the best option for both PvE and PvP. Silver rangers can go for the attack speed bonus for even faster stuns, but it’s a strategy viable only for PvP and it comes with sacrificing some of the damage output, much safer to go for Othell’s.

The rune choices available for tanks are pretty situational. To get tankier you should go for physical defense bonus, or the super rune percentage HP boost, but with good gear and a competent healer you should not have any problems with surviving as a tank in most situations.

At the same time, your damage output in a big party is negligible and improving it with a critical rate or attack speed buff is not that important, because the party doesn’t really on you to deal damage and has other people to get it done.

The consensus changes for 1v1 fights, predominantly the Olympiad. Tanks, especially dark avenger and shillien knight are deceptively powerful in those situations. This is where the overpowered status of Othell’s Rune comes out to play again. If you want to succeed in the Olympiad, just get the strongest critical ratio boost available and try your luck.

For this class everything depends on the chosen play style. If you’re going to be a physical damage dealer alongside your servitor, go for the critical ratio from Othell’s Rune. If you’re more keen on the mage play style, then go for casting speed. Warlock and elemental summoner have access to pets that regenerate their mana. Phantom summoner doesn’t have that luxury, so you might consider going for the mana recovery rune.

We definitely recommend going for the physical damage dealing. The Othell’s Rune is simply too powerful to pass on.

For the sake of this text, we will group basically every melee fighting class that’s not a tank, nor a dagger in this category. This means that gladiator, warlord, Orc fighters, Dwarves and even the supportive bladedancer and sword singer will all fit here.

Without any surprises, you can’t go wrong with Othell’s on these classes, especially in PvE. If your class uses a blunt as a secondary weapon for stuns (for example, you should do that on gladiator and destroyer), then you can put Tyrr’s Rune inside it for a faster stun rotation.

Of course the Super Tyrr’s Rune for polearms is good for classes using this weapon type, especially for warlords.

Most of the bruiser classes are not too good in mass PvP and you can’t change it with a single rune. They might be very powerful in duels and in the Olympiad though. Othell’s is still a great choice for those situations, but you might consider going for something else in some matchups. Movement speed might be really helpful if you have trouble with sticking to your target, attack speed might also be relevant in some situations.

As you can see, the rune system is far away from being balanced at the moment. Supports have two or three viable options. Nukers have a similar situation. Pretty much everyone else can simply go for Othell’s and get a lot of value from that. That also makes this rune the most expensive one in players to players trading.

There’re also some things to keep in mind while making your choice. For example, the common Yul’s Rune can offer a higher movement speed bonus than the Super Iss’ Rune. At the same time some rune bonuses are vastly underpowered, getting physical attack or healing power look like wasting slots with how strong some of the alternatives are.

A general tip – you should always put runes in weapons that you already enchanted to the point that you’re happy with, there’s no reason to risk both a strong weapon and a strong trying to enchant the item even higher.

Another think you should do to get runes (if you have some Adena or gemstones to make use of them) is trying to go for low level Raid Bosses even in the early game. It shouldn’t be that difficult to form a party and try to kill some bosses, the rune drops won’t be sensational, but you’ll get something.

All things considered, the rune system is another mechanic introduced so players have another thing to grind for in the endgame. The whole concept is based both on grind and patience, as well as luck and chance. That being said, we hope this guide will prove helpful in understanding the system and we wish you good luck in acquiring and combining runes!