World of Warcraft Battle for Azeroth gets a new update! WoW Tides of Vengeance.

The Battle for Lordaeron summary

The Battle for Lordaeron is pre-Battle for Azeroth scenario which acts as an introduction to events taking place in the expansion mentioned above. The scenario itself is required to access features of Battle for Azeroth. However, the scenario is mandatory for only the first character that completes it, next ones can simply skip it.

The Battle of Lordaeron occurs after the Horde attack on Teldrassil. It is followed up by Alliance forces storming the Lordaeron in order to take control of it.

The aftermath of the Battle of Lordaeron leaves Undercity uninhabitable because of large quantities of blight surrounding the area.

Here are two videos concluding this scenario for both Allliance and Horde.

“We will continue learning more about the story of Varok Saurfang, which we last saw broken in prison in Stormwind, unwilling to return to Sylvanas Windrunner’s Horde.”

“We will have more development on the stories of Tyrande Whisperwind and Malfurion Stormrage, learning more about their emotions after the Burning of Teldrassil and what comes next for their tales.”

“The next part of Vol'jin's story covers Talanji trying to discover why Vol'jin appointed Sylvanas as the next Warchief. There are no clear answers at the end of her investigation, but dark implications.

This questline takes place after the Zuldazar raid, as Baine is horrified by Sylvanas' actions.”

First let's take a closer look on newest Warfront titled Battle For Darkshore, and what awaits brave warriors who decide to battle through forests and shores of north-east Kalimdor.

Second, in terms of added Warfronts, Darkshore initially starts in the hands of The Forsaken and The Horde.

Alliance players willing to participate in Warfront will have to meet two requirements, first, they have to be max level (which is 120) and then complete the opening story with Tyrande and night elves. Here’s interesting cinematic where we can see the different side of Night Elves:

After completing these tasks they will be eligible to queue for the Warfront.

The Warfront itself consists of three stages: contribute, siege and patrol.

Contribute phase focuses on players gathering and bringing materials to designated NPCs which are located in Dazar'Alor for Horde and Boralus for Alliance. This phase ends when a threshold for resources is met. Resource gathering takes roughly a week usually.

Next phase is Siege, lasting roughly 30 minutes, where players join a 40-man group and are transported to an instance which looks similar to open world Darkshore region, except now it's populated with special NPCs and objectives required to complete the siege.

Your main objective as Horde player is reclaiming Darkshore after losing it to the Alliance. Alliance players have a similar goal which is taking Darkshore for themselves. For a more in-depth look, this short clips presents the siege from Horde perspective.

Patrol is the last of the stages and is available only if your faction successfully conquered the region. Players from the faction currently controlling Darkshore will be able to access a new faction-specific World Boss, rare creatures, and acquire new gear including new pets and mounts.

There are also brand new World Quests available for those still starving for new content.

You can receive them by killing various mobs in the Warfront.

In terms of leveling system, experience required for each level has been substantially reduced.

As far as things related to leveling go, you might be interested in these new trinkets added in this year’s last patch:

You can purchase them from Provisioner Mukra located in Dazar’Alor.

Next on the list are Heritage Armors, Blood Elf and Dwarven ones, players with maximum level who play as either allied races will be able to get transmog set unique to their race.

In order to obtain a new set, the player has to be Exalted with their home-city (Ironforge for Dwarves and Silvermoon for Blood Elves) and finish new quest line associated with armor. Questline can be started by visiting the embassy in Orgrimmar (Horde players) or Stormwind (Alliance players). Below are images of the new set. 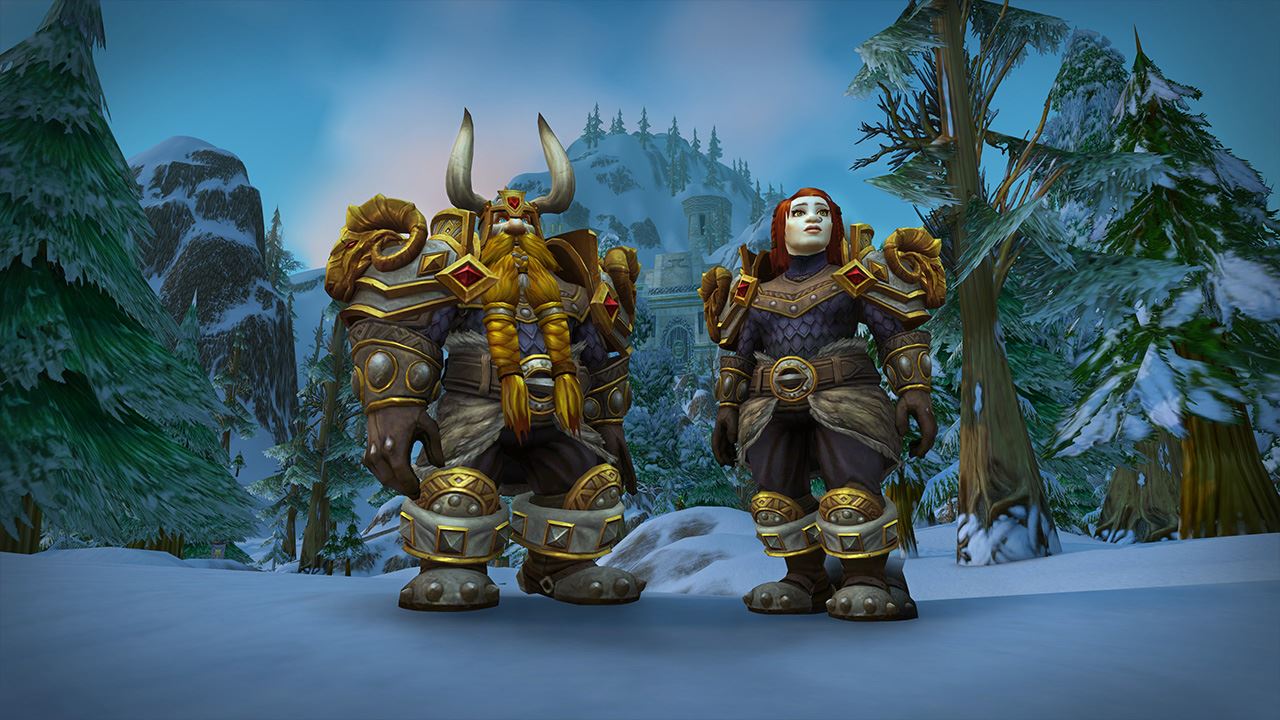 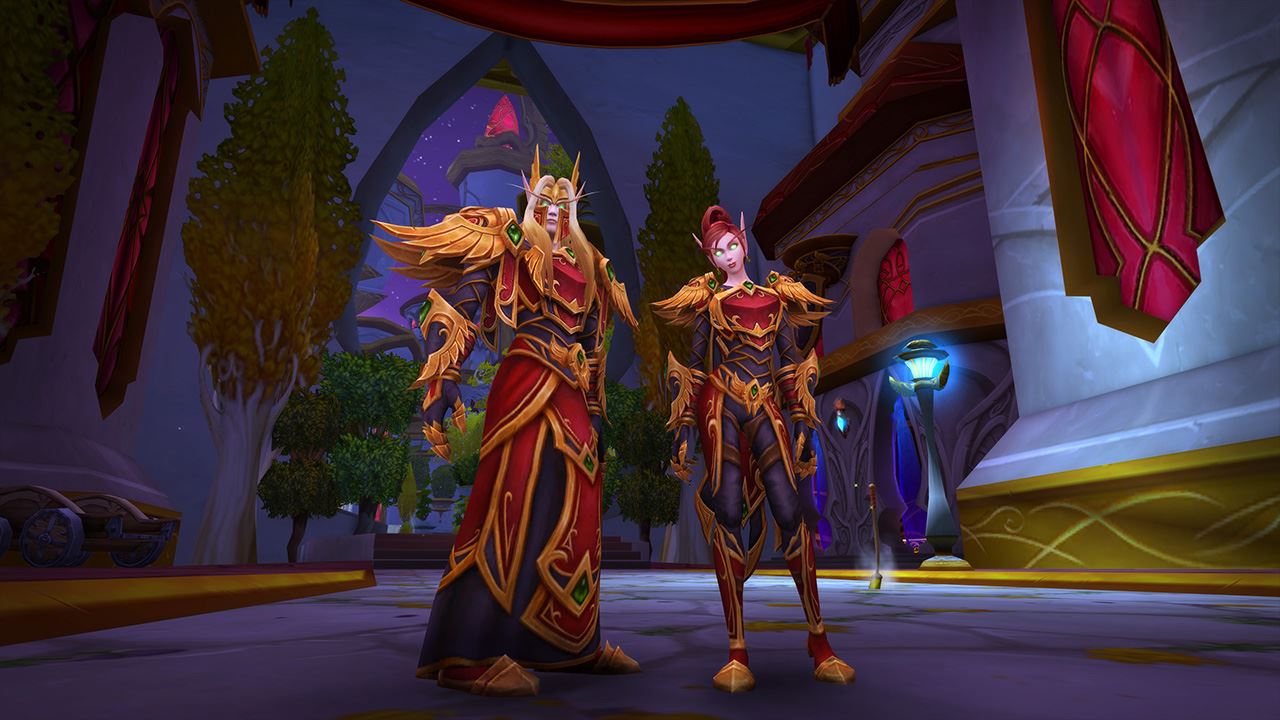 Level 110 players and above will get to experience Faction Assaults in Zandalar and Kul Tiras. However, they have to have unlocked World Quests on their account and start the War Campaign.

Faction Assaults will switch between Kul Tiras and Zandalar, offering players a chance to either help their faction attack or defend by completing various World Quests. If players want to check when the next Faction Assault is taking place, they have to open their world map, there a Horde or Alliance symbol shows the which side is currently invading.

You can also see the timer counting down in the upper middle section of the map. When it reaches 0, Assault ends. 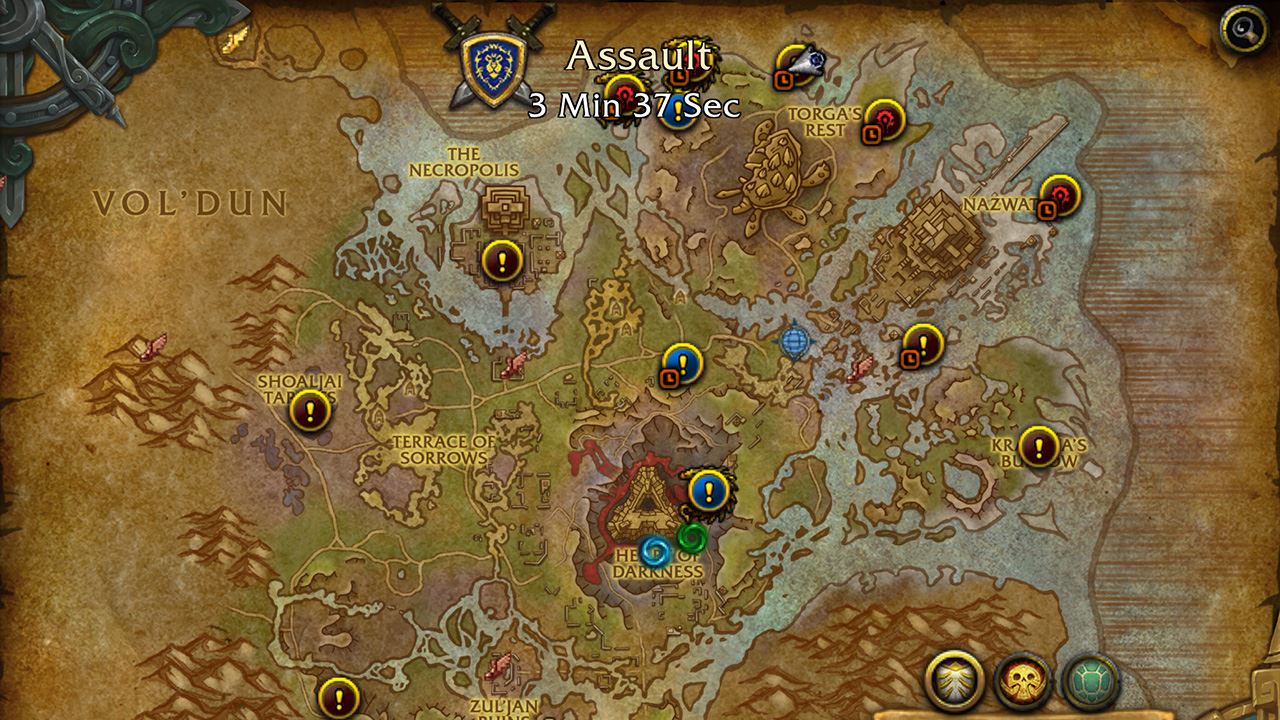 For players not familiar with what Island Expedition is: they are three player instances where you can either queue alone and be assigned with other players seeking adventures or join as full group, just like when joining a dungeon, from there you can choose if you want to play on Normal, Heroic or Mythic difficulties or face other players in separate PvP category.

On the isles themselves, your goal is to obtain as much Azurite as possible, either by killing monsters, mining special nodes or finding treasure chests that appear on the map.

Below is the picture of Heavenswood, one of the new islands. 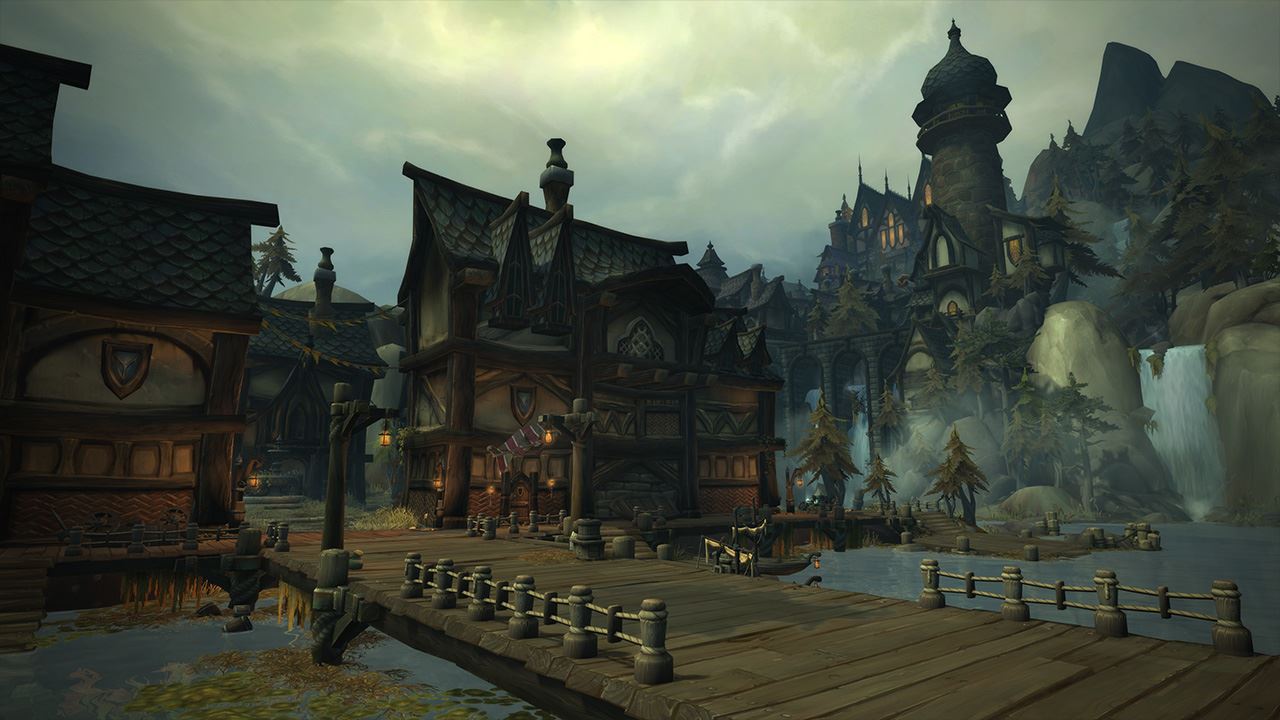 There are some changes to the mechanics of obtaining rewards and completing the islands themselves. Now you don’t have to go out of your way to find and kill special enemies, because rewards for particular islands are given for enemies present on the island, not the ones you kill, thus drastically reducing the time needed for completing island for those that wanted to max out their possible rewards.

Also, the requirements for the weekly quest “Azerite For the Allliance” and “Azerite for The Horde” have been reduced down to 36,000 Azurite.

Along with Tides of Vengeance arrives new pet dungeon named Gnomeregan Pet Dungeon, the rewards for completing it are as follows:

Some of the enemies on the islands wear recolors of old raid sets, in case some of them may interest you here is their list.

Maybe a bit late, but in this update Blizzard added the option to solo queue for Looking For Raid type of the Legion raids. They are accessed by talking Archmage Timear near the Violet Hold in Dalaran.

Below is the list of changes applied to each class segregated by Class.

You heal for 10% of all damage you deal to enemies with Frailty.

Charges changed from 0 to 2 Charges.

Entire Class Changelist for Patch 8.1 would take too much space so for those wanting to see how it affects class they are playing I recommend visiting official WoW site or Wowhead's comprehensive change log for Patch 8.1 where you can see each class: death knight, demon hunter, druid, hunter, mage, monk, paladin, priest, rogue, shaman, warlock, warrior.

You can also visit their forums to give feedback, ask questions to community or simply join the discussion about said changes!

In the upcoming days, specifically 22nd of January we should expect Season 2 which will add Battle of Dazar’Alor Raid, Mythic+ Keystones and Season 2 PvP Arena and probably a lot more.

Armor sets from Battle of Dazar’Alor Raid will be inspired by Bwonsamdi’s armor, just like Uldir’s was similar to Titan armory.

For Hearthstone players I have prepared a quick update that arrived on December 19.

This latest patch for Hearthstone’s latest expansion Rastakhan’s Rumble contains only some balance changes for Standard and Wild formats. Citations are taken from official Blizzard site.

“Wild Growth and Nourish have been present in every mid-range, combo, and control Druid deck since their introduction in the Basic and Classic set.

When cards from the Basic and Classic set are too powerful, they can have negative long-term effects on the game. Continuously playing against these cards can start to feel repetitive, and they can feel so mandatory that they stifle creative deckbuilding decisions.

By increasing the mana cost of both cards by one, we expect them to be considerations in late-game control Druid decks, but more difficult to fit in strategies that don’t directly take advantage of ramping mana.”

“Odd Paladin has consistently been one of the most powerful and most played decks since its introduction in The Witchwood. By removing Level Up from Odd Paladin, we still expect it to be a competitive board control deck, just with more consistent damage output that should be easier to play around.”

(changed from “Battlecry: Summon a copy of this minion”)

“Shudderwock brings an interesting combo to the table, but playing Shudderwock multiple times in a single game can be frustrating.

(changed from “Give your weapon Lifesteal”. Mana cost is 2)

“We love the fantasy of building a powerful weapon over the course of a game with Kingsbane, but granting it a permanent Lifesteal effect with Leeching Poison resulted in an endgame with few weaknesses, as well as conflicting with our philosophy that Rogues should not have persistent self-healing effects.

Making the Lifesteal effect only active for one turn should address some of the power level issues with Kingsbane Rogue’s late game.”

That is all for now, if you want to take a more detailed look into the update or if you want to read patch notes I recommend visiting official World of Warcraft site or checking News segment in Battle.Net launcher.