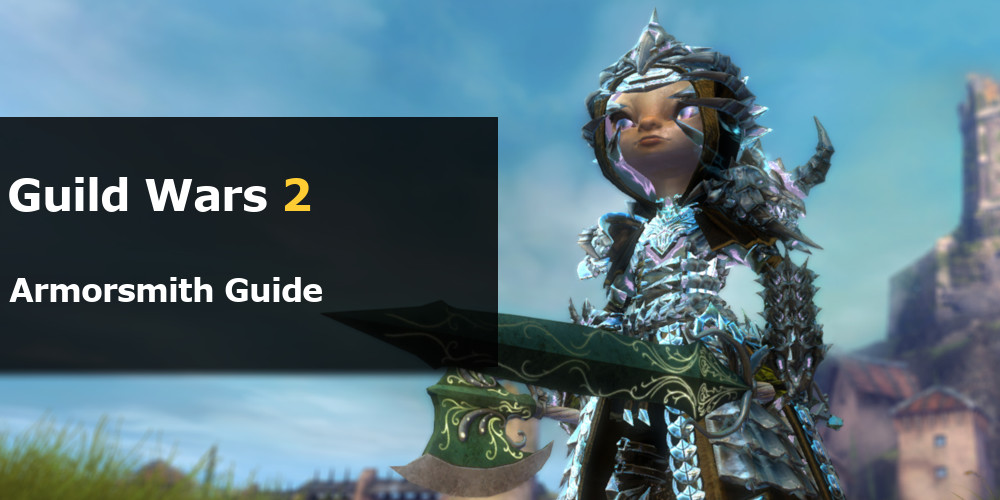 If you need a heavy armor set to equip your GW2 character, you’re in the right place. All three soldier professions: Warrior, Guardian, and Revenant, can use the equipment crafted by Armorsmiths. The materials that they can refine and use to create items are different tiers of metal and cloth. They can also produce boxes and some runes. If you’d like to learn a thing or two about other crafting disciplines and the roles that they play in Guild Wars 2 economy, we recommend checking out our Crafting Guide.

Unfortunately, crafting in GW2 is a little bit different than in other MMORPGs. Starting slow and gradually developing your crafting skills as you sell your low-tier items is not an option. It’s basically impossible to make any money on low-level crafts.

With Tomes of Knowledge (and some other sources of quick experience) being widely available, very few players actually take their time to level up in the old fashioned way. That makes the low-level equipment almost worthless.

At the same time, crafting endgame gear is definitely still valuable. But to create the strongest armors in the game, you have to level up your crafting discipline to the required level (at least 400). This created a peculiar economy, where the market is flooded with basically worthless items. Players are basically wasting materials to craft them only because it’s the only way of leveling to 400, at which you can start making some useful stuff.

The obvious downside (besides the complete lack of non-endgame economy) is having to invest some gold into leveling, without getting any immediate returns. On the other hand, the process is not time-gated in any way. If you have enough money, you can level extremely quickly and conveniently.

If you expected to gather materials while questing, just to craft a new armor set every ten or so levels, you’re going to be disappointed. Armorsmith, just like every other equipment crafting discipline, has two important milestones during the leveling process. The first at level 400. At this point, you can start crafting some really strong runes and the Exotic-grade armor sets. While they’re not exactly the best in the slot, they are much more than decent. You can easily go for dungeons as well as most fractals and raids with a good Exotic set.

The second milestone is at level 500, which is also the crafting level cap. Hitting it lets you craft the Ascended armor, which is the most powerful tier in the game (equal stats to the much harder to get Legendary tier). Creating it is not only expensive but also time-gated. You’re probably going to want it at some point though.

Of course, crafting is not the only way of getting Exotic and Ascended armor sets. They can be earned by completing dungeons, fractals, and raids. The obvious advantage of crafting is the control over the items that you’ll be getting, which makes it much more reliable. At the same time, there's a single great thing about the armor crafting disciplines. While a single character will often use multiple kinds of weapons, depending on the build that they're running, they will always wear the same type of armor. Armor class is one of the profession-defining mechanics in GW2, so if you level an Armorsmith, you have the guarantee that you will always be able to craft equipment for all the soldier professions.

All the recipes are divided into tiers, based on the crafting level required to actually make them. The list of all tiers looks like this:

After hitting the most important threshold – level 400, you will be able to craft the Draconic Armor Set. Using the right Insignia, you can make this Exotic armor strong enough for a lot of the post-80 content.

At the same time, you get access to crafting some really powerful runes. Every armor crafting discipline can produce the quite popular Superior Rune of Strength. There also are some interesting Armorsmith exclusives. Most of them are mainly focused around increasing survivability, but Superior Rune of the Krait is a great example of a condition DPS boost. Most of the superior runes require recipes to be crafted. The recipes can be acquired in a few ways. Some of them can be bought from certain vendors. You can find the others when opening a dungeon chest.

The level 400 Master recipes also include four gifts that can be crafted by Armorsmiths. They are Gift of Light, Gift of Darkness, Gift of Entertainment and Gift of Weather. All fo those are used in some Legendary weapon recipes in the Mystic Forge. Just remember, the Legendary components are account bound, so you can only make them for personal use.

After hitting level 500, you unlock the possibility of crafting the Heavy Illustrious Armor Set. As we already mentioned, stat-wise it can match even the Legendary gear. That being said, crafting Ascended gear is a multi-stage process that requires plenty of recipes and a lot of time. The time-gating makes crafting a whole Heavy Illustrious Set from scratch takes at least 25 days. However, it’s still faster than light and medium variants that take 36 days each.

That’s why many people elect to stay with the Exotic armors for a longer time. At least until they get enough gold for some of the intermediate materials which make the process significantly quicker. Crafting those intermediates is also a great way to make money with a level 500 Armorsmith. Time-gating ensures that the supply is never too high and keeps the demand relatively high.

The leveling process, especially pre-400, can be a bit annoying. You’re going to have to spend some gold on a lot of ingredients just to craft tons of worthless items. The expected returns for those products are insignificant. You’re basically paying gold to get experience.

That’s why many players use online calculators to find the cheapest and fastest way of getting through this part. We’re going to show you an example of an efficient route that you can use to get maxed out. Keep in mind that the prices of materials can change over time, so you always want to use an up-to-date one.

This part is basically a necessary evil. Consider it an entry fee. You have to pay some gold to get your crafting license and start making the good stuff. Unfortunately, Armorsmith is one of the more expensive ones. The initial investment cost can exceed over 40 gold and you won’t get almost any of that back. Just remember, the price is going to be worth it when we get to 400. Luckily, the process is at least fast and simple.

Use the last item, Bronze Helmet Casing, and Jute Healing Insignia to discover Healing Chain Helm and make 18 more of them.

Combine it with Iron Casque Lining and Iron Casque Casing to discover the Rejuvenating Scale Helm. Then make 18 more.

Use it alongside Iron Casque Lining and Iron Casque Casing in order to discover Ravaging Scale Helm and make 9 more.

Discover Major Rune of Svanir with 4x Pile of Lucent Crystal, 1x Corrupted Core and 1x Charm of Potence. Make 7 more of them.

There are seven discoveries at this point.

Following this exact route should allow you to hit 400. At this point, you probably should prioritize crafting an Exotic armor set (if you don’t have one already). At this point, you get the privilege of crafting items that actually have some value (Exotic armor pieces and superior runes). If you’re not in a rush for Ascended armor, it might be a good idea to wait with power leveling and just craft the good items as you need them or when you can make money off of them. That being said, if you’re a completionist, you can go straight for the 500, it’s not even that much of a gold sink since you can get some returns now.

Unlike the last part, this is definitely not a must-have for every player. That being said, if you’re a completionist, you can go straight for the level 500, it’s not even that much of a gold sink since you can get some returns now. Here’s an example of a route that you could take.

At this point, we mostly prepare the components for discoveries in later levels. If you want to get to level 500 as efficiently as possible, you're going to have to discover a lot of items.

There are eight discoveries in this tier:

This final step requires 11 discoveries. You should see the pattern already, so we’re not going to break down the recipes.

At this point, you should be fully maxed out in the Armorsmith discipline. That allows you crafting every item that this crafting class has access to. Some of the most valuable endgame products will require having a recipe (you can’t just discover them like that - you need to buy or get an actual recipe-item). You can also start crafting your Ascended armor, as we already mentioned it’s going to require not only the recipes but also plenty of time.

Follow our continuously updated blog if you want to find more articles and guides. We post content about Guild Wars 2, other MMORPGs and all kinds of online as well as mobile games.

This hit ArenaNet MMORPG still has a lot to offer to its players' community. Over 5 million copies have been sold before GW2 switched to the limited free-to-play system in 2015. Gamers can pick out of nine available professions and enjoy the huge amount of freedom in terms of creating their personal favorite builds through traits, specializations and equipment choice. Moreover, you can max out at least two crafting disciplines on each of your characters. The remaining ones are Artificer, Huntsman, Weaponsmith, Tailor, Leatherworker, Scribe, Chef (Cooking) and Jeweler.

There are plenty of things to do in the endgame. PvE activities include dungeons, fractals, and raids. In terms of PvP, gamers can grind their rank in structured PvP (most notably the Conquest mode) or partake in the huge World versus World (WvW) fights that put together players from multiple servers.