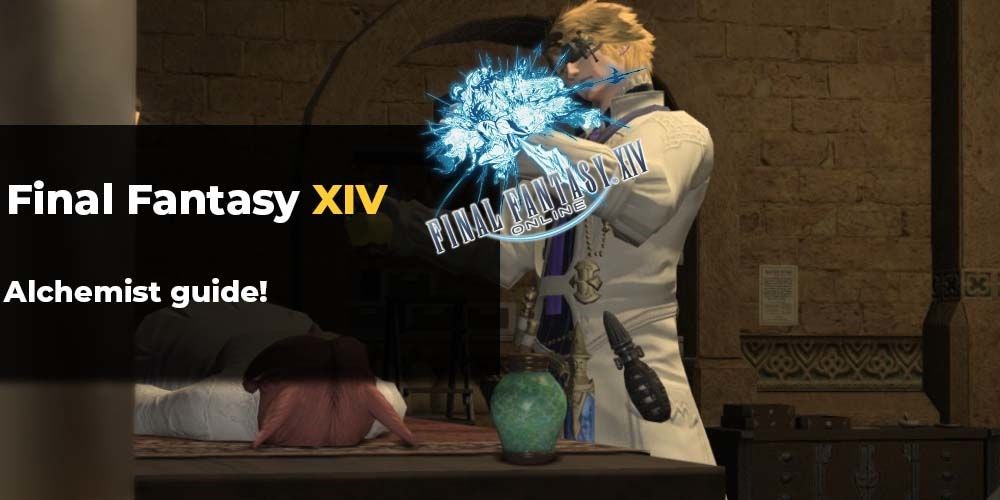 Alchemist is one of the eight Disciples of Hand classes in Final Fantasy XIV. The rest of them are armorer, blacksmith, carpenter, culinarian, leatherworker, weaver, and goldsmith. To unlock any of those classes, you have to get level 10 on any combat profession first. Check out the content of this FFXIV Alchemist guide to find the best methods of leveling alchemist, some points and tips, and much more!

Alchemists can craft numerous consumables such as potions, ethers, elixirs, cures et cetera as well as two classes of weapons – wands and books, making them especially useful for the classes such as conjurer that can later specialize into a white mage and arcanist, who can turn either into a summoner or a scholar. On the other hand, alchemists can work well with the Disciples of Land professions like mining and fishing that can provide valuable components for them. 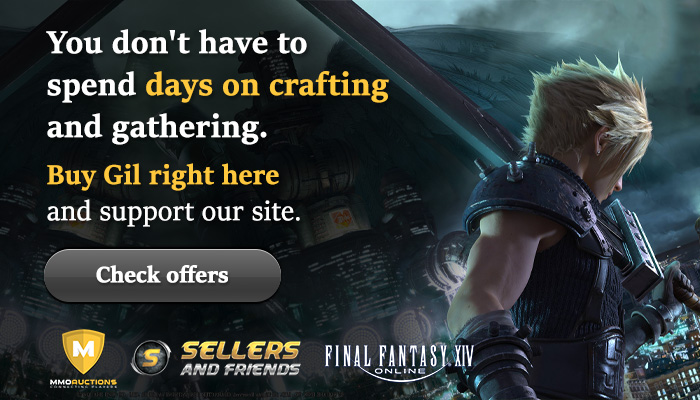 Alchemists can also create some materials used by other crafting classes, as FFXIV Disciples of Hand are interconnected, to kind of force players into leveling more of them. Top level items that alchemists can craft can often be sold for really nice prices, making this class quite profitable. To make the most Gil as an alchemist you'll need to know a thing or two about your server's economy to choose the best recipes, that will bring you the highest profit margin. You can also learn Desynthesis and break down some items, but that's material for another full guide.

There’s obvious synergy with those mostly healing and supportive professions, but at the same time, everybody can use consumables. That results in a fact, that leveling Alchemist is almost never a waste of time, no matter what combat jobs, you’re planning to main. Of course, it’s also important to remember that in final Fantast XIV you can max out every class and job in the game, on a single character. It will take a lot of time though.

If you decided to become an alchemist and got level 10 in your primary class, it’s time to make your way to Ul’dah, since that’s where the Alchemist’s Guild is located. Every time you craft an item, it's recipe will be added to your crafting log. The basic tools of an alchemist are an alembic and a mortar. Before we go into leveling - remember to upgrade your gear every couple of levels, it will make your progress decently easy.

Leveling up your alchemist

After you do that, you’re going to look for ways to accumulate experience in this class as fast as possible. Disciples of Hand rely heavily on Levequests (or simply leves) as their main and most basic source of experience. Alchemist is no exception in that case.

Leves are repeatable quests that are unique to every class. They’re time-gated because to accept them, players have to spend leve allowances. Every character gains 3 allowances every 12 hours and can collect up to 100 of them. It's often worth turning in the high-quality items. This way you can get better rewards, using the same amount of allowances. The Levequests are what allows for decently quick leveling that doesn't make you grind that much (just a little bit).

For most of the low levels, all the materials you will need to complete Levequests are available at NPC stores. For alchemist specifically, there are leves that you accept in Ul’dah and complete in Western Thanalan, at the same time other quests start in Western Thanalan and finish in Ul’dah.

Root Rush – take it from Eustace in Ul’dah, then craft three

Growth Formulas Alpha – for each one you will need 1 Water Shard, 1 Shriekshroom, 1 Quicksilver, and 1 Rock Salt. Finally, deliver them to Gigyion in Western Thanalan.

The Bleat Is On – the quest giver is Graceful Song in Western Thanalan. The objective is to deliver a

A similar cycling principle will be present in many other level tiers since it’s a very efficient way of quickly gathering experience. Another good option for the early levels is taking a look at the daily Grand Company turn-ins.

Some of the leves are triple turn-ins which means they can be done three times instead of one and grant 3 times the experience. That makes them another viable option for leveling up quickly.

For level 5, a good example of that is Distill, My Heart. Crafting

Distilled Water, consisting of 1 Water Shard and 1 Muddy Water is required to finish it, but remember that you have to do it three times.

Another option is cycling through A Jawebreaking Weapon of Staggering Weight and The Hexster Runoff. The first one requires a

Whispering Maple Wand (1 Water Shard, 1 Lightning Shard, 1 Maple Wand, 1 Growth Formula Alpha) and the other one needs you to craft

The rule of thumb remains the same. The only thing that changes is the higher level quests with better rewards.

The recommended triple turn-in is One for the Road, its objective is to craft

If you prefer looping through two leves, you should probably go for Using Your Arcane Powers for Fun and Profit – requires an 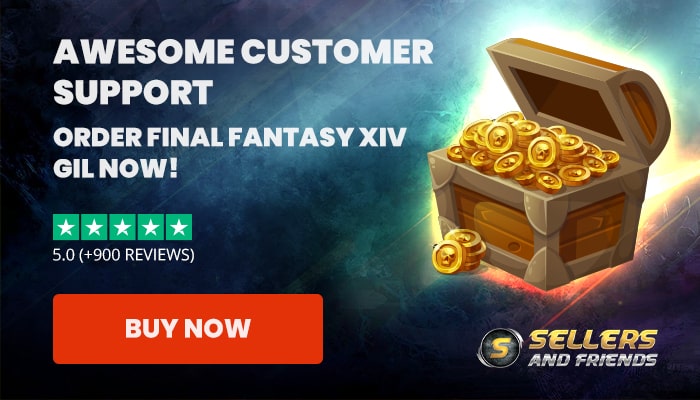 This time the recommended singular leve is not repeatable, but it offers a big reward for a single item. The quest is called Shut Up and Take My Gil and the goal is to deliver an

The most optimal cycle would be Kiss of Life, it requires you to create

At this point we say farewell to cycling and focus on the optimal repeatable Levequests. Especially since this time, there are some multiple turn-ins.

We recommend sticking with repeatable. The Wailer’s First Law of Potion is a multiple turn-in and demands to craft

At this point, there are three viable triple turn-ins to choose from. Growing Is Knowing requires

Here there’s only one leve that seems optimal. You can, of course, do some other ones if you feel like it, or happen to have the materials. But we strongly recommend doing the repeatable Always Have an Exit Plan, since you can buy all the ingredients at the NPC store. The objective is

In this tier, there actually is a good single leve. Arcane Arts for Dummies require a

At the same time, two repeatable is also worthwhile. Your Courtesy Wake Up Call demands

Smelling Salts (5 Water Shards, 4 Lightning Shards, 1 Desert Saffron, 1 Rock Salt, 1 Blue Landtrap Leaf). The other one is A Real Smooth Move and its objective is

We believe that at level 45 the optimal choice is the repeatable leve – A Matter of Vital Importance. It requires crafting

This was the original level cap of FFXIV, but each of the two already introduced expansion packs increased it by 10. The first thing to do at that point should be the level 50 class quest. Make sure you go to Ul’dah, talk to Severian and accept the Momentary Miracle quest.

All the Disciples of Hand post level 50 start depending on two sources of experience introduced in Heavensward. The Daily Beast Tribe Quests and the Scrip system.

They’re a great option for every non-combat class at this point in the game. They’re simple, very cheap and give nice exp rewards. It’s basically an almost perfect solution. The only drawback is the process of unlocking them.

In order to access Moogle dailes, you first have to complete an incredibly long chain of side quests. We still recommend doing that, because we believe it’s definitely worth it.

To start the chain, you have to head to The Churning Mists and talk to Mogleo. Accept the quest A Pebble For Your Thoughts, complete it and then continue through three next ones. After that, go talk to Mogloo and take Protecting the Pom, then the five quests that come after it. When you’re done, go to Ishgard and get Into the Mists quest from the Unflinching Temple Knight. Then complete the eight remaining quests. Finally, talk to Seething Stonemason and finish Tricks and Stones. After that, you will have access to Moogle Daily Quests.

Another quest that you want to complete after hitting level 50 is Inscrutable Tastes. It lets you use the Scrips system. The way it works is: you get rewards for crafting and turning in collectible items. The Collectable Synthesis skill allows you to grant that status to every item you create. This whole system rewards you with experience, Gil and later the Scrips that can be traded for really valuable crafting components at the Scrip Exchange.

If you don’t want to do any of that, you can, of course, stick with Levequests, but we seriously recommend unlocking those options, not only for the experience gains but also for profit. After all getting rich is one of the main reasons people level up their Disciples of Hand.

Stormblood raised the level cap to 70, but at the same time introduced new methods of getting experience for noncombat classes. They are not revolutionary though. Two new options that are very similar to the ones introduced in Heavensward.

Again they’re really cheap, super simple and give a lot of experience. One more time, there’s some effort necessary to unlock them. Fortunately, this time the quest chains are a little bit shorter.

This time it’s only eleven quests. The chain starts with Courage the Cowardly Lupin, to accept this quest you have to go to The Azim Steppe and talk to Fukudo. Then you follow it with three Kurobana quests. After that, you should go to Ochimi and take the quest called Perchance to Hanami and then the five following quests. After you’re done with both of those lines, go to Kurobana and take the Kurobana vs Gyorin quest. Congratulations, now you can access the Namazu Daily Quests.

This is just a continuation of the Scrip system. You’re still going to turn in collectibles crafted using the Collectable Synthesis skill. To unlock them, you just have to complete one side quest, called None Forgotten, None Forsaken, given by Galiena in Rhalgr’s Reach. The deliveries are quite heavily time-gated, but they give very handsome rewards.

Stormblood, of course, added some 60+ Levequests too, so feel free to do them if you like any. In general, the options we described above are more efficient, but leves aren’t that bad. Also, don’t forget about the class quest, but if you got that far, you probably know that already.

Alchemist is a great option to make some Gil off of consumables. Leveling this class is pretty similar to all the other Disciples of Hand. Good luck becoming one of the greatest alchemists in Eorzea!

Final Fantasy XIV: A Realm Reborn is an MMORPG developed and published by Square Enix. It introduced an interesting and complex progression system that allows the players to master all the professions on a single character. The list of combat classes available to players is Gladiator, Marauder, Arcanist, Archer, Lancer, Pugilist, Rogue, Thaumaturge and Conjurer. 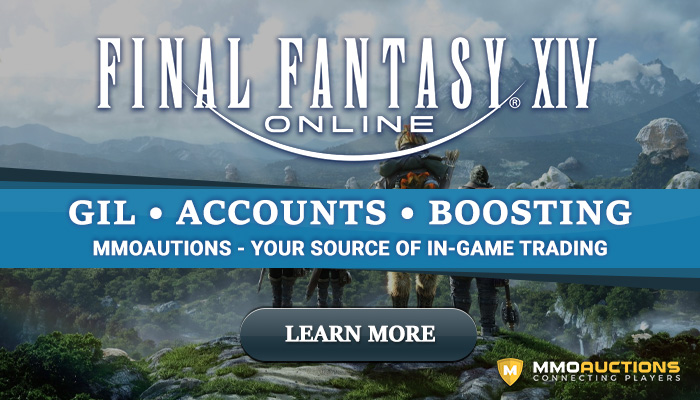 They can later specialize in jobs, which are respectively: Paladin, Warrior, Summoner or Scholar, Bard, Dragoon, Monk, Ninja, Black Mage, and White Mage.

FFXIV ARR created a devoted and friendly community of players, based on the long time fans of the series, as well as other players, who are interested in a well-crafted MMORPG. It offers the players a riveting main story and fascinating lore, as well as some of the classic genre gameplay, like dungeons, trails, and raids. At the same time, it also contains some unique extra activities, like Chocobo Racing, Lord of Verminion and Triple Triad. 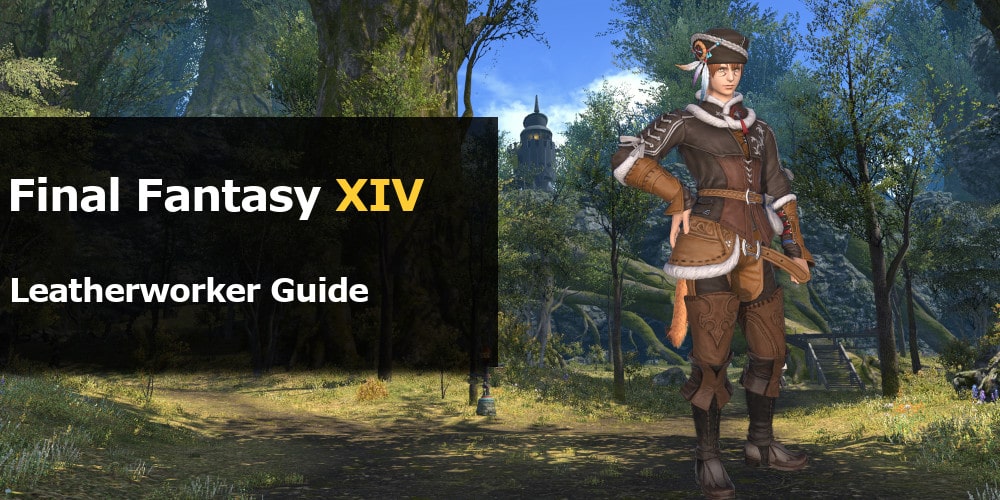