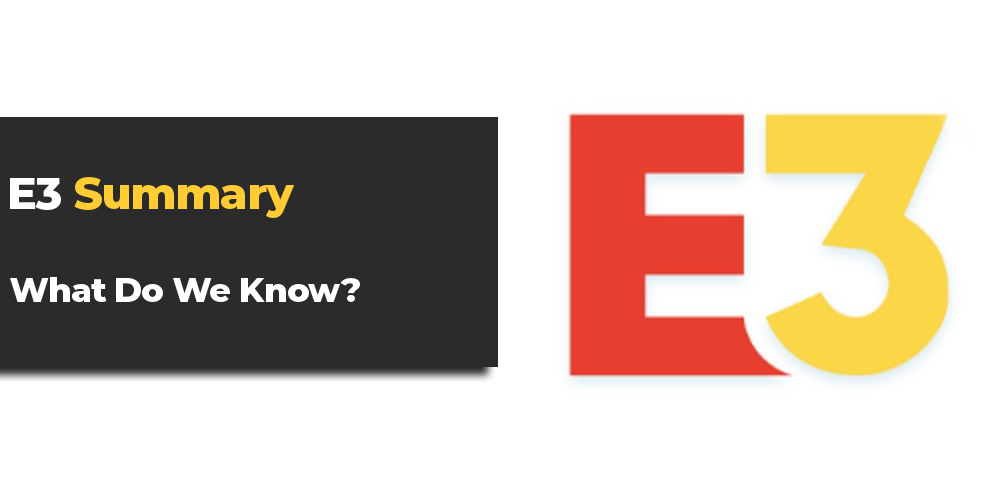 As all the emotions surrounding this year’s E3 are slowly calming down, we can take a deep breath and look back at all the E3 2019 release dates announcements and more intersting moments that happened during this huge video game event. Let’s take a look at this E3 2019 recap.

On Thursday, June 6th, before the E3 even really started we got a very interesting Google and Bungie shared conference. Google introduced a subscription based Stadia – a new revolutionary approach to gaming. It’s based on cloud gaming that will allow players to enjoy even the newest video games without the necessity of buying new consoles or upgrading their PC. If you want to learn more about it, check out our article about Google Stadia. The platform will launch in November.

The first flagship game for Stadia will be Bungie’s Destiny 2 that will be available to all the Stadia subscribers. They also announced that the next chapter of the game – Shadowkeep, will be realesed on September 17th.

Developers also talked about their efforts to make the game as cross-platform as possible. They’re adding cross-saves feature and they’re looking at a possibility of cross-play somewhere in the future. Destiny 2 will also become available on Steam.

EA once again had their own event at the beginning of E3. They showed gameplay of Star Wars Jedi: The Fallen Order and talked about the combat mechanics and different ways of using the Force. Then there was a segment devoted to Apex Legends Season 2 and the new character Wattson.

The Battlefield V conference announced upcoming maps and the release date of season 4 and some sneak peeks into season 5 that will include the Pacific Theatre with one of the maps being Iwo Jima.

FIFA 20 will include a street football mode called Volta, there are also multiple changes to the main 11v11 mode, that will impact both the casual and the pro players. In Madden NFL 20 the Pro Bowl will return. Plenty more of career features as well as the Ultimate Team mode changes will be introduced. Finally, a new expansion pack for The Sims 4 – Island Living has been announced.

The release dates for all those games and updates are:

The whole Internet knows that during the Xbox press conference Keanu Reeves stole the show, while presenting Cyberpunk 2077. There also were some other interesting things shown though. They actually announced tons of games coming to Xbox, launch of the Xbox Game Pass for PC and first information about the next generation console, with a codename Xbox Scarlett. The release dates for all the games and other content are:

Halo Infinite – Holiday 2020, simultaneous with launch of the new console

There were also some sneak peeks at a few games that will be released sometime in 2020. A few of those titles are: Wasteland 3, Psychonauts 2, LEGO Star Wars: The Skywalker Saga, Dragon Ball: Project Z, 12 Minutes, Way to the Woods, Gears Pop!, Tales of Arise, Elden Ring,

Before E3 Bethesda announced that some of the most anticipated projects: The Elder Scrolls 6 and Starfield will not appear on the event. At the same time, there were some other interesting announcements worth mentioning.

A major update called Wastelanders is coming to Fallout 76. Among many other things, it will introduce the Nuclear Winter – completely new battle royale game mode.

A new game by Tango Gameworks, called Ghostwire Tokyo has been revealed during this press conference. It’s a supernatural action-adventure game. The players have to investigate the reason why people are mysteriously disappearing in Tokyo. The release date has not been announced yet, but presumably the game will be available sometime in 2020.

Elder Scrolls Online recently received a new chapter. It’s called Elsweyr and it has been launched a few days before E3. During the conference, two DLCs: Scalebreaker and Dragonhold have been announced.

Wolfenstein franchise announced two new titles. Wolfenstein Cyperpilot is an upcoming VR game where players will hack nazi war machines. The second one is called Wolfenstein Youngblood and it’s a next installment of the main series. The game will include a two players co-op as the two protagonists are the twin daughters of B.J. Blazkowicz – Jessica and Sophia. The game is in alternate history, when in 1980’s the Paris is occupied by Nazis.

Another title announced on Bethesda E3 press conference is Deathloop, a game created by the studio who gave us Dishonored. It’s an interesting concept that features two rival playable characters who are trying to kill each other. There’s no release date yet.

During E3 there was a chance to play the new Doom game – Doom Eternal. Some of the gameplay has also been shown during the conference. One of the most interesting new features is the multiplayer PvP mode, where two players will play as demons trying to kill the single opponent, playing as Doom Slayer.

They announced a new mobile game based on an old game series – Commander Keen and an expansion for Rage 2 called Rise of the Ghosts, that’s supposed to launch later in 2019.

As the cloud gaming becomes the hot new thing, Bethesda also has something to say about this new technology. They announced and showed Orion, a set of tools that’s supposed to optimize game engines for the cloud gaming technology. It’s going to work with every game on every cloud streaming platform.

The release dates of things shown at Bethesda conference are:

The PC Gaming Show on Monday showed a variety of games. We won’t talk about every single one of them here, but these are some that we find the most interesting.

Players will once again have a chance to pilot a newly resurrected – weak vampire in Vampite: The Masquerade - Bloodline 2. This sequel to the 2004 classic game will once more challenge the players with a lot of interesting and difficult choices to make over the course of the game.

Chivalry 2 is another sequel another sequel, this time to a successful medieval battle game. It has announced as an Epic Store exclusive. Some interesting stuff is coming to Warframe players. We don’t know much yet, but the details about new expansion called Empyrean we’ll soon be revealed during the Tennocon 2019 on July 6th.

There’s some news about one of the most interesting upcoming MMO games. Last Oasis got a new trailer on E3. In this based on cooperation, post-apocalyptic, nomadic survival MMO players will create clans and build giant wooden machines called Walkers. They’re somewhere in between ships that sail through deserts and wooden mechs.

A new 4X strategy is coming out really soon. Age of Wonders: Planetfall is an intresting game with some crazy not super serious science fiction setting. The developers revealed that the ultimate goal of the game will be conquering an entire planet. They also talked about some of the ludicrous factions that players will be able to pilot in the game. A trailer for Shenmue III - the long awaited continuation of the eastern martial arts video game series will be launched soon on PlayStation 4 and PC as an Epic Games Store exclusive.

Release dates of those games are:

The first game shown during the Ubisoft E3 conference was Watch Dogs: Legion. In this part of the series players will be able to build a resistance by recruiting various people met in the dystopian London. The game will have a permadeath feature which means that there’s a possibility of losing some of your characters for good.

Rainbow Six Siege gets a new season – Operation Phantom Sight. It launched on June 11th and introduced two new operators: Nokk and Warden. Another game called Rainbow Six: Quarantine has also been announced, it will be a PvE cooperation shooter that’s going to come it in early 2020.

Some more information about Ghost Recon: Breakpoint has been revealed. Trailers gave us a better look at the games’ setting and villains. The main actor who’s portraying the main antagonist – John Bernthal joined the stage to talk about the game.

During the conference, a lot about the future of Division 2 has been announced. Players will get the chance to return to Washington DC and visit locations such as National Zoo and the Pentagon.  June 13-16 players will be able to play for free.

They also announced a new game roller skating derby game that’s supposed to launch in 2020 and Gods & Monsters a new adventure game rooted in Greek mythology. It was developed by the people who worked on Assassin’s Creed: Odyssey. Finally, Ubisoft presented their new subscription based service called UPlay+ that grants the user access to a library of games.

The announced Ubisoft releases are:

Although the Marvel’s Avengers trailer didn’t seem to live up to the hype, there was a lot of other interesting staff on the Square Enix conference. Especially fans of Final Fantasy have a plenty to look forward to.

Final Fantasy VII Remake looks great and everything seems like it’s exactly the kind of nostalgia trip that people were looking for. A lot of game mechanics and characters have been re-introduced during the event.

There’s been a new trailer for upcoming Final Fantasy XIV Shadowbringers. It’s a third expansion of Square Enix’s flagship MMORPG. Like the previous ones it will increase the level cap and introduce new jobs to the game.

Dying Light 2 got a great trailer, while the players had a possibility to play the E3 demo during the event. The earlier delay hot people worried about the state of this title, but these concerns seem to be going away really quickly.

Another new game that has been announced is called Outriders. It’s a science fiction shooter that takes place on an alien planet – Enoch. It will feature a drop-in drop-out cooperation system that encourages playing together with friends in 2 or 3 people group.

Other announcements include new Life Is Strange episodes, a Japanese action RPG Oninaki and a few other remakes and smaller games.

Unsurprisingly, the Nintendo conference was solely focused on the games for Nintendo Switch. One of the biggest titles that gets a Switch version is The Witcher 3. At the same time, Marvel’s Ultimate Alliance 3 got a new trailer.

Of course, they also announced some new games based on the Nintendo intellectual property. The most hyped ones are Pokemon Sword and Shield that will be compatible with the Poke Ball Plus. Gameplay of Luigi’s Mansion 3 has been shown and there was a vague announcement of a sequel to Legends of Zelda: Breath of the Wild. Other news includes a new Contra game, some smaller games and new characters being added to Super Smash Bros. Ultimate.

That would be all for our E3 2019 summary. What games are you waiting for the most and what were your favorite E3 moments? Let us know in the comments!