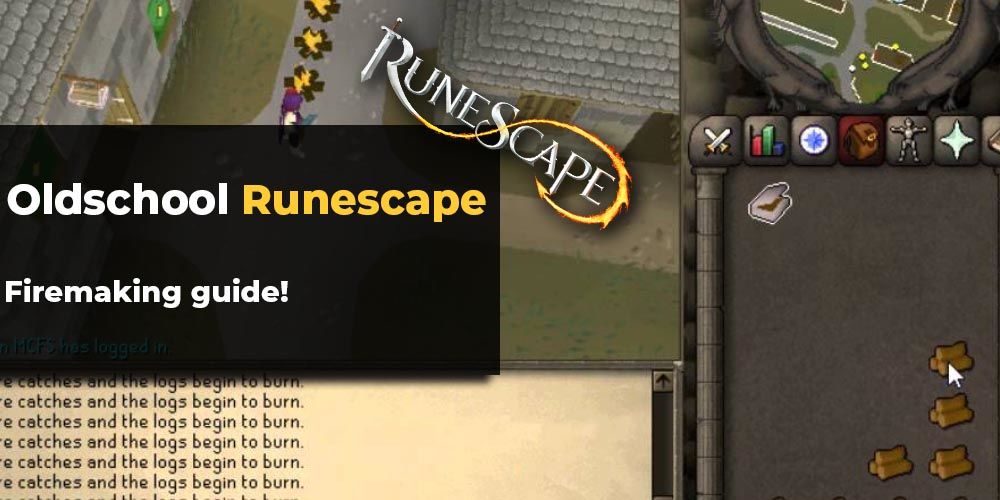 Firemaking is one of the least useful skills in RuneScape. Players who decide to train FM do it usually not for bonuses that come from leveling it but for Firemaking cape which looks good and give an inextinguishable light source. The other reason to train Firemaking is that it is required in numerous quests. This skill is also connected to Woodcutting as you can chop trees and light them up afterwards. Although bonfires made by players can be used to cook various things on them it isn’t usually Cooking levelers first choice since there is a permanent fire in Rogue’s Den which never runs out. Firemaking is available to both f2p and members and is one of the easiest skills to max. In this guide you will find what are the easiest ways of reaching level 99 Firemaking on both free to play and pay to play.

Lighting up a fire 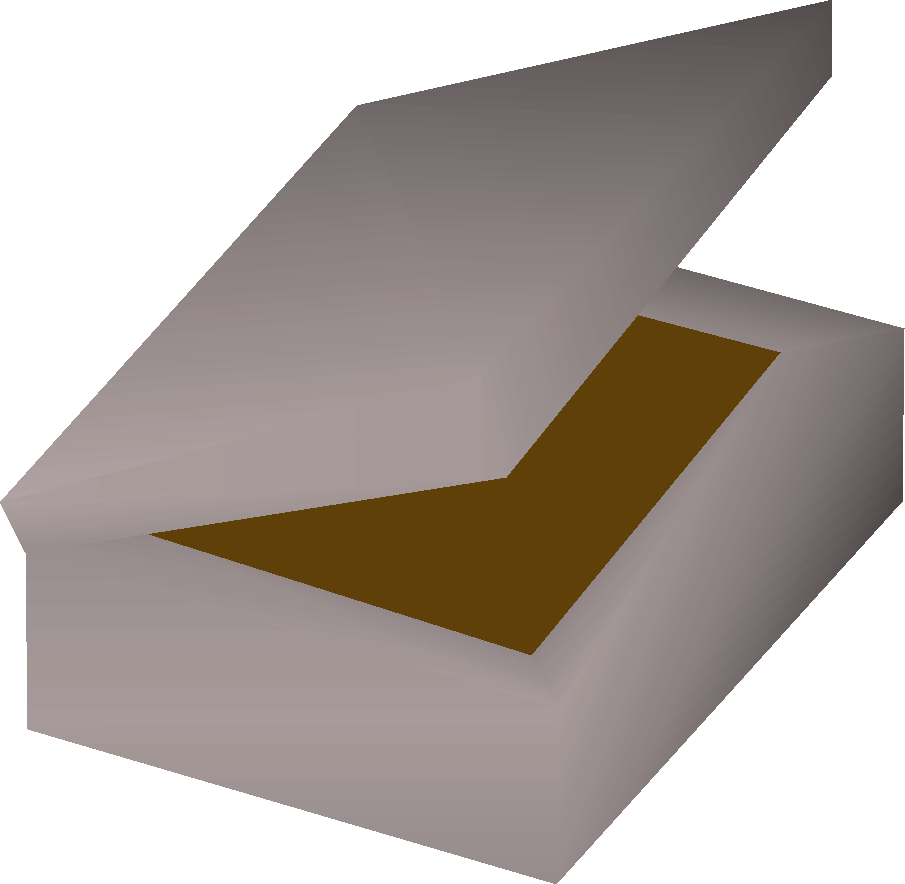 Firemaking training usually takes place in open spaces that are close to the bank because lighting full inventory of logs takes a great amount of free space on the ground. Most common locations to train this skill are Varrock Grand Exchange, outside of Varrocks west bank and Rogue’s Den. You simply want to burn logs to gain experience in FM skill.

Here is the table of logs that can be lit and experience that they grant.

On the beginning of your Firemaking adventure all you need to do is to simply light up 61 normal logs. This will take you from level 1 straight to 15 when we can move on to other tree types. Trees can be found everywhere around Gielinor and there are many locations where they grow near banks. One of these locations would be Varrock west bank. Buy 61 Logs or cut 61 trees and burn their wood to level up your Firemaking to 15.

After getting to 15 level players can light up Oak Logs. These come from Oak Trees and require 15 Woodcutting to be gathered. If you don’t plan on leveling Woodcutting along with your Firemaking skill you can buy Logs off from Grand Exchange. 183 Logs needed in this level bracket. Burning them should take less than 10minutes.

On the next stop of leveling firemaking you want to light up Willow Logs. Willow Trees require 30 Woodcutting and can be found very close to the bank at Draynor Village. Lighting up 101 Willow Logs should take you to 35 level Firemaking assuming you had 30 level when you started. Of course, those logs can be bought from Grand Exchange as well.

After hitting level 35 players can train by burning Teak Logs. Those are a little bit more expensive than Logs before them since most players who train Woodcutting at Teak Trees drop them instead of banking. You will need 373 Teak Logs to get to 45 level which should take less than 100k gold.

At level 45 you gain the ability to burn Maple Logs. This is an extremely cost-effective method of gaining firemaking experience making it the reason why people somethimes burn it all the way to 99. Maple Logs can be easily gathered by managing the kingdom after Throne of Miscellania quest. Because of that, there is a great number of logs listed on Grand Exchange for very cheap prices. If you want a cheaper but slower method of reaching 99 this is the one. Although if you aim for maximum efficiency you will need 295 Logs to level up your Firemaking skill to level 50 for next step.

The quickest way of getting through these 10 levels requires burning Mahogany logs. At this level Firemaking starts to be expensive so if you want to conserve your money just stick to the Maple Logs or scroll down to check Wintertodt guide which can take you from 50 to 99 in a different way than burning logs. If you have the money you can continue with methods below which will be faster but you will spend much more gold. To get level 60 you will need 1095 Mahogany Logs.

From level 60 to 75 you want to burn Yew Logs. You will need 4626 of them to advance through. Getting all of them from Grand Exchange should cost somewhere over 1 million gold. This process usually takes around 3 hours of work in total.

At 75 you want to light up Magic Logs. Those are very expensive as getting to 90 costs around 15mil and requires 13614 of them.

The best way to finish your last levels of Firemaking is by burning Redwood Logs. You will need 22k Logs which will cost around 6mil to get to 99.

Wintertodt is a minigame where players can "fight" Firemaking Boss to get experience in that skill as well as others and it requires level 50 Firemaking. The amount of Firemaking experience gained after defeating the boss is determined by points gathered through the minigame as well as your Firemaking level. 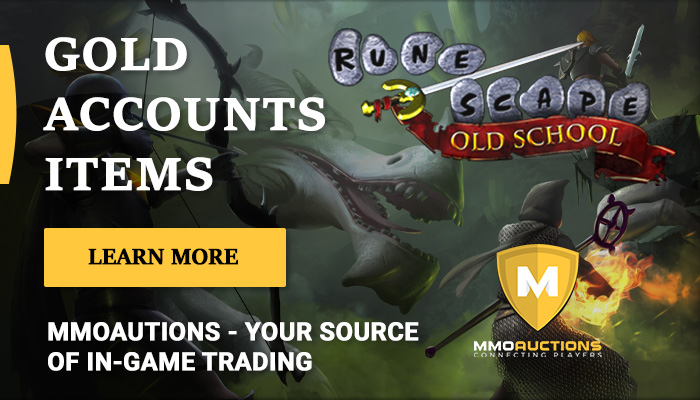 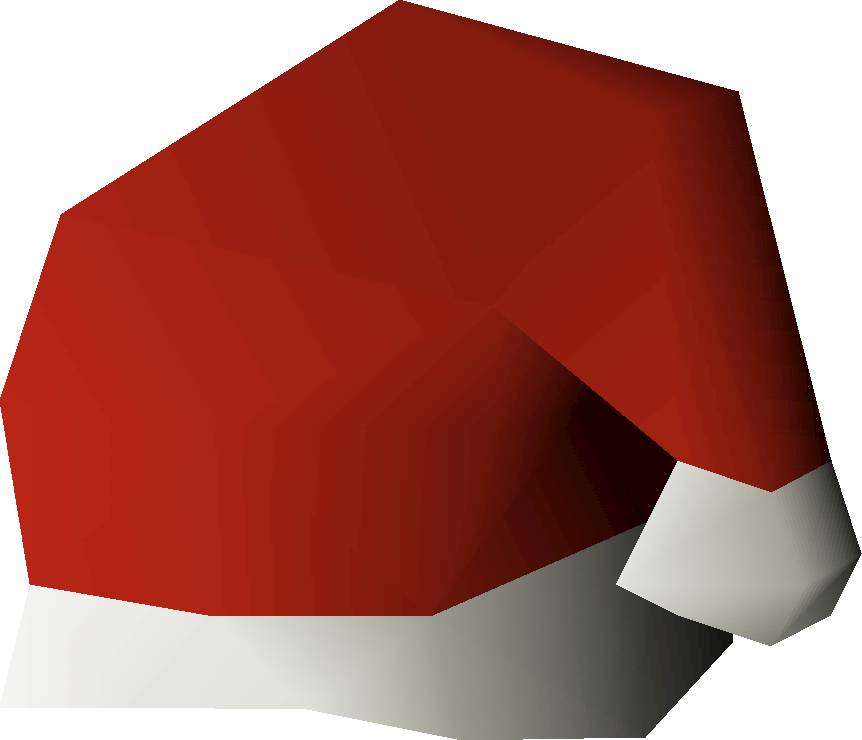 In addition to that, you will need the best axe that you can use, tinderbox, knife, hammer and some food to heal up like Saradomin Brews or wines.

First switch to world 309 which is the official Wintertodt world. To get to this minigame all you need to do is to use the Games Necklace and select teleport location to Wintertodt camp. After minigame starts you should quickly head to south-western brazier and light it up. This will give you additional experience so don’t forget about this part every time you start Wintertodt. Next, go to the nearby root that is lying near the wall and start cutting it for logs. Add logs that you gathered to the brazier that you have lit before. Gaining experience during Wintertodt will mainly revolve around putting logs or kindling to the brazier. Logs do give less experience but overall are the best way to train at the minigame since they can be added very fast. On the other hand, kindling can be added to the brazier too but requires to be fletched from logs which takes time making it not worth the effort. From time to time brazier might break but it can easily be repaired using a hammer which should be done for additional exp.

As Wintertodt is a boss fight minigame you will take damage during the fight. As soon as you leave area with chests on the beginning of Wintertodt you will start taking damage from the cold. This damage is not avoidable and it scales with your hitpoints level. Additionally you can be targeted by a snowfall which will hit in a 3x3 square around you. This can be seen before it happens so players can avoid getting hit by moving out of the area. You can get hit by the snowfall even if it targets someone else so be careful while you are in cold zone. Lastly you can be hurt while brazier breaks if you stay close to it.

While you are at the Wintertodt you will notice a special panel with 4 icons around it. In the center there is an amount of points that you have gained by adding Logs or Kindling to the fire. On the top there is a bar which shows Boss energy and in corners, there are four icons. Each of the icons represents status of the braziers. There are four icons that represent what is happening to each brazier.

Fire on the logs: Brazier is lit and all is fine with it

Crafting icon: Brazier is broken and needs to be repaired

Red hat icon: Pyromancer is down and needs to be healed 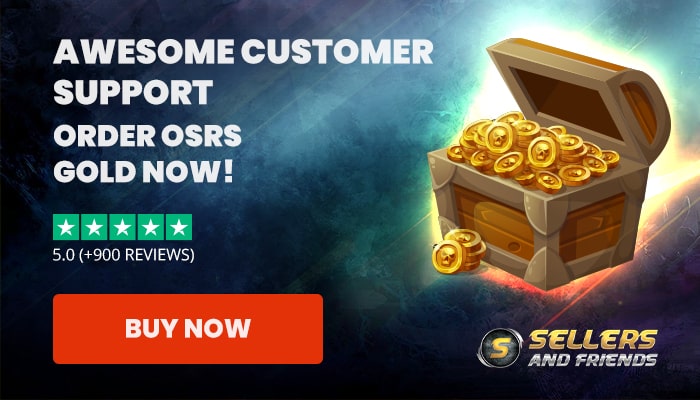 When Red Hat appears as one of the icons in your panel it means that the Pyromancer is down and Logs cannot be added to the brazier. To fix this one of the players at the minigame needs to run to boxes and withdraw unfinished potion from it. After that, he needs to get a herb from one of the plants that grow at the wall and add it to the potion. Such a mixture can heal Pyromancer for 5hp with each dose. Reviving Pyromancer should be avoided as it lowers experience rates gained during Wintertodt. While Pyromancer is down the best thing to do is to go back to cutting more logs.

If you want to get the best possible rewards from this minigame you should aim to gather points and you can rise them quickly by adding kindling, healing a Pyromancer and repairing brazier. Every time you are in Wintertodt you should try to get at least 1 supply crate. Those are given each time you get 500 points so you can get up to 27 supply crates in one game of Wintertodt. Additionally, if you manage to pass 500 points mark but won’t reach the checkpoint to next crate you will get increased chance to get better loot at the crate that you got so every point counts. 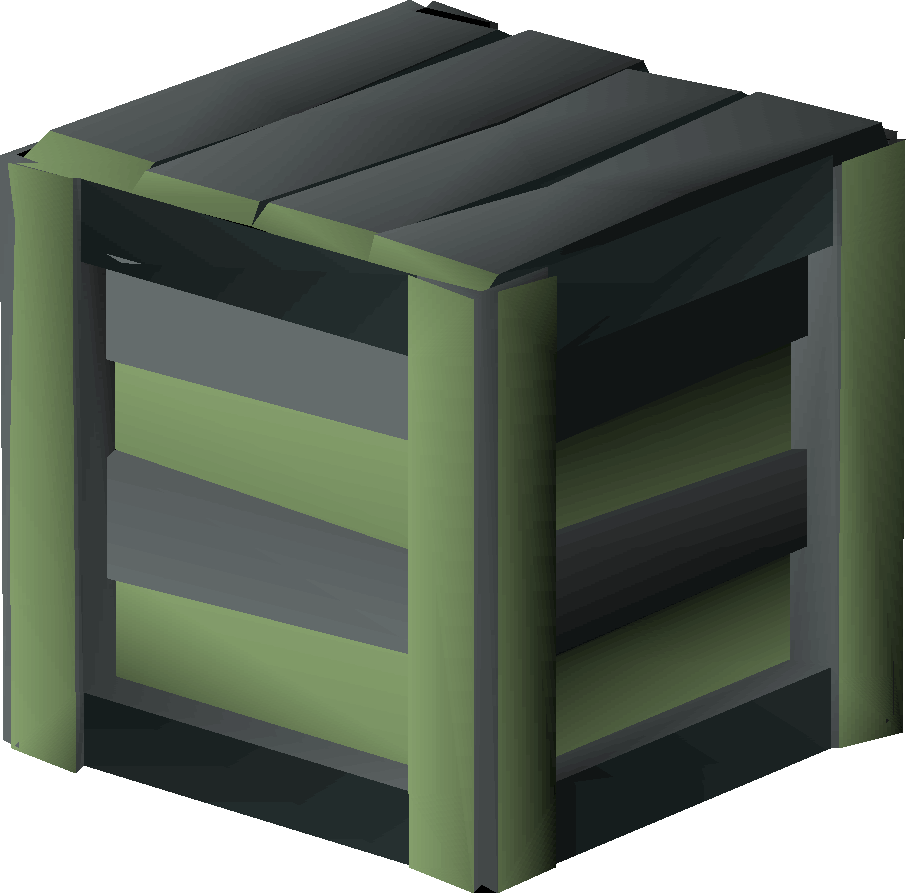 After opening crates player will receive random rewards from it. It is worth noting that these rewards do scale with the player level in certain skills like for example you might get better seeds and bigger quantity as your farming level gets bigger. Wintertodt is definitely profitable since it might drop rare items such as: burnt pages, dragon axe, tome of fire as well as rare seeds, herbs, ores, and fishes. Additionally, crates may contain Pyromancer set pieces which increase Firemaking experience and Phoenix pet which is untradeable. This is a nice money making addition to your Firemaking level training. 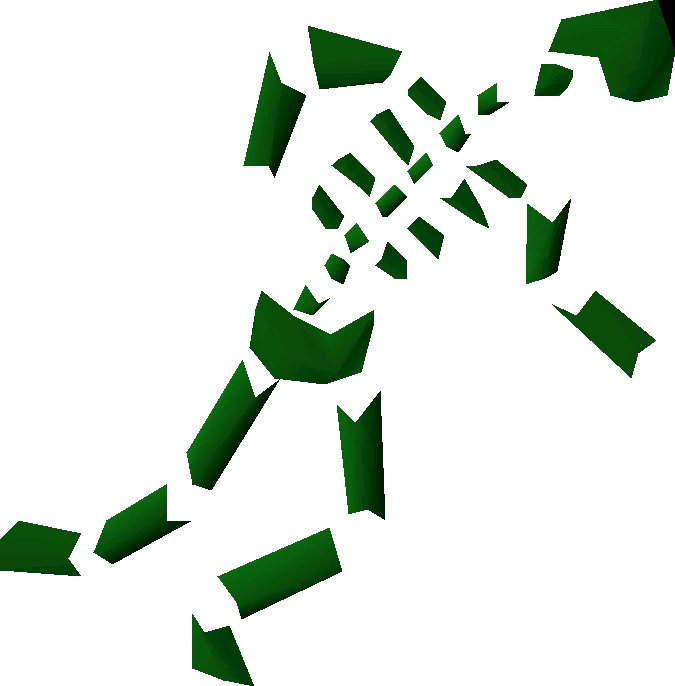 If you have completed quest Shades of Mort’ton you can burn remains by placing special Logs and remains on a certain altar in Morytania. This will reward you with both Firemaking and Prayer experience as well as keys which can later be used to open reward chests. In overall it is a decent method but as Wintertodt give both better exp and better drop rates it should be only done to get some variety into the leveling process.

Firemaking skill is as mentioned before not as useful as other skills but it is one of the fastest to train. The most useful part about FM is Wintertodt which can reward you with good gold per hour if you have high levels in other skills otherwise it is not that good.  If you have spare gold and want a skill that will give you max cape quickly definitely Firemaking is a good choice. Otherwise, it is not as great thing to train as other skills. 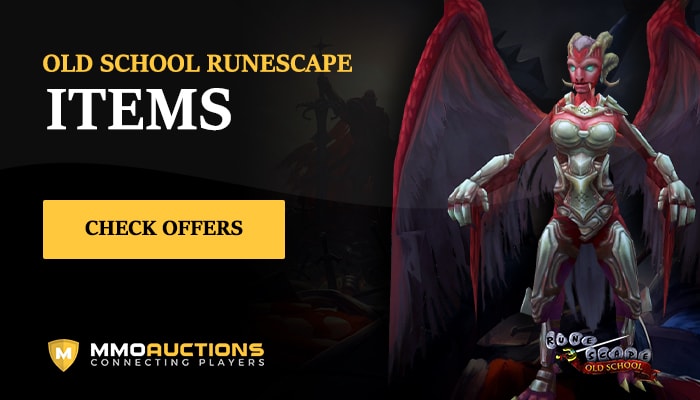 If our 1 99 Firemaking guide was found helpful for you, leave a comment below - we value your opinion.

If you are looking for additional tip and guides referring to other RuneScape skills like Hunter, Attack, Range, Fishing, Fletching, Crafting, Mining, Herblore, Agility, Construction, Smithing, Slayer or any other you can find them on our  site blog page. Additionally we have forums, Facebook and Twitter pages where you can find daily news updates and discussions from the MMO world - make sure to visit them. Join our community and become a part of our gaming world.

For those of you who have questions regarding our Privacy Policy, Terms of Services or any other topic related to out website - you can count on live chat support where you can find help 24/7 each week. 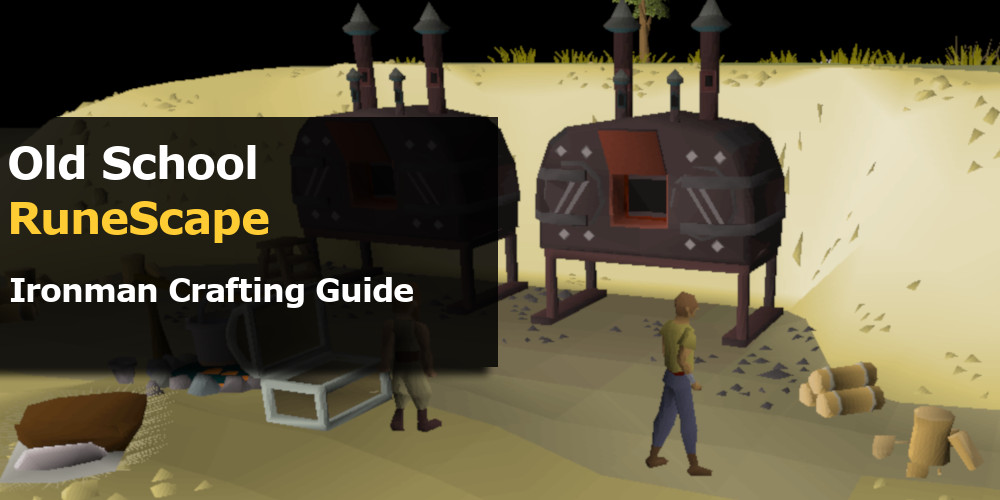 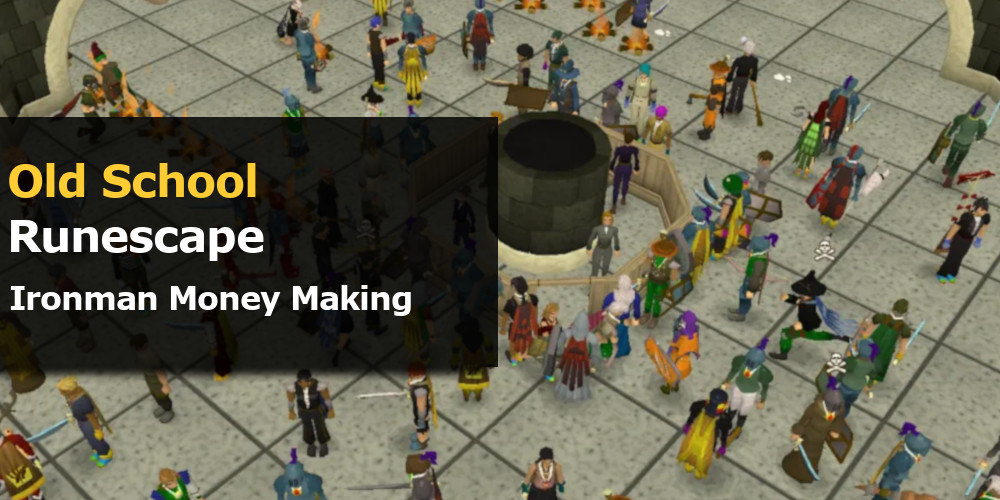 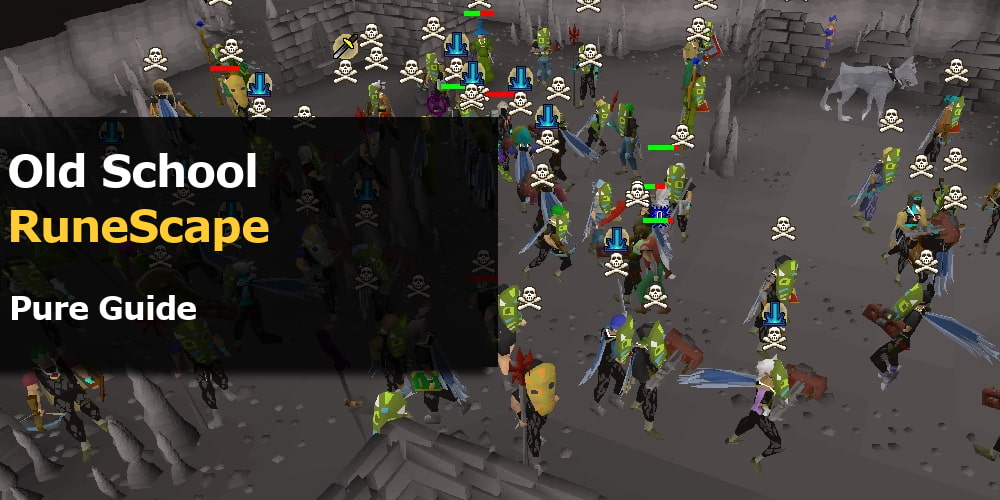 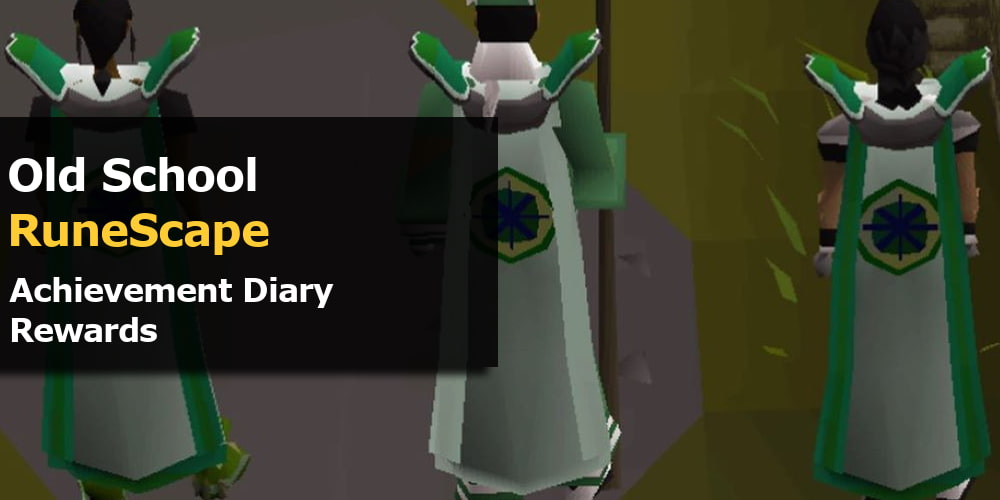